Heinrichau Monastery was built in 1222 as a foundation by the Wroclaw Canon Nikolaus on ducal grounds in the upper Ohletal . The approval for this was given by Duke Heinrich I the Bearded , whose notary Nicholas was. The monastery was settled in 1227 with a German convent from Leubus monastery . In 1228 the monastery church was consecrated and the foundation privilege was issued. After the destruction caused by the Mongol storm in 1241 , the monastery was rebuilt. By clearing the surrounding area and creating settlements under German law, the monastery became an important center of colonization. Politically it belonged to the Duchy of Wroclaw until 1290 , then to the Duchy of Schweidnitz and from 1321 to the Duchy of Münsterberg , with which it came to the Crown of Bohemia in 1336 . For this year there are 44 priests and 30 brother monks occupied.

While it belonged to the Duchy of Schweidnitz, the newly founded Grüssau Monastery was settled with Heinrichau monks at the request of Duke Bolko I in 1292 . In the first half of the 14th century the abbey , which exercised the rulership rights over its possessions, was expanded. There were setbacks during the Hussite Wars . In order to enforce his claims to the Duchy of Münsterberg, Hynek Kruschina von Lichtenburg plundered the monastery in 1442 , as it supported the Münsterberg estates who opposed Hynek Kruschina. In 1501 the abbot rose to become an infuled prelate. After the death of the Münsterberg Duke Charles I in 1536, his sons turned to the Reformation , which also spread Lutheranism in the monastic environment . Due to the associated shortage of young people and resignations, the Heinrichau Convent only had three members in 1553. Therefore, in the same year, the Cologne monks of the Wągrowiec monastery ( Wongrowitz ) moved to Heinrichau. From around 1554 to 1571, the monastery complex was expanded in the Renaissance style. After a fire in 1621 and the effects of the Thirty Years War , the monastery was abandoned.

An economic and pastoral boom took place in the course of the Counter Reformation in the second half of the 17th century. In 1677 a long-term exemption dispute with the Breslau bishop was settled in negotiations . Under Abbot Heinrich Kahlert (1681–1702) the abbey church and the monastery buildings were rebuilt in Baroque style. From around 1650 to 1750, the abbots of Heinrichau and Kamenz took turns in the state governance in the Principality of Münsterberg. In 1699 the monastery acquired the Hungarian abbey Zirc , which perished in the Turkish wars . After the reconstruction, monks and farmers were sent there from Heinrichau and the monastery Zirc was co-administered by the Heinrichau abbot. In 1739 it was possible to acquire the Schönjohnsdorf rule with eight villages , which was adjacent to Heinrichau . The moated castle of Schönjohnsdorf served as the abbots' residence.

After the First Silesian War , the abbey and almost all of Silesia fell to Prussia in 1742 . The subsequent state measures hampered the further development of the monastery, which was completely closed in 1810. Art treasures, the archive and the library were largely given to the state museums in Wroclaw and the abbey church was rededicated as a Catholic parish church.

The monastery buildings and the monastery rule came in 1812 to Princess Friederike Louise Wilhelmine , a daughter of the Prussian King Friedrich Wilhelm II. And later Queen of the Netherlands. In 1863 the property was sold to the Grand Dukes of Saxony-Weimar-Eisenach , who owned it until it was expropriated in 1945. 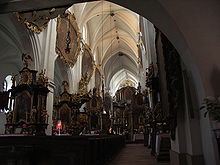 Interior of the monastery church

The Church of the Assumption of Mary and St. John the Baptist , built since the middle of the 13th century, does not follow the original plan. It is a three-aisled, cross-rib vaulted basilica with five rectangular nave and side nave bays, a transept and three narrower choir bays - the end of the choir is straight. The interior is divided into pointed arch arcades. The later access to the east is barrel-vaulted - three vaulted baroque chapels adjoin it. The nave was completed in 1320. The church was redesigned in Baroque style from 1648 to 1698 and from 1702 to 1722. In the north-west is a square, massive tower with an onion dome, which originally comes from the Gothic complex. The baroque facade is decorated with a volute gable. The presented porch with elliptical dome and lantern dates from 1713. The church has a rich baroque interior. The main altar by Georg Schrötter contains paintings by Michael Willmann . The renaissance stalls from 1576 were changed to Baroque style in the second half of the 17th century. For the bas-reliefs on the armrests of the choir stalls, templates by Michael Willmann with scenes from the Grüssau Passion Book were used. The rococo organ prospect in the south and a false prospectus in the north date from around 1750. The pulpit shows the heraldic cartouches of Heinrichau and the Zirc monastery in Hungary.

The cloister is to the right of the church. It was built from 1681 to 1702 using older masonry, later expanded into a secondary residence and served as a technical center from 1945 to 1990, now as a seminary. It is a three-storey three-wing complex, in the northwest and southwest with corner turrets with onion hoods and lanterns.

The monastery complex has two gates from 1680 and 1701 as well as various economic and school buildings, the former hospital and a baroque monastery warehouse.

The Heinrichauer Gründungsbuch is a monastery chronicle written in Latin that was started by the German monks of the monastery after 1250 and kept until 1310. It was discovered by the Breslau university professor Gustav A. Stenzel and published in 1854 under the title Liber fundationis claustri Santa Mariae Virginis or founding book of the Heinrichau monastery in Breslau. The manuscript, which is written on parchment, was bound in smooth parchment with gold decorations in the 17th century. It is now in the collections of the Archbishop's Museum in Wroclaw . In 2015, this chronicle was the monastery from the Middle Ages to the World Documentary Heritage of UNESCO explained.

The records tell of how the monastery came into being, how it acquired its estates and tithes , and promoted settlement in the area. You should also secure the evidence about the rights of the monastery. In addition, the damage caused by the Mongol storm was documented. In addition, there is an indication in the records that the whole of Silesia was surrounded by a system of ramparts and ditches called Preseka or Hag.

Excerpt from the Heinrichauer foundation book

The Latin text from 1270, written by a German monk, contains the sentence “day ut ia pobrusa, a ti poziwai”, which the Silesian Bohemian Bogval spoke to his Polish wife. In translation, this means "Now let me grind and you will rest". The sentence, which has Czech and Silesian influences, is considered to be the oldest surviving linguistic monument of the Old Polish language.