The flour berries ( Sorbus ), and rowan berries , rowan or wild service called, are a genus of maloideae (Pyrinae) within the family of the rose family (Rosaceae). The approximately 100 species are distributed in the temperate areas of the northern hemisphere . All species bear showy fruits in autumn. Some species, such as the Japanese or Kashmir mountain ash, are planted in gardens and parks because of their striking autumn colors. The genus includes the rowan tree , whose fruit is processed into brandy and jam, as well as the service tree , which in the cider production plays a role. In 2017, Senikov & Kurto divided the European whitebeams into several different new types. The generic name Sorbus then only remains with the actual rowanberry ( Sorbus aucuparia L. ). 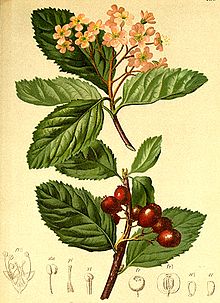 Sorbus species usually grow as deciduous trees and shrubs . The trees are sometimes multi-stemmed and often have a wide spreading crown . Some species reach a height of between 25 and 30 meters. Among the large becoming species include, for example Sorbus pohuashanensis , up to 20 meters tall species that can be found in the mountainous regions of northern China. Most species remain significantly lower. The dwarf whitebeam native to Central Europe reaches a height of about 3 meters. Sorbus reducta , which is native to western China , is only 1.5 meters high and forms dense undergrowth due to its numerous offshoots.

The usually relatively large winter buds are egg-shaped, conical or spindle-shaped and sometimes sticky with a few roof-tile-like covering bud scales that are hairy or bald.

The alternate leaves arranged on the branches are divided into a petiole and a leaf blade. The leaf blades are simple or pinnate. The leaf margins are often serrated, rarely almost entire. The leaf surfaces are hairy or bald or downy. There is pinnate veins . The stipules usually fall off early.

Depending on the species, the flowering period is from spring to summer. The terminal, mostly compound, rarely simple umbrella or panicle inflorescences usually contain many flowers.

The hermaphroditic flowers are radial symmetry and five-fold with a double flower envelope . The flower cup (hypanthium) is bell-shaped, rarely inverted-conical or jug-shaped. The five mostly green sepals are ovate or triangular and hairless to downy or woolly; sometimes glandular hairs are located along the edges. The five free yellowish-white to white-pink petals can be nailed and are hairy bald to fluffy. The mostly 15 to 25, rarely up to 44 stamens are in two or three circles and are of unequal length. The anthers are egg-shaped or almost spherical. The two to five subordinate to semi-subordinate carpels are partially or completely fused with the flower cup. Each carpel contains two or three, rarely four, upright, anatropic ovules , one of which is usually stunted. There are two to five free or partially overgrown styles that are hairy or bald or downy.

The pomegranate fruits of the whitebeam are apple fruits and are reminiscent of small apples , which is not surprising due to the botanical classification in the pomaceous fruit family (Pyrinae) (linguistic confusion with the flour pear is based on this). Similar to the apple , the five sepals are located on top of the fruit, which are durable or fall off and leave a ring-shaped scar. Depending on the species, the apple fruits turn white, yellow, pink, brown or orange to red when ripe. The mostly relatively small apple fruits are egg-shaped or spherical to ellipsoidal or elongated. The skin of the fruit is bare or hairy and there may be small lenticels . The parchment-like core consists of usually two to five, rarely up to seven chambers, each containing one or two seeds.

In the seeds, a thin perisperm and endosperm surrounds the embryo with its two compressed cotyledons ( cotyledons ).

Seedlings and young trees of the Sorbus species are damaged by deer , roe deer , hares , rabbits , voles and mice . Mice and voles gnaw, among other things, the bark or roots of trees and can thereby cause young plants to die.

The larvae of the furrowed vine weevil eat the bark of the roots and in extreme cases can damage a plant to such an extent that it dies. The likelihood that a plant will be attacked by these larvae increases with the humus content of the soil. The expected pest infestation is low in normal soil.

The showy fruits of the whitebeam are eaten by a large number of bird species. The seeds of the fruits usually pass undamaged through the intestinal tract of the birds. The fruit-eating species include blackbirds , thrushes such as red robin , robin and fieldfare, and starlings and waxwings .

The speed with which the fruit hanging on a tree is looted by birds seems to depend on the surrounding vegetation. In the suburbs, McAllister's research shows that ripening Sorbus trees are deprived of their fruit within just a week or two. McAllister attributes this to a higher population of evergreen plants that provide cover for the birds. On the other hand, Sorbus trees that are isolated in a field or on a lawn keep their fruits for months. The type of Sorbus also has an influence on the speed at which birds eat the fruit. The species Sorbus decora , Sorbus cascadensis , Sorbus sitchensis and Sorbus matsumurana are particularly valued by birds . These early ripening species are eaten by birds before they are fully ripe.

The approximately 100 species of the genus Sorbus have a wide natural range in the northern hemisphere and are mainly found in Eurasia and northern North America. A few species are also found in North Africa and Madeira . There are 67 species in China, 43 of them only there. 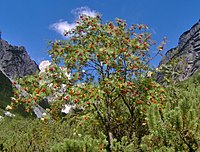 Most species of this genus are typical of their ability to adapt to extreme locations. Trees and bushes of this genus can be found, for example, in exposed rock walls, where they take root in crevices that do not contain much soil. Occasionally you will see young mountain ash growing in gutters. The demands of the Sorbus species on the soil are low and they are able to thrive on nutrient-poor and acidic soils. Most species react to nutrient-rich and humus- rich soils with increased growth. The calciferous species include Sorbus cracilis and Sorbus poteriifolia , which develop chlorosis when they stand on calcareous soils.

Many Sorbus species are sensitive to drought and shed their leaves early in the year after long periods of drought. Species that are native to the Himalayas are particularly sensitive to drought . Dry locations also have an impact on the maximum height growth of a tree. Service trees, for example, in optimal locations in Bavaria and Baden-Württemberg, reach heights of growth of over 30 meters. In locations with less precipitation in the Balkans and France, these trees rarely grow taller than 25 meters. In the mountains, Sorbus species regularly occur up to the tree line . Sorbus species are also among the tree species that thrive in the forest tundra .

There are a variety of hybrids between species within the genus Sorbus . Most of these hybridization processes only give rise to species that are distributed over a small area and that reproduce apomictically by forming seeds in an asexual way by means of agamospermia . Offspring from these seeds are genetically identical to the plant specimen from which the seed was derived.

For example, the complex of bastard whitebeams ( Sorbus latifolia agg.) Includes apomictic species that emerged from hybridization of the service tree ( Sorbus torminalis ) and species of the Sorbus aria group. Another bastard complex has arisen from the rowanberry ( Sorbus aucuparia ) and the rock whitebeam ( Sorbus rupicola ). These include some endemics from England such as the species Sorbus leyana or from Germany with Sorbus lonetalensis , which with only 11 to 16 specimens are among the rarest trees in the world.

The genus Sorbus belongs to the subtribe of the pome fruit family (Pyrinae) in the subfamily Spiraeoideae within the family Rosaceae .

The approximately 100 species of the genus Sorbus include, for example:

Whitberries are by no means as economically important as other pome fruits. The mountain ash and the service tree are of particular economic importance.

The fruits of the mountain ash are used both in wild herb cooking and in herbal medicine. The fruits contain sorbic acid and between 0.02 and 0.30 percent parasorbic acid. After debittering, they are usually boiled into jam, compote or jelly. They are also used to make schnapps, syrup and tea. Folk medicine uses rowan berries for rheumatism , constipation and bleeding, as well as decoction of the fruit as a gargle for hoarseness. In the past, the fruits were also used to produce sorbitol. Sorbitol , also called sorbitol , is a sugar alcohol that is used as an additive in diabetic preparations.

Due to their tannin content, the fruits of the service tree are used as a clarifying addition to cider .

The wood of the service tree , partly also the similar wood of Sorbus domestica is highly prized ( Swiss pear ) and v. a. used as plywood and in the furniture industry. In the past, the dimensionally stable wood was also used to make rulers and slide rules.

In 1993 was in Germany Speierling ( Sorbus domestica ) for Tree of the Year nominated 1997 Rowan ( Sorbus aucuparia ) and 2011 then the service tree ( Sorbus torminalis ).