The title of this article is ambiguous. Further meanings are listed under Hugendubel (disambiguation) .

The family's roots are in Eichstätt . Heinrich Hugendubel opened the first bookshop there in 1869. However, according to the family history, this was soon closed again due to difficulties with the local bishop .

Heinrich Hugendubel headed the company until his death in 2005 as managing partner with the other managing directors Ekkehard Lux, Thomas Nitz, Torsten Brunn, Nina Hugendubel and Maximilian Hugendubel.

In January 2011, the company hit the headlines because the company was accused of censorship in its own union blog. As a result of the cooperation with Weltbild-Verlag of the Catholic Church, a “filter” was briefly used in the Hugendubel online shop, which filtered out numerous gay and lesbian, church-critical, esoteric and communist articles. After unanimously critical media coverage, the filter was removed and the corresponding titles were listed again.

“Reading islands” of the branch on Munich's Marienplatz during Christmas business

The Hugendubel bookstore owned a small publishing house that focused on entertainment literature in the 1930s. The company entered the larger growth phase in 1964 with the establishment of a branch network in Munich. The branch on Marienplatz brought its business breakthrough in 1979 with the innovative design that mixes elements of classic department stores with elements of modern city libraries: platforms with comfortable seating areas protrude from the stairwell and are visible from all sides, allowing customers to come along Withdraw books for reading while otherwise the house orients itself towards visitors moving freely around the bookstore. Shop counters have been dismantled in favor of information stands where you can do research with the sales force. Goods are laid out in large piles on tables to be picked up. With the new concept, the company succeeded in breaking up the confrontational situation in which the customer had to enter into a consultation. The cooperation with large publishers, from which books are bought in significantly larger batches, allowed sales increases and ultimately the step into a book trade that sells books as mass-produced goods. Hugendubel built houses with the new design, avoiding a direct confrontation with the Hamburg rival Thalia , primarily in southern Germany.

The company expanded its publishing business in the 1980s by acquiring Diederichs Verlag and by focusing Hugendubel Hausverlag on esotericism and life guides.

Since 2006, Hugendubel has been advancing the further development of the electronic merchandise management system bookhit ® to meet his needs, which had previously been used by 350 branches of Weltbild plus , Weltbild! , Jokers and Wohlthat'sche was used.

On August 17, 2006, the company announced the formation of the DBH Buch Handels GmbH & Co. KG group of companies. As of January 1, 2007, the branch business of the booksellers Habel, Hugendubel, Weiland , Weltbild and Wohlthatschen, which at that time remained legally independent, was combined under the umbrella of this new financial holding .

In 2008 the company acquired 50% of the shares in the Donaukurier book trade subsidiary Ganghofer GmbH .

In June 2009 a restructuring program became known. It plans to cut 179 of around 1,500 jobs in Germany, revise the product range and reorganize the service area. As of January 2011, the remaining branches of Buch Habel were renamed Hugendubel . The branch in downtown Nuremberg was closed in 2011. The largest Berlin branch on Kurfürstendamm was closed on March 3, 2012.

In April 2012 it was announced that DBH had completely taken over Weiland and that the Weiland, HERON and Deuerlich stores would be renamed Hugendubel in November 2012 . The Weiland headquarters in Lübeck will be integrated into the Hugendubel headquarters in Munich. Managing Director Henning Hamkens will leave the company at the end of 2012. Since May 2012, the last two Schmorl and Seefeld branches in Hanover have been continued under their own company name. The branches had already become the property of Hugendubel in 2007.

In 2012, the parent company on Salvatorplatz also closed, which was recently home to English books and the second-hand bookshop.

At the beginning of 2014, following the insolvency of the Weltbildgruppe, the relationship between the two companies under the umbrella of the financial holding DBH Buch Handels GmbH was largely dissolved. Weltbild pulled around 220 branches out of the joint holding company, in which 77 branches remain in 48 cities, which will continue to operate under the name Hugendubel. The bookshops in Karstadt department stores, which were previously run under the name Weltbild , will in future run as Hugendubel branches. The holding also remains with Hugendubel, so around 2000 of the 3000 jobs in the holding can be retained.

In July 2015, Hugendubel took over the majority in eBook.de and continues the brand under the umbrella of Hugendubel Digital GmbH & Co. KG. The previous eBook.de owner Libri is now concentrating exclusively on the role of technology and logistics partner .

At first it looked as if the company would have to close its branch on Marienplatz in Munich by the beginning of 2016 because the lease was not extended. After the closure of the main store, this branch, which was established in 1978 as the first book department store in Germany, is the core of the company. The branch was the first German bookstore to have more than 2000 m² of sales area and is characterized by reading islands on the mezzanine floors, where books can be read in detail or compared. An agreement was reached with the new tenant, Telekom Deutschland , from whom Hugendubel can take over part of the building as a subtenant. The branch was reopened in August 2017. After the renovation, the branch will have an area of ​​1200 square meters; previously it was 3,600. 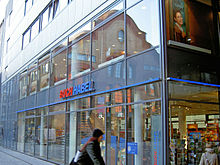 In 2014 a turnover of 257 million euros was achieved. There are currently around 100 branches in Germany, including over 20 shop-in-shops at Karstadt. In addition to the two internet shops hugendubel.de and ebook.de, the company has stakes in the following companies:

From July 2008 sales areas were added in some of a total of 38 Karstadt branches (so-called shop-in-shop system). This deal came about due to the failure of the cooperation between Thalia and Karstadt. The new sales areas were divided within the DBH department store . In selected larger Karstadt stores, books are sold under the name Hugendubel (including in the Berlin KaDeWe and in the Karstadt am Berlin Hermannplatz), otherwise under the name Weltbild. Since 2013, Hugendubel Fachinformationen GmbH has been offering special offers for large and business customers as a subsidiary.

Once a month Hugendubel presents his book tip. Here are reviews given and presents background information on the authors and the stories. In addition, information on events for readings, information evenings, book presentations with well-known authors, book premieres or literary competitions is reported from the Munich branches at Marienplatz , Stachus and the Fünf Höfe . The Hugendubel book tip is produced and broadcast by münchen.tv . 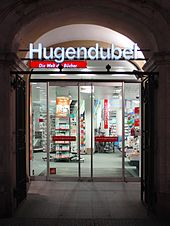 Entrance Hugendubel on Karlsplatz in Munich