The city is located in Upper Silesia , about 25 kilometers north of Katowice and about 170 kilometers southeast of Wroclaw . 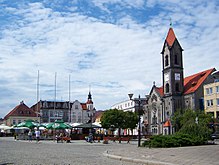 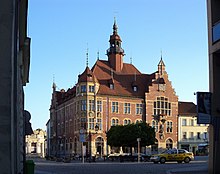 The city goes back to the discovery of silver deposits in the area and their exploitation. In 1526 Tarnowitz received mountain freedom from Duke Johann II. And Georg von Brandenburg-Ansbach, Duke of Opole . The mining law (a special form of town law) dates from the same year. On July 25, 1562, Georg Friedrich I of Brandenburg-Ansbach-Kulmbach awarded the city the coat of arms that is still in use today.

In 1873 the district of Tarnowitz was spun off from the district of Beuthen , whose district town became Tarnowitz. At the beginning of the 20th century, Tarnowitz had a Protestant church, two Catholic churches, a synagogue , a secondary school, a mountain school, an agricultural winter school, a preparatory institute and a district court.

Even if 7,451 or 85.2 percent of the valid votes were cast in Tarnowitz in March 1921 in the referendum in Upper Silesia after the First World War in favor of remaining with Germany, the city had to be ceded to Poland in 1922 and became the district seat of the Powiat Tarnogórski ( Tarnowitzer Kreis ) in the Autonomous Voivodeship of Silesia .

The historic silver mine (Zabytkowa Kopalnia Srebra) with its drainage was on 9 July 2017 the UNESCO has been added to the list of World Heritage at the 41st Conference of the World Heritage Committee in Krakow. The mine is one of the most important cultural monuments in Upper Silesia.

In Tarnowitz the first steam engine of the Kingdom of Prussia (the third on the European mainland) was put into operation on January 19, 1788 . It drove the drainage system of the Tarnowitz ore mines. The mine includes the deep Friedrichstollen with the "black trout tunnel" (Sztolnia Czarnego Pstrąga).

Have worked on site

Towns and municipalities in the powiat Tarnogórski