Confession of the German professors to Adolf Hitler

The commitment of the professors at German universities and colleges to Adolf Hitler and the Nazi state was founded on November 11, 1933 to celebrate the " National Socialist revolution" of the year at a ceremony in the Albert Hall in Leipzig as a pledge of German scholars - mostly in the civil service  - carried forward . But not all of the signatories were professors; there are also private lecturers, lecturers, lecturers and even individual students among them. The title was “With Adolf Hitler for the German people's honor, freedom and justice!” Other names in the journalism of the time, in official documents and thus in historiography are “Demonstration of German Science” or, for short, the professors' professorship and call to the Educated in the world . 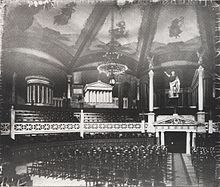 The rally was hosted and published by the National Socialist Teachers' Association of Saxony. The event took place on the day before the “referendum” on the departure of the League of Nations on October 14th , which was coupled with the Reichstag election of November 1933 and a sham election because there were only NSDAP candidates. The confession was thus also a call for elections. In several speeches, Germany's alleged will to peace was emphasized, which should be striven for alongside freedom and honor. The withdrawal from the League of Nations was justified with the striving for equality of Germany on the international stage, which could only be achieved by withdrawing without the discriminatory provisions of the League of Nations. The scientists signed despite the fact that the National Socialist state had previously massively interfered with the academic freedom of teaching of universities through the law to restore the professional civil service , by expelling scholars of Jewish faith or origin or democratic convictions from office. The self-determination of the universities had also been abolished by the introduction of the Führer principle , and the NSDAP had gained a decisive influence there.

The Saxon NSLB governor Arthur Hugo Göpfert , in cooperation with the State University of Leipzig , called for a “Confession of Free and Politically Unbound German Scholars” to be published, a “Call to the world's educated”. This “reputation” promised a “ people-related cultivation of science” from which alone the power of science to unite people could grow. It went on: “Based on this conviction, German science appeals to the educated around the world to show the struggle of the German people, united by Adolf Hitler, for freedom, honor, law and peace with the same understanding that it does for its own people expect". The accompanying speeches were given one after the other by the rector of Leipzig University, the veterinarian and animal breeder Richard Arthur Golf , who had been the liaison professor of the NS student union even before the seizure of power , as well as Eugen Fischer , Martin Heidegger , Emanuel Hirsch , Wilhelm Pinder , Ferdinand Sauerbruch , Eberhard Schmidt , the theologian Friedrich Karl Schumann and the Germanist Friedrich Neumann .

Göpfert, a teacher, b. In 1902, he became Ministerialrat in 1933 , from March 1935 head (without a ministerial title) of the Ministry of Education in the State of Saxony alongside his party functions.

Overview of the universities represented

In the document, almost all the names of the signatories are assigned to their universities. At the end there are still a few unassigned scientists, most of them from the University of Leipzig, which is not listed in the overview, although its rector was one of the speakers. Most of the names came from Hamburg University, then from Göttingen and Marburg. Among the universities there are four Catholic Church universities in Bavaria, all of which have rectors signed: Adolf Eberle , Franz Heidingsfelder , Max Heuwieser and Michael Rackl .

A page with signatories of the confession, especially from Marburg and Hamburg

A total of around 900 people signed.

In his analysis of the signatures of Hamburg professors, the ethnologist Hans Fischer explains that it is not clear "how the 'signatures' for this creed came about, nor what exactly the creed is". He refers to the fact that the preceding “Call to the educated of the world”, to which the signatures presumably apply, essentially speaks of “unlimited intellectual development and cultural freedom”, while the National Socialist content is mainly contained in the speeches be. He also believes that there are “doubts about the authenticity of Hamburg's 'signatures'”. He points out that the Hamburg signatures include "earlier or later opponents of Hitler like Flitner and Degkwitz ". 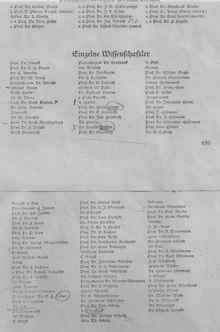 Pages with individual signatures mainly from the University of Leipzig

“A mighty master builder drew the crack and directed the construction and, through the power and magic of his personality, managed to pull a whole large 65 million people along [...] into a mighty wave of building and working on this new state . That's what the world calls revolution [...] because it came like a storm, [...] because a man's essence, a man's will, has broken away what was rotten and bad, and has given a people new ideals as guidelines in the German style in custom, calm and order [...] we scientists build with [...] following the new state wholeheartedly "

“German teachers and comrades! German national comrades! [...] We have renounced the idolatry of bottomless and powerless thinking. We see the end of the philosophy that serves him. We are certain that the clear harshness and the work-appropriate security of the unyielding simple questioning about the essence of being will return. The original courage to either grow or break in the confrontation with beings is the innermost motivation for asking a folkish science. [...] The National Socialist revolution is not just the takeover of an existing power in the state by another [...] party, but this revolution brings about the complete upheaval of our German existence. From now on, every thing demands a decision and every action demands responsibility. "

Wilhelm Pinder (Munich): He refers to the celebration of the 10th anniversary of November 9, 1923 and describes the staging of this commemoration, which deeply moved him:

“It hasn't been since the days of drama . It was no longer theater, it was no longer the separation between players and spectators, stage and audience […], the community was there again. Everything worked together. This is more than a picture [...] This is style, that is, the inseparable union of the community to form, an involuntarily created symbol for the content that thousands perceive, the design of everyone in the expression of their own life. "

Although in the aftermath of the rally in the winter of 1933/34 almost all professors were asked to sign the “call” across the Reich, a number of universities are missing, such as Bonn, Cologne, Frankfurt, Freiburg and Munich. So far only one faculty is known that refused to sign the "Ruf" as a whole, that of Protestant theology in Marburg . The dean of the faculty, Hans von Soden , wrote the rector in cautious language that they were not against the new state, but against this declaration. Formally he objected that the “call” was being propagated at that time as part of a larger memorandum , the future context of which could not be determined. He wrote that the confession was so self-evident in his statements that no signatures were actually required for it, so there was probably more to it. Abroad, the reputation would not have the desired effect, as the faculty knows from contacts abroad. The referendum on November 12, 1933 to withdraw from the League of Nations was approved. Above all, the theologians opposed the formulation of the “call” that, for the first time since Fichte's time, the representatives of German intellectual life as guarantors of the National Socialist state appear before the world public with a political commitment. The sentence would be dismissed as wrong by all those who are knowledgeable abroad. Furthermore, the theologians did not want NS organizations (named by name) to determine who is allowed to sign and who is not, because in various letters accompanying the collection of signatures and money, "Jewish" and other, differently and subtly circumscribed non-Nazis were from the signature been excluded. The theologians countered this with their professional solidarity among faculty colleagues.

The Romanist Victor Klemperer (Dresden), who was of Jewish origin, voted no twice in the referendum, his wife gave blank pieces of paper. In his diary, Klemperer noted: "That was almost a brave act, because everyone was expecting the breach of voting secrecy."