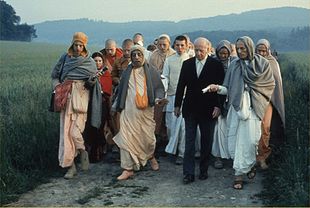 Dürckheim was born in Munich as the son of Friedrich Georg Michael Maria Count Eckbrecht von Dürckheim -Montmartin (1858–1939) and Sophie Evalina Ottilie Charlotte von Kusserow (1869–1959). His maternal grandfather was the Prussian diplomat and politician Heinrich von Kusserow (1836–1900), whose mother was a daughter of the Jewish banker Salomon Oppenheim and who in turn married Antonie Springer, a daughter of the Jewish banker and businessman Ernst Springer.

Dürckheim attended the Realgymnasium in Koblenz (residence Schloss Bassenheim ) and Weimar , graduated from high school and at the age of 18, eventually as a lieutenant , took part in the First World War in the body regiment of the Bavarian army . He experienced the fighting at Verdun without being wounded. In 1919 he fought in a volunteer corps against the Munich Soviet Republic . He studied in Munich , first economics , followed by philosophy and psychology. He was in a circle of intellectuals and a. with Ludwig Klages and Rainer Maria Rilke . In the early 1920s he dealt intensively with religious studies and religious psychology . According to his own account, he experienced a kind of satori by reading the Dao-De-Jing . With the Weinhandl couple, the philosopher Ferdinand Weinhandl and the writer Margarete Weinhandl , he began mystical exercises and studied Master Eckhardt . He moved with them to Kiel and lived there in a shared apartment. In 1923 he received his doctorate at the University of Kiel with the thesis "Forms of experience - approaches to an analytical situation psychology". In the same year he married Enja von Hattingberg, with whom he went to Italy for a year in 1924, whereby the parents continued to provide for his living. From 1927 he was employed as an assistant to the founder of the second Leipzig school and holistic psychologist Felix Krueger at the University of Leipzig , where he completed his habilitation on February 17, 1930. Due to the global economic crisis, his parents lost the family estate in Steingaden .

On behalf of the Federal Foreign Office

From 1930 to 1932 Dürckheim also taught psychology at the Bauhaus in Dessau. In 1931 he received a professorship at the Wroclaw Pedagogical Academy , after which it was closed in 1932 in Kiel (renamed the University of Teacher Training in 1933 ). In November 1933 he signed the professors' declaration of Adolf Hitler at German universities and colleges . In 1934, Reich Education Minister Bernhard Rust sent him to South Africa to investigate German abroad . Through contacts with Karl Haushofer , Dürckheim switched to Joachim von Ribbentrop in the Ribbentrop office in 1935 . He was introduced to Hitler and later brokered his meeting with Lord Beaverbrook . According to the Nuremberg Laws , however, he was considered a “quarter Jew” , which is why he was dismissed by Ribbentrop in December 1937.

However, he remained in the civil service. With the task of looking after German abroad as explicitly specified by Rudolf Hess , he was sent to Japan as an associate member of the press department of the Foreign Office 1938–1939 and 1940–1945 . In Japan, Dürckheim allegedly experienced another satori at a tea ceremony , which is why the Japanologist Hermann Bohner, who works in Osaka , dedicated his translation of Zen words in the tea room to him in 1941 . 1940 his wife died in Germany. The following year, after “reporting” in Berlin, he was again in Japan with the task of maintaining contact with Japanese scientists and contributing to research into the “basics of Japanese education”. During this time he also did National Socialist propaganda work in Japan. From 1938 Dürckheim had first contact with Zen (including Awa Kenzo , the same Zen archery teacher as Herrigel ). He was enthusiastic about the "soldier orientation" of Zen Buddhism , i. H. for the "educational nature of war" in the sense of Bushidō . He published Neues Deutschland - deutscher Geist , Tōkyō in Japanese in 1942. On the Fuehrer's birthday , he gave a two-hour speech on the subject in front of the German-Japanese cultural institute in Kumamoto .

In 1944 he was awarded the War Merit Cross, Second Class. "The immeasurable suffering that is in Germany today will bring the German people one step higher and give birth even more to themselves and deeper attitudes to life," he wrote to a friend in the last days of the war.

For him, the war became a personal individuation experience from which he developed his therapy.

From October 1945 to May 1947 he was interned for 16 months . Like all Germans who arrived in Japan after 1933, he was repatriated by the American occupation forces in 1947 . In Germany he met the widowed Maria Hippius again, to whom he moved to Todtmoos in 1948 and who became his second life partner. In Munich he did his psychotherapeutic training analysis with Gustav Richard Heyer . In 1951, the couple received a cheap house in Rütte (a district of Todtmoos), the so-called “Doctor's House”, where medical treatment took place. It became the existential psychological education and meeting place, school for initiatic therapy of the "Rütte work".

Since 1970 he has gradually gone blind. In 1985 he formalized his marriage to Maria Hippius. Public recognition slowly set in. B. through the honorary citizenship of Todtmoos. A television film paid tribute to him on ZDF. He continued the work with meditations and lectures. Dürckheim died after a long illness at the age of 92 in Rütte. He is buried in the family crypt of the Dürckheim-Montmartin family in the Johanneskapelle in Steingaden .

After the Second World War, Dürckheim developed initiatic therapy . In this form of therapy he merged several psychological directions. On the one hand, he shows himself to be influenced by depth psychology (Dürckheim completed his training analysis with a student of Alfred Adler ), in particular the analytical psychology of Carl Gustav Jung . However Dürckheim is in its therapeutic practice very much related physical than Jung, which he obtained by Wilhelm Reich in the Neo-Freudianism reconstructs accomplished turning to a resolution-related mental biological tension by means of a body-therapeutic methods. As a second source, parts of his holistic psychological training flow in this direction. In this endeavor he is similar to the psychologist Fritz Perls with his gestalt therapy . As noted in the analytical psychology guys and the psychodrama of Jacob L. Moreno , Dürckheim also builds elements of the visual arts (clay work, ink drawings) and drama (role playing) in his therapy with one. Apart from these psychological sources, Dürckheim is said to have been influenced by the Italian philosopher and pioneer of fascism Julius Evola in the development of his initiatic therapy .

Together with his wife Maria Hippius, Dürckheim expanded his initiatic therapy into his own therapy concept. Together with Hippius he set up the “existential psychological educational and meeting place” in Rütte. At the same time he began a lively publication activity on the subject of Zen.

One of his and Maria Hippius' students, who expressly professed initiatic therapy, was the actress, psychologist and psychotherapist Vera Kohn , who emigrated from Prague to Ecuador in 1939 and who had undergone therapy and training in Rütte between 1957 and 1961.

However, the initiatic therapy is not without controversy: the Japanologist Achim Seidl, who was supposed to write a book with Dürckheim, accused him of the fact that his detached language hardly had anything to do with the simplicity of Zen. Like Hugo Makibi Enomiya-Lassalle , Dürckheim contributed to the spread of Zen and Zen meditation in Germany by training meditation teachers.

While Dürckheim's commitment to non-denominational pastoral care is hardly known today, he is one of the classics of transpersonal psychology alongside Roberto Assagioli and Stanislav Grof . His contribution to Volume XV “Transcendence, Imagination and Creativity” of the multi-volume work “The Psychology of the 20th Century”, published by Kindler Verlag, gave him his own place in the history of psychology in the 20th century.

Note: The Japanese-language titles listed are bibliographical only in Japan. His personal identifier (著者 名 典 拠 ID) from the "National Diet Library" is: 00465198