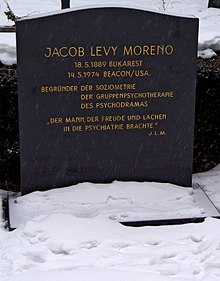 Jacob Levy Moreno (born May 18, 1889 in Bucharest , † May 14, 1974 in Beacon , New York ) was an Austrian - American doctor , psychiatrist , sociologist and the founder of psychodrama , sociometry and group psychotherapy .

Jacob Levy Moreno, born Jacob Levi , was the son of the Sephardic merchant Moreno Nissim Levi and his wife Pauline Iancu (* 1874). In a self-definition, Moreno chose May 16, 1892, the commemoration day of the expulsion of the Jews from Spain , as the date of his birth.

According to his autobiography, he was born on a stormy night at dawn on the Sabbath during a boat trip from the Bosporus to the Romanian city of Constanta on a ship of unknown nationality. Moreno's statements may, however, be questioned and correspond more to a “psychodramatic truth” than to verifiable events.

The years in Vienna

As a child at the age of four, Moreno experienced his family's flight from poverty and pogroms to Vienna , where he grew up. After his family moved to Berlin, Moreno returned to Vienna alone at the age of 14, where he first studied philosophy and then medicine from 1909 after attending a Jewish school. He partially financed his studies as a private tutor, e.g. B. by Elisabeth Bergner . He completed his medical studies on February 5, 1917.

Even as a teenager he was fascinated by the impromptu theater , which at that time was experiencing an extraordinary heyday in Vienna - at times there were supposedly up to a hundred impromptu stages. He also admired the spontaneity and creativity of the children playing in the park.

During his studies he dealt with social marginalized groups and after his doctorate worked as a doctor in the Mitterndorf refugee camp , Lower Austria. His observations led him to suspect social attractions and repulsions and to see more in the group than the sum of its members. These experiences formed the basis for his later work on sociometry, action research and the development of the method of psychodrama . From 1918 to 1925 he worked as a company doctor in the Vöslauer Kammgarnfabrik and as a community doctor in Bad Vöslau . At the same time he belonged to expressionist artistic circles in Vienna (editor of the magazine Daimon ). His radical concept of an impromptu theater (“theater of spontaneity”), which he developed in the meantime, was not, however, granted much “public success”. After all, Elisabeth Bergner and Peter Lorre gained their first theater experience with him.

His honorary grave (Department 1, Ring 1, Group 5, Number 1) is in the urn grove of the Simmering fire hall .

The years in America

In 1925 he traveled to the USA at the invitation of an electrical company (Moreno had developed an electromagnetic recording method together with the brother of his partner) , where he subsequently stayed. The main reason for this development was probably that he experienced stagnation both artistically and as a medical pioneer. He struggled hard for the first five years. He finally received help from the child psychologist Beatrice Beecher, whom he married in 1928 in order to get a residence permit. However, his work with children, sociometric studies with prisoners in Sing Sing and girls in a correctional home soon found a positive response. His early experiences in America flowed into his major work Who shall survive? a. In 1936 he took over a small psychiatric clinic in Beacon (USA), where he further developed his therapeutic approach of psychodrama (psychotherapy using impromptu play) to maturity.

Moreno developed the psychodrama as " the method that fathoms the truth of the soul through action " with the aim of " releasing human spontaneity and at the same time integrating it meaningfully into the entire structure of human life ". He developed sociometry for diagnosing group relationships, and expanded role theory for group psychotherapy. He was the first to use the term “ group psychotherapy ”.