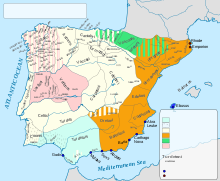 Distribution map of the Celtic and Iberian tribes around 300 BC Chr.

Scheme of a Celtiberian grave

In a narrower sense, the Celtiberians are a group of tribes who lived in central and northern Spain before Roman times or in the transition area between the Iberian tribes along the Mediterranean coast of the Iberian Peninsula and the Celtic tribes in the interior of the peninsula. The Celtiberian tribes include: Arevacians , Titos, Beller, Lusonen and Pelendonen , sometimes also Vaccaei , Carpetani , Olcades and Lobetani. In a broader sense, it erroneously means the entirety of all ancient Celtic and Iberian tribes on the entire Iberian Peninsula.

It is unclear whether and to what extent the Celtiberian tribes actually emerged from a mixture between Celts and Iberians or essentially represent one of the two groups. Possibly it was more a kind of symbiosis or just a different, not always peaceful, interdependent neighborhood with a certain mutual cultural influence. The designation "Celtiberian" corresponds to the finding that both Celtic and Iberian elements can be recognized. Archaeological finds produced mostly metallic objects, such as horse harness and weapons. The swords found are said to have served as a model for the Roman gladius . A language of the Celtiberians or a language union is sparsely documented by inscriptions ( Celtic language certificates in Iberian script ) and place names.

Chroniclers describe the Celtiberians as warlike. In the 2nd century BC They were subjugated by the Romans. At least the Iberians in the Roman cities were gradually Romanized, Christianized and Roman citizens as a result. In contrast to these assimilated Ibero -Romans (Hispano-Romans), some mainly Celtic tribes on the less Romanised land fought together with the Bagauden and Suebi against Roman rule at the beginning of the fifth century .

Two Roman auxiliary units were set up from the tribes of the Celtiberians: