Since the area of ​​Malta is relatively small, there is a very high population density of around 1298 inhabitants per square kilometer. This means that Malta has the fifth highest population density in the world and the third highest in Europe. An estimated 94% of the people live in cities, only 6% live in the countryside. The population growth of Malta is about 0.31% per year.

Gozo has about 30,000 inhabitants, Comino has five permanent residents. In the summer, Comino is also home to a couple who lease the hotel complex, a police officer and a few farmers, and during the season there are also tourists who love seclusion. 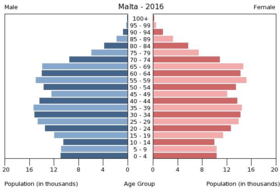 The population of Malta and Gozo developed as follows from 1842 to 2011:

The Maltese population is very mixed and can be traced back to different waves of immigration. After immigrants of hardly definable origin in prehistoric times, Phoenicians , Greeks , Romans , Arabs , Sicilians and Normans settled the archipelago. However, all of these immigrants merged into a fairly homogeneous population over the course of the Middle Ages . Approximately 1.8% of the people living in Malta are of other nationalities, this population consists mainly of British , Arabs, Italians , Indians , Syrians , Germans and Greeks. But over 400,000 Maltese also live abroad (mostly in Great Britain or Italy).

The Maltese language originated from a Maghreb dialect of Arabic . So it is a Semitic language . However, due to the waves of immigration already mentioned, it is interspersed with many foreign words, especially words from Italian . In Europe , Malta is a specialty, as most of the languages ​​in Europe are of Indo-European origin. So it is that the Catholic Maltese pray to Allah . Furthermore, almost every Maltese also speaks English , a legacy from the British colonial era , which only ended in 1964. It should be noted, however, that the Maltese can talk to each other in their own language, Maltese, and that they too have to learn English as a foreign language.

Like the inhabitants of the other Mediterranean countries, most Maltese have siesta in the afternoon due to the heat . This begins after lunch and lasts two to three hours. During this time, the majority of shops will be closed. After dinner, the locals usually take an evening stroll.

The attitude towards clothing is less liberal than in other European countries due to the strong Catholic character. Bathing or sunbathing without clothes is prohibited by law. As in most Catholic countries, wearing miniskirts , shorts, or off-the-shoulder clothing in churches is offensive.