Castelnou ( Catalan : Castellnou dels Aspres ) is a French commune of the department of Pyrénées-Orientales in the region Occitania . Administratively it is assigned to the canton of Les Aspres and the arrondissement of Céret .

The village is classified as one of the Plus beaux villages de France ( Most Beautiful Villages in France ).

The southern French village with 315 inhabitants (as of January 1, 2017) is not far from the Spanish border on the first foothills of the Aspres, 5 kilometers west-southwest of Thuir and 18 kilometers southwest of Perpignan . It is located on a steep slope of a hill dominated by a medieval castle with a watchtower . Developed traffic connection is the place by the department of road D48. 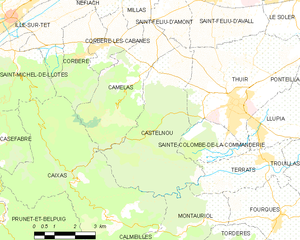 The castle was first mentioned in a document around 1065 as de Castro novo .

The place name is derived from the Catalan Castellnou ( Occitan Castelnau ), itself from the late Latin castellu novu and thus means "new castle".

The medieval city is first mentioned at the end of the 10th century and grew around the castle. It was the seat of the Viscounts (Vice Counts) of Castelnou. Inside the fortress there was also a chapel dedicated to Peter . The Chapelle Saint-Pierre served as a parish church until the end of the 12th century. From 1091 it was upgraded by the Augustinian canons . In the meantime, replaced by a new church, which was located outside the city walls, it had to give way in the 14th century when the castle hall was enlarged.

In 1268 Castelnou was besieged and finally captured by James II of Mallorca . In the early modern period , something similar happened in 1483, when the Lord of Castelnou had to capitulate to the approaching mercenary of the governor of Roussillon .

The castle was abandoned in the 17th century and the village gradually fell into disrepair until it was virtually deserted in the 19th century. But the castle was bought up at the end of the 19th century and subjected to a restoration, which should actually be described as a reconstruction. The boom in tourism after World War II later attracted new residents and guests, and a new village grew out of the ruins.

The coat of arms of the place corresponds to that of the Vice-Counts of Castelnou and is an expression of the military readiness: on a red background a silver castle, black brick, the castle gate transparent and open to the landscape.

The village of Castelnou as seen from the castle

The village center is grouped along two parallel streets at different levels. These are Carrer d'avall and Carrer del mig , which are connected by several stairs. The hemispherical ovens from the past, which adorn the facades of some houses, are remarkable. Some residential buildings have decorations made of ceramic tiles on the underside of the eaves (on the génoise ) . Quite a few houses also reveal astonishingly beautiful and well-formed bricks, which were probably removed from the fortress. Nevertheless, some parts of the bulwark are surprisingly well preserved. An example of this is the Porte de Millars gate in the north of the village, flanked by two towers .

The origin of the castle Château vicomtal goes back to the 10th century; without a doubt, the first fortifications were built at that time. It is noteworthy that a naturally existing rock wall was also integrated into the fortification walls that form the inner courtyard. During the entire 11th century, the Vice-Counts of Castelnou were the dominant lords in the region. In the 14th century the castle fell to the Kingdom of Mallorca . In the centuries that followed, it changed hands many times until it was finally abandoned. In the 18th century, when the fortifications fell into ruin, the last inhabitants of the village used their stones to build houses. After the integral restoration in the 19th century, it was modernized step by step by the new owner. But the facility was destroyed again in 1981 by fire. Renovated again, it was opened to the public in 1990.

The Église Sainte-Marie du Mercadal church , dedicated to the mother of Jesus and first mentioned in 1259, was built outside the city walls. It owes the second part of the name to the market that was established at this point. The church replaces the Saint-Pierre chapel in the courtyard. The sacristy and the bell tower are from the 18th century. The floor plan is kept simple: a nave , closed off by a semicircular apse . Most of the furnishings come from the Baroque era . The altarpiece of the high altar and the hinges of the door leaves from the Romantic era are remarkable .

A tower, which was an integral part of the fortress, stands on a neighboring rock in the north-west of the village and the castle. This cylindrical watchtower has been preserved in good condition; its shape is reminiscent of the Torre del Far in Tautavel or the Torre del Mir in Prats-de-Mollo-la-Preste .

The most beautiful villages in France in Occitania