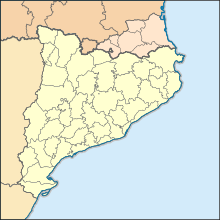 Location from Northern Catalonia to Catalonia

As North Catalonia ( Catalan Catalunya [del] Nord , French Catalogne du Nord ) is the northern part of the historic Principality of Catalonia called. Today it is on French territory and is almost congruent with the Pyrénées-Orientales department . The state border with the Spanish Autonomous Community of Catalonia essentially runs along the main ridge of the Pyrenees . Only the western area, now the French part of the Cerdanya , lies south of the watershed on the upper reaches of the Segre .

The name "Catalunya del Nord" was introduced by the "Northern Catalan " Alfons Mias from Amélie-les-Bains-Palalda at the beginning of the 1930s in order to give the Catalan language and cultural area north of the Pyrenees an all-Catalan identification. Until then, only the term Roussillon , the name of the historical province of the Ancien Régime, was in use on the French side . In addition to Catalogne Nord , Pays catalan , Catalogne française or Pyrénées catalanes are also used today. On the “southern Catalan” side, too, people mostly spoke of Rosselló (the largest comarca with the most important city), even if the whole of northern Catalonia was meant - unless the individual comarques were specifically named.

Today the term Northern Catalonia is used almost exclusively on the Spanish side of the Catalan language and cultural area and more and more frequently on the French side . In the first sentence of the preamble to the 2007 Charter for the Promotion of the Catalan Language of the Conseil Général des Départements, the region is referred to for the first time in an official French-language text and in Catalan as "Catalunya Nord". Even the Pyrénées-Orientales department is equated with northern Catalonia.

The Catalan identity in the south as in the north of the Pyrenees owes its continued existence to its constant adaptation to the respective political rule of the last centuries. In particular, the development of the autonomous region of Catalonia in Spain in the post-Franco period and the splendor of the capital Barcelona also strengthened Catalan self-confidence in the French part. You see yourself more and more as a member of a large community whose homeland is no longer limited to a strip of land in the extreme south of France.

Most municipalities now have two town signs of the same size on their main access roads, with the French, as before, on the right-hand side of the road, the Catalan equivalent (in Fenolheda the corresponding Occitan) on the left. Some television and radio programs from the south have also been broadcast digitally terrestrially in the north since 2010.

At the end of the 8th century, the Catalan counties were formed in the Franconian border marks along the eastern Pyrenees . They became part of the Spanish Mark against the Moors . The counties north of the mountain range, Cerdanya , Conflent and Rosselló fell in the following centuries - as well as those in the south - under the rule of the dominant county of Barcelona and shared with them the common history of Catalonia for eight centuries .

Perpignan: the Palace of the Kings of Mallorca ( Palau dels Reis de Mallorca ) from the 13th century

The community was interrupted between 1276 and 1344, when the northern Catalan counties became part of the Kingdom of Mallorca . James II of Mallorca , who was born in Montpellier , inherited the Balearic Islands , the counties of Cerdanya and Rosselló and the dominion of Montpellier as a sovereign kingdom from his father, James I of Aragón . The Palace of the Kings of Mallorca ( Palau dels Reis de Mallorca ) from the 13th century in Perpignan still bears witness to this today . With his inheritance, however, Jacob came into conflict with his older brother, King Peter III. of Aragón , who did not accept the division of his father's property. Jacob could not hold his own against his brother for long and had to give up his independence in Perpignan as early as 1279 . In 1283 Jacob allied with France against Peter. However, it failed in 1285 and had to accept the conquest of northern Catalonia and Mallorca by Peter. Jacob's son Sancho was only able to return to Mallorca in 1295 . But also his successor, Jakob III. from Mallorca , was confronted with claims from Aragon . In 1342 Peter IV of Aragón accused him of conspiracy with enemies of Aragon. Jacob was found guilty and his property was denied. In the same year Aragonese troops landed on Mallorca and defeated Jacob's troops, in 1344 the Rosselló and the Cerdanya also fell.

In the 17th century a separatist movement gained popularity in Rosselló and Cerdanya. The ambassador of Perpinyà sent a letter to the King of Spain, Philip IV, asking for independence from the Principality of Catalonia. He stated that the northern counties should be sovereign regions and administer their taxes. In 1627 the Principality of Catalonia rejected these separatist efforts, and no secession took place.

Division of Catalonia in the Peace of the Pyrenees

During the Franco-Spanish War (1635–1659), the leading Spanish minister Olivares pursued a policy aimed at greater centralization of Spain while restricting the traditional self-government rights of Catalonia. The high tax pressure and the economic crisis due to the many wars led to the open uprising of the Catalan provinces against the central government in Madrid in 1640. It came to the " revolt of the reapers ". The Spanish viceroy in Barcelona was killed and a meeting of estates declared the secession from Castile . She proclaimed Louis XIII. from France to sovereign in Catalonia. 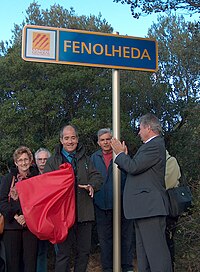 In the further course of the war the French remained victorious over the Spaniards and on November 7, 1659 the state of war between the two states was ended with the Peace of the Pyrenees . The Catalans were caught between two stools, and over their heads Spain ceded the two counties of Rosselló, north of the Pyrenees, and the northern Cerdanya to France. Catalonia was divided into two parts and the history of northern Catalonia flows into the history of France .

Northern Catalonia is almost congruent with the Pyrénées-Orientales department and includes the historical comarques Rosselló (capital Perpignan , Perpinyà ), Vallespir (capital Céret ), Conflent (capital Prades , Prada ), Capcir (capital Les Angles , els Angles ) and Alta Cerdanya ( Main town Mont-Louis , Montlluís ). In addition to these five Catalan-speaking comarques , the Occitan Fenouillèdes ( Fenolheda ) is often included because of the close geographical and administrative relationships (main town Saint-Paul-de-Fenouillet ). The external borders of this "northern Catalan" area do not exactly correspond to the administrative borders of today's department and the Comarques have no administrative function today, in contrast to Spanish Catalonia.

Nevertheless, from 2007 onwards, corresponding signs, analogous to the French department signs in blue with yellow letters, in Catalan (or in Occitan for Fenolheda, see photo on the left) were put up at the boundaries of the department and at the borders between the Comarques, without a French-speaking one Translation.