The title of this article is ambiguous. Further meanings are listed under Gaur (disambiguation) .

The Gaur ( Bos gaurus ) widespread in South and Southeast Asia is the largest living representative of the cattle . In the form of the gayal , it has been domesticated by humans .

The dewlap on the neck and the powerful muscle groups of the bulls are striking, which form a real muscle crest , especially in the shoulder area, and make the giant cattle appear even bigger. The short fur is brown, with gradations between reddish and blackish hues, but mostly dark brown or blackish. Old bulls are mostly largely hairless and almost black. The legs are colored white from the wrists and hocks to the hooves, which gives them a stocky appearance. The forehead and the crest between the horns is greyish-white. The horns themselves are on average 90 cm long and curved upwards in a crescent shape. They are yellowish-white and often have black tips. 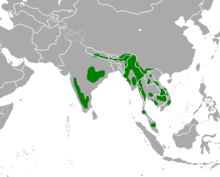 Today's distribution area of ​​the Gaur

The distribution area includes India , Nepal , Bangladesh , Myanmar , Thailand , Cambodia , southern Vietnam and the Malay Peninsula . Originally, most of the areas in these countries were inhabited by Gauren, but today you can only find individual fragmented populations that are mostly limited to national parks and protected areas. Gaure was recently discovered in the southernmost corner of the Chinese province of Yunnan .

Several subspecies have been described, but the only one that really differs significantly from the typical Indian gaur ( Bos gaurus gaurus ) is the Malayagaur or Seladang ( Bos gaurus hubbacki ), which is slightly smaller and has a weaker crest between the horns.

The gaur lives in dense forests. To feed, it occasionally comes to clearings or to the edges of the forest, but mostly avoids the open country. He always needs water to drink and bathe, but does not seem to wallow extensively, as water buffalo do. Gaure like to live in hilly terrain and climb up to 1800 m in areas. In the Himalayas they only inhabit the foothills and do not reach these altitudes. Gaure are by nature diurnal, but have often switched to a nocturnal way of life in the vicinity of human settlements. They are typical herbivorous all-rounders who use grass as well as leaves and herbs. If there is fresh, green grass, they prefer it to foliage and herbs. Their herds consist of about ten, exceptionally up to forty animals; these are cows with their calves, accompanied by a bull. The bulls often switch herds. There can only be one bull per herd; the right to lead a herd is fought in fights, which rarely lead to injury. Most of the time, the arguments are decided beforehand through gestures in which the bulls show each other their powerful shoulders from the side. Young bulls form their own associations, old bulls live as loners. Gaure breed in all seasons, but the mating seasons in central India are more frequent in the months between January and June. After 270 to 280 days, a calf is born that weighs around 23 kg and is suckled for 9 months. 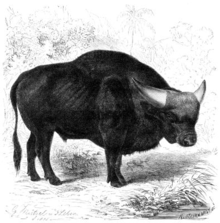 Gaur on a stamp of the Deutsche Bundespost Berlin from 1969

The IUCN classifies the Gaur as endangered. Due to human hunting and infection with cattle diseases, its population has shrunk considerably. Today there are still around 20,000 wild Gaure that live scattered over island-like areas. The population development is very different in the different countries of the distribution area: In India the populations have even increased since the 1990s, 90% of all wild Gaure live here today. You can meet them mainly in the national parks such as B. Bandhavgarh , Kanha , Kaziranga , Manas , Periyar and in the South Indian national park complex around Bandipur , Nagarhole and Mudumalai . Gaure can also be found in Nepal's Chitwan National Park . In all countries of Southeast Asia, however, the situation is dramatic: here all populations are threatened with extinction. There are probably only about 300 of these wild cattle left in Malaysia (source from 1989).

Gaure are among the five species of cattle that have been domesticated by humans. The domestic animal form is called Gayal, Forehead Cattle, or Mithun. The Gayal is significantly smaller than its wild ancestor and is considered tamer. He is used as a workhorse and meat producer. Gayale are only held in the border region of Myanmar, Assam , Manipur and Nagaland ; in the other parts of the distribution area the Gaur has never been domesticated, so it is only of local importance. Most of the time the Gayal herds live semi-wild in the jungle and only occasionally come to the villages. However, in some places Gayale have been crossed with domestic cattle ; these hybrids are also used in other parts of India and have typical pet characteristics.

The Gaur is often referred to as the Bos frontalis ; this was the original name for the Gayal, while the name Bos gaurus referred to the wild gaur. Today they are grouped into one species, according to the decision of the ICZN (Opinion 2027), gaurus is the valid name.

The names Gaur and Gayal come from Hindi . In addition, the Malay name Seladang is occasionally used, especially by travelers to Southeast Asia . In Burma it is called Pyaung, in Cambodia it is called Kiting , in Thailand Krathing ( Thai : กระทิง) and in Vietnam Kratie. The name of the energy drink Krating Daeng, which has been mainly distributed in Thailand since the early 1970s, is derived from the Thai name . In connection with safari tourism, it bears the somewhat misleading English name "Indian Bison".

Three VdZ -Zoos in Germany hold Gaurgruppen: the Berlin Zoo , the Zoo Dortmund and the Münster Zoo . Munich's Hellabrunn Zoo gave its last remaining Gaur cow to Dortmund Zoo in 2011 and has not kept any more Gaurs since then.