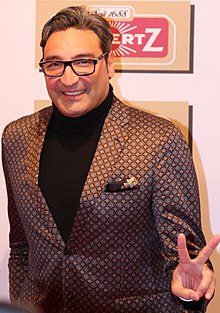 Mousse T. (* 2. October 1966 as Mustafa Gündoğdu in Hagen ) is a German - Turkish music producer . “Mousse T.” is the pronunciation of the nickname “Musti” (derived from Mustafa) in French (“Mousse”) or English (“T”).

The son of Turkish immigrants - his father was a gynecologist - discovered his talent on the keyboard while at school . In 1987 he passed the Abitur at the Kurt-Schwitters-Gymnasium in Hanover - Misburg . He played together with his current business partner Errol Rennals and his brother Delroy Rennals (later rapper with Mr. President ) in the local band Fresh & Fly. At the same time he ran a small studio with Ralf Droesemeyer (now Mo 'Horizons ) and toured the clubs as a DJ . Soon he was producing his own pieces and has been co-owner of the record label Peppermint Jam since 1993 . It is located in the Peppermint Pavilion , which Mousse T. acquired after Expo 2000 .

The style of his productions is mainly club-oriented pop music with strong elements of jazz and soul , which is also reflected in the selection of his singing partners (including Emma Lanford and Andrew Roachford ). Mousse T. initially made a name for himself as a remixer . Music greats like Michael Jackson ( Ghosts ), Quincy Jones , Gloria Estefan , Backstreet Boys , Simply Red ( Angel & Your Eyes ), No Angels ( Let's Go to Bed ), Fine Young Cannibals ( Johnny ) or Moloko ( Sing It Back ) left songs remix from him. Internationally, he is particularly successful in the USA with remixes for artists such as Timbaland and Missy Elliott . Mousse T. had his breakthrough in 1998 with his hit single Horny , with which he was internationally successful. With the single Sex Bomb , which he wrote exclusively for Tom Jones in 1999 , Mousse T. also made his international breakthrough as a songwriter and music producer .

From 2003 to 2005, an adaptation of Alice in Wonderland was played at the Hanover Theater , for which Mousse T. and Sven Kaiser wrote the music. In 2007 Mousse T. wrote the score for the Bernd Eichinger production Pornorama (director: Marc Rothemund ). The soundtrack CD was released under the pseudonym The Moussekateers. In 2007 Peppermint Jam founded a digital radio program based on the label Peppermint fm with the private radio broadcaster radio ffn in Lower Saxony . The program could be received via satellite until July 1, 2010, since then it has only been received via the Radio ffn website. Mousse T. regularly moderates a panel discussion with musicians, actors or politicians on topics related to culture and music for digital radio.

Mousse T's song Everybody was used as the title song of the 9th season of the RTL II television show Big Brother at the end of 2008 . On February 23, 2012, he took part in the memorial service for victims of right-wing extremism in the Konzerthaus on Berlin's Gendarmenmarkt and performed John Lennon's Imagine with the singer Sharon Phillips . In April 2012, he was the jury president in by Linda de Mol moderated Sat.1 - game show The Winner Is ... . In the 15th season (2018) of RTL telecast Germany Idol was Mousse T. part of the jury.

Mousse T. is separated from his wife, an American who lives with their son in Italy. He has been in a relationship with the presenter Khadra Sufi since 2018 .