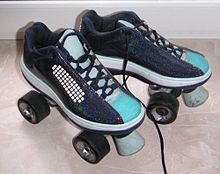 Another variant of the roller skate is inline skates . The common generic term for the sports practiced with it is roller sports .

In contrast to inline skates, the rollers on roller skates are arranged in two rows next to each other, and the distance between the individual rollers is greater than on inline skates. This arrangement reduces the risk of tipping over. Roller skates can be steered by an axle that is sprung with rubber.

With modern roller skates there are also different models that have been adapted to certain sports (e.g. roller skates for roller derby, art skating).

An uncertain tradition tells of roller skates used in a London theater performance in 1743. Details are not known. Around 1760, the musical instrument maker and violinist Jean-Joseph Merlin from Huy, Belgium, built a construction of three castors, which were mounted one behind the other under the shoe, which were known as skaites . The aim was to imitate ice skating on the parquet or stage. At a masked ball at the Carlisle House of Soho (London) , he played roller skate constantly fiddle and ran because he neither could drive curves in a mirrored wall still slow and seriously injured.

Around the middle of the 19th century, roller skating again gained a certain attraction as a stage spectacle. Thus came in the opera Le prophète by Giacomo Meyerbeer a skating scene, premiered in Paris in 1849, before that was performed on roller skates. How far the realization of the repeatedly rumored news of a roller skate construction by the inventor Philipp Reis (soon after 1858) had progressed needs to be proven more precisely.

Label of a package of children's roller skates from VEB Sportgeräte Schmalkalden with a unit sales price (EVP) 25.10 M

On January 6, 1863, the American James L. Plimpton received a US patent for the roller skate he had invented with four wheels. Further basics were required for a wider distribution. By 1870 Paris was almost completely paved , and the other major European cities followed. In 1883, the invention of the ball grinder made ball bearings affordable for everyday devices. These two prerequisites drove the development of a game and sports device that urban youths can use on the street.

Outside of competitive sports, iron rollers and clamping jaws with leather straps clamped to the soles of the shoes were among its standard features until the 1950s. In 1956 the market leader Hudora introduced rubber rollers, which were soon replaced by plastic. Later on, castors fixed to the boots became common and in 1980 roller boots , also called roller skates or disco rollers, with their colorful boots, soft, wider castors and steerable chassis became the trend. Another fashion change brought inline skaters onto the market around 1980 , in which the rollers are mounted one behind the other in a line. Another new variant are heel rollers, such as the Heelys and PLIWS brands .

After 2010 there will be roller derby , played almost exclusively by women in Europe.

On private property, for example on paths around apartment buildings, in a shopping center, in a shopping city, the host can issue rules. Driving with roller skates and inline skates is typically forbidden, but is sometimes tolerated if used responsibly and considerately, especially with a high level of driving experience. One argument is the fear of damage to the floor, especially through traces of paint from rubber abrasion. In the case of inline skates with nowadays often white PU wheels and without brake pads (typical for skates with wheels from 90 or 100 mm in diameter), this argument alone does not work. Roller derby groups fight against the fear of hall owners about damaging the floors of gyms and other desired locations.

Otherwise, the use of the general carriageway in the longitudinal direction is not permitted, but you can cross. Public transport passengers are forbidden to enter the vehicles "with roller skates or inline skates" - according to the Motor Vehicle Act (2001).