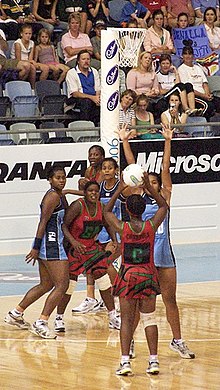 Game between Malawi and Fiji

Netball is a basketball-like team game played mainly by girls and women. Netball is mainly played in English-speaking countries, especially in Australia , Great Britain , New Zealand and South Africa . In Namibia it is since 2018 national sport . The sport is organized by the International Netball Federation .

Netball field with the three thirds

Netball is played on a hard court, which is usually covered with non-slip asphalt cement. The netball field is 30.5 m long and 15.25 m wide and is therefore slightly larger than a basketball field. The baskets are in the middle of the baseline. In netball, the playing field is divided into three thirds of 10.16 m each, the defensive third, the middle third and the attacking third. There is also a center circle and two opposing goal circles with a radius of 4.9 m in front of the basket on the netball field. At the edge of the sideline there is usually a table for the timekeeper and the scorer. The referee moves parallel to the sideline.

The netball is a hollow ball with a circumference of 690–710 mm and a weight of 400–450 g with a leather , rubber skin or a corresponding synthetic material. It is therefore much lighter and softer than a basketball. The basket is installed at a height of 3.05 m. In contrast to basketball, there is no board behind it from which the ball could bounce into the basket.

The style of play and the netball players

As with basketball, the aim of the game is to throw the netball into the basket. However, this is only allowed within the gate circle. A netball team consists of seven players, whereby each individual player is only allowed to move within certain thirds. The ball is passed on by passing it on and can only be moved towards the basket in this way. If a player has the ball, she may not dribble, but may take a step with the ball in her hands.

In netball, you can only defend indirectly by intercepting a pass. The defending players are only allowed to approach their opponent within three feet (≈90 cm). Due to this special way of playing netball, there are not only the usual forms of pass, such as the chest pass and the shoulder pass or an indirect pass (pass with ground contact), but also forms of pass such as the underhand pass.

The action radii of the 14 players: