The title of this article is ambiguous. Further meanings are listed under Peter Singer (disambiguation) . 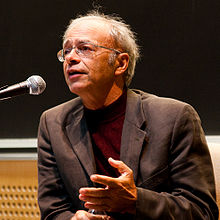 Peter Singer's parents were Viennese Jews who emigrated to Australia in 1938 after the “ Anschluss ”. He lost three of his grandparents in the Holocaust . Singer has taught at Oxford , New York University and La Trobe University and was Professor of Philosophy at Monash University in Melbourne , Australia from 1977 to 1999 . In 1999 he was appointed DeCamp Professor of Bioethics at the Center for Human Values at Princeton University .

Singer has been married to Renata Diamond since 1968. The couple has three daughters.

Singer has long been an advocate of preferential utilitarianism . In this variant of utilitarianism , the evaluation of actions or rules of action should be measured by the fulfillment of the preferences of all those affected, which must be offset against each other in order to reach an ethical judgment. In The Point of View of the Universe (2014) he examined the positions of Henry Sidgwick , which were oriented towards classical hedonistic utilitarianism, and ultimately defended them for the most part, and joined the hedonistic view of classical utilitarianism.

According to Singer, a justification for acting morally at all is not possible with rational arguments - disregarding individual preferences and the respective nature of the individuals. Singer is known for his elaboration of the ethics approach he represents and for its diverse applications, including in various questions of bioethics . With The Point of View of the Universe he took on a position of ethical objectivism, according to which ethical judgments can objectively be true or false.

Singer is also an advocate of effective altruism and the founder of the nonprofit 'The Life You Can Save'.

The liberation of the animals

→ Main article : Animal Liberation. The liberation of the animals

His book Animal Liberation , published in English in 1975, is considered to be an authoritative work in the contemporary discussion about the moral status of animals in the animal rights movement and ethical discussion. Together with Tom Regan , Singer is therefore considered to be the founder of modern animal ethics . In this book he describes the discrimination and exploitation of animal species based on the assumed primacy of the human species . Singer therefore speaks of " speciesism ". According to him, belonging to a species should not have any moral relevance for itself. The only criterion for ethical evaluations should and must be the ability to have certain preferences - and to this extent living beings, regardless of their species, should be included in the ethical calculation. For Singer, based on Jeremy Bentham, this already includes the ability to feel pain, with which the attribution of a preference for corresponding pain avoidance correlates. In mammals and birds in particular, there is sufficient evidence for the attribution of pain perception .

Among the consequences of this argument, the moral Recommendation is one of a boycott of products from almost all forms of animal husbandry , but especially the factory farming (for example, by vegetarianism or veganism ). Many animal experiments, according to Singer's results, have no rationally justifiable relationship to the suffering of the animals. Animal experiments are therefore largely morally wrong. However, there could be morally justified animal experiments, namely if more suffering is prevented as a result of these experiments (and thus more preferences for avoiding suffering are fulfilled) than is caused by the experiments themselves.

On the question of the cases in which the killing of animals is morally reprehensible, Singer hardly comments in Animal Liberation - The Liberation of Animals . He justifies this with the high complexity of this question and points out that the pain of animals in modern society alone requires a comprehensive change in behavior towards animals. The question of killing and the associated value of life is discussed in detail in his book Practical Ethics .

In his book Practical Ethics , published in 1979, Singer takes an even clearer stand and works out his form of preferential utilitarianism in general and applies it to various areas of applied ethics . In the general part of the book he takes a position on fundamental questions of normative ethics . Singer describes a principle of equal balancing of interests , which relates equality not to equal treatment , but to equal consideration of interests . There is no moral justification for disregarding interests. Also with the ability to feel pain and well-being, corresponding preferences (avoiding pain and achieving well-being) can be ascribed, which especially includes animals with such abilities in this utilitarian calculation.

Singer does not attach any moral relevance to the biological belonging of a being to the human species in itself. Only properties such as pain perception and self-confidence (which would be absent in some biological humans and on the other hand would be present in some non-human animals) are relevant. He describes a preference solely on the basis of a species affiliation as “speciesism”, which cannot be morally justified. As " persons " Singer understands beings who are aware of themselves in a temporal continuum. He ascribes a “special value” to these because of the further preferences that can be developed.

In this book, Singer also comments on abortions , the killing of newborns, and euthanasia . Further topics are global poverty, the asylum problem and topics of ecological ethics. In the third edition, Singer deleted the chapter on the asylum problem because, according to his own statements, he could not adequately address the issue to the extent required in a single chapter.

Singer's ethics are controversial and have provoked reactions outside of philosophical specialist publications. He has been criticized by theologians and representatives of the interests of people with disabilities (cf. Franz Christoph ). While in the Anglo-Saxon world his position was regarded as one legitimate among many, there were sharp reactions in Germany to the book Practical Ethics and to Singer's invitations to Germany. In special education journals in particular, there was fear of a “dam break of the actually indisputable” and the establishment of Singer's position as an acceptable point of view.

Singer himself attributes heated controversies to quotes taken out of context and a lack of overall understanding of his theses. In Writings on an Ethical Life , he therefore tried to summarize his views briefly. Quotations that did not come from Singer were also distributed. In addition, he attributes the attacks on his person and theses to the fact that certain normative requirements for his critics are not to be questioned, for example those that are nourished by religious convictions, for example when humans, but not animals, are assigned a soul. In the second edition of Practical Ethics , Singer describes the debate in the chapter How to be silenced in Germany from his point of view.

Organizations for the disabled are feared that (political) space and sometimes legal legitimation will be given to a mentality that could ultimately evoke attitudes towards people with disabilities, which in the past made possible the National Socialist euthanasia programs. Events at German universities that wanted to make Singer's theses the subject of philosophical discussion were therefore disrupted, prevented and the organizers threatened. Singer argues that parents, along with their doctors, should decide on the survival of an infant with an incurable disease such as anencephaly and whose life will therefore never experience the slightest satisfaction. He does not question the right to life of adult disabled people.

For some critics, the status of unarticulated interests or interests that can only be articulated later remains unclear. Singer himself agrees that interests should also be ascribed to a sleeping person and that these should be included in ethical considerations - since the person concerned would articulate them again after waking up. The latter would not be the case for comatose individuals; The attribution of interests to embryos also appears questionable, but on the other hand also the fact that, in principle, no rights can be attributed to embryos . Ethicists like Donald Bagley Marquis try, even in such cases - against Singer - to justify that interests should be ascribed and protected. Another problematic case is, for example, interests that cannot be articulated due to a lack of better insight or lack of freedom of the will, for example by drug addicts or in the case of temporary suicide wishes . Here, too, the persons concerned could be ascribed an interest worthy of protection, for example in the integrity of their own life.