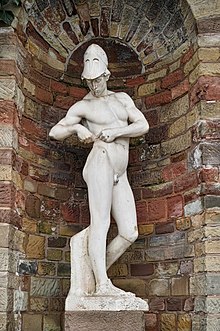 Telemachos ( Greek Τηλέμαχος "fighter in the distance"), also: Telemach , is the son of Odysseus and Penelope in the Greek myth .

Telemachus was a child when his father Odysseus left for the Trojan War . The story of his adolescence is told in the first four songs of the Odyssey. Accordingly, as a young man, he received advice from Athene , who stood by him in the form of Mentes during his youth, to inquire about his father with Nestor in Pylos and Menelaus in Sparta . In the latter place he learned that Odysseus could still be alive.

On the way back from Pylos to Ithaca, Telemachus, warned by Athena, escaped an assassination attempt by the suitors who were planning an ambush from the island of Asteris. When he returned home, he met Eumaios, the swineherd, his father, who had been transformed into a beggar by Athena. The latter revealed himself to him, and Telemachus then assisted him in killing Penelope's suitors.

Telemachos' later story is told in different ways : After Telegonia , after the death of Odysseus, he and Penelope are taken to Aiaia by his half-brother Telegonos , where Kirke takes him as a husband and Telegonos marries Penelope. Kirke gives Telemachus and Penelope immortality. According to another saga tradition that z. B. Hellanikos reproduced, Telemachus travels to the Phaiacs , where he falls in love with Nausicaa and marries her. The two testify to the Ptoliporthos , according to other sources Persepolis (also Perseptolis). According to Hesiod , however, Persepolis was the result of a marriage between Telemachus and Nestor's daughter, Polycaste .

Telemachos as an object of music, theater, painting and literature