Location of the Coral Sea 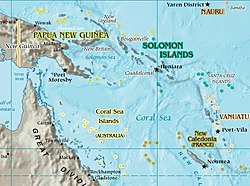 The Coral Sea , part of the South Pacific
northeast of Australia

The Coral Sea or the Coral Sea ( English Coral Sea , French Mer de Corail ) is a tributary of the Pacific Ocean between Australia , New Guinea , the Solomon Islands and Vanuatu .

The Belep and Chesterfield Islands , which belong to New Caledonia (and according to the definition of the International Hydrographic Organization (IHO) also the main island Grande Terre , the Loyalty Islands and the Île des Pins ) lie within the more than 4,791,000 km² of the Coral Sea , as well as off the Australian coast (outside the Great Barrier Reef) the Coral Sea Islands , an Australian outer area since 1969 . Except for a manned weather station on Willis Islet , these islands are uninhabited; They also include the Lihou Reef , which is one of the largest atolls on earth with a lagoon of around 2500 km². Between the Great Barrier Reef and the Australian coast, in the coastal waters of Queensland , lie the Cumberland Islands with the touristic Whitsunday Islands . The Louisiade Archipelago , which belongs to Papua New Guinea , forms the border to the Solomon Sea , but lies mostly north of the border line defined by the IHO. In contrast, the Vanuatus Islands - the New Hebrides , Banks and Torres Islands  - are located in the Coral Sea according to IHO's definition and form its eastern border with their east coast.

According to IHO, the border to the Tasman Sea runs along the 30th parallel south from mainland Australia to Elizabeth Reef. In practice, however, the boundary between the coastal waters of Queensland and New South Wales (about one degree further north) is also considered to be the boundary between the two seas, so that, depending on the definition, the Elizabeth and Middleton Reefs lie on the edge of the Coral Sea or in the Tasman Sea .

In 1942 a sea ​​battle between Japanese and Allied naval units took place in the Coral Sea , the result of which led to the termination of the Japanese invasion of Port Moresby .