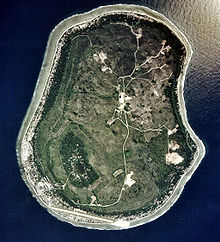 An upscale atoll has all the characteristics of a typical atoll , for example a reef belt and the remains of a central lagoon , which, however, are well above today's sea level. Upscale atolls are initially “ordinary” atolls that are raised above the sea surface after the reef has formed. The cause of this uplift is the resurgence of tectonic or volcanic activities. As a rule, the central lagoon of the atoll dries up, silts up and plants settle in over time. A coral reef was subsequently able to form again at sea level on some islands. Upscale atolls often have abundant phosphate deposits that go back to the deposition of guano by seabirds.

The French term for an upscale atoll is makatea , in the Anglo-American language area it is referred to as raised reef island or makatea island . Makatea is an old Polynesian word that means "white stone" ( limestone ). The name also refers to an island in the Tuamotu Archipelago , an upscale atoll.

“We noticed huge coral rocks protruding fifteen feet from the water. The coral animals cannot get over the water. So how they were lifted, whether by an earthquake or in some other way, I cannot decide. "

As far as we know today, possible mechanisms for atoll uplift are:

The cause of the uplift is controversial in some cases, for example in the case of the upscale atolls of the Cook Archipelago .

Atolls are formed in tropical waters by the growth of a coral reef around the surface of a submarine volcano. After the end of volcanic activity, the volcanic mountain slowly sinks due to the lack of penetrating magma and due to its own weight, but also due to the sinking of the oceanic crust due to the plate tectonic drift. At the same time, it is being removed by erosion until only the reef rim, which is constantly growing up, is visible above the water surface. In some cases, however, volcanic activity resumes and penetrating igneous masses uplift the atoll.

Elevation caused by so-called lithospheric flexure is also related to volcanic processes . Here the oceanic crust, which is thin compared to the continental crust, reacts in two ways when it is burdened by a newly formed volcanic complex: a depression in the immediate vicinity of the volcano and - as compensation - a bulge some distance away. Hawaii is a good example of this process . It can happen that existing coral atolls in this radius are lifted above the sea surface. Such processes can be observed especially in relatively young volcanoes that are younger than 2 million years. An example: The mass of the volcano that formed the island of Pitcairn 900,000 years ago caused the uplift of the island of Henderson, 200 km northeast . This process is also assumed for the islands of 'Ātiu, Ma'uke and Miti'āro in the Cook Archipelago.

Another process that could lead to the uplift of large areas of oceanic crust is the large-scale rise of magma in a plume or mantle diapir . The uplift of the Cook, Marquesas, Pitcairn and Society Islands is said to go back to the so-called “South Pacific Superswell” (roughly: “South Pacific Large Vault”).

The position of some uplifted atolls on the edges of tectonic plates and near subduction zones indicates that their ascent through large-scale uplift processes is related to plate tectonic activity.