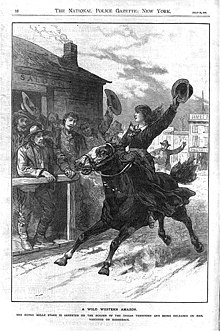 Belle Starr (actually: Myra Maybelle Shirley ; born February 5, 1848 in Carthage, Missouri ; † February 3, 1889 ) is one of the most famous robber brides in the Wild West . She and three of her husbands, one of her lovers, and herself died violently. The adventurous life story of the American bandit queen was - not always truthfully - portrayed in books and films. Information about their husbands, lovers and their involvement in criminal activities often differ.

Myra Maybelle Shirley was born on February 5, 1848, to businessman John Shirley and his third wife, Eliza, near Carthage in Jasper County , Missouri . Her father was considered the "black sheep" of a well-off Virginia family . He owned a hotel, an inn, a stable and a farrier.

After the outbreak of the American Civil War (1861-1865), the Shirley family took the side of the southern states . Belle's brother "Bud" joined the guerrilla gang "Quantrill's Raiders" by William Clark Quantrill (1837-1865), who fought for the southern states, and died in June 1864 at the age of just 22.

Soon after "Bud" 's death, John Shirley, whose businesses had suffered from the Civil War, sold his property and moved his family to the Sycene area near Dallas , Texas , where he started a life as a farmer. At first the Shirleys lived in a primitive dugout, but later in a clapboard house with four rooms, which was considered a luxury in Texas at the time. Belle was attending school at the time, and was older and more educated than her classmates.

One day a gang of outlaws, one of which was the bandit Jim Reed (1845–1874), sought refuge on the Shirley's farm. Soon a romance developed between Belle and Jim. On November 1, 1866, 18-year-old Belle Shirley and Jim Reed were married in Collin County , Texas. The couple initially lived on the Shirley Farm near Sycene and from 1867 on the Reed Farm in Missouri . Jim was more interested in horse racing than agriculture and spent little time at home.

In September 1868, Belle gave birth to their first child, a daughter she named Pearl, who later became known as Pearl Starr .

Jim Reed made the acquaintance of the Cherokee Indian and multiple killer Tom Starr, who illegally smuggled weapons and whiskey into the reservations . Reed also got into these crooked businesses. After avenging the death of his older brother Tom and shooting a man named Shannon, Reed was wanted for murder and alcohol smuggling . Because of this, Jim and his family fled to California in 1869 .

Belle gave birth to their son James Edwin, called Eddie, in Los Angeles on February 22, 1871 . In March of that year, Reed was charged with disseminating counterfeit money . In the subsequent investigation, the aforementioned murder charge came to light again. Reed fled headlong to Texas with his horse, had his family follow him by carriage and was soon living on a farm again.

In the spring of 1871, Cole Younger , the second eldest son and seventh of fourteen children of a horse dealer, was staying with the young Reed family and doing business with Reed. According to some authors, Younger is said to have been the father of one of Belle's children. In 1873 Reed and his gang had to flee to Indian territory because of two cold-blooded murders . When her husband cheated on her with another woman, Belle moved in with her parents.

Reed was involved in the raid on the stagecoach of the San Antonio to Austin line on April 7, 1874 . It was one of the first stagecoach robberies in Texas. A few months after the fact, in August 1874, Reed was shot dead by one of his acquaintances near Paris in Texas because of the bounty on him . In 1876, Belle also lost her father and her home because her mother sold the farm. After that, Belle moved in with her mother-in-law. In 1880, Belle lived for a few months with Bruce Younger (1853-1888), a cousin of Cole Younger.

On June 5, 1880, Belle married the 28-year-old Cherokee and bandit Sam Starr (1852-1886). Marrying him gave her the name under which she became famous: Belle Starr. The Starr couple settled in Indian territory on the Canadian River near what is now Eufaula in Oklahoma . The two lived in a remote, inaccessible cabin called “Younger's Bend”. Sam Starr had chosen the name for the dwelling in memory of the James Younger gang . Soon “Younger's Bend” developed into a popular hideaway for fugitive bandits. The notorious Jesse James (1847-1882) stayed there for seven months.

In 1882 Sam and Belle Starr were arrested for horse theft and sentenced to one year in prison in Fort Smith by federal judge Isaac Charles Parker , (1838-1896). Both served nine months of their sentences in Detroit Prison in 1882/1883. After that, Belle gradually lost interest in Sam.

In 1884, 36-year-old Belle Starr took the 23-year-old bandit Bluford Duck as a lover. When he was put behind bars in 1886, the wanted murderer John Middleton Belles became a new companion. A little later, Middleton was found shot dead. On December 17, 1886, Sam Starr, to whom Belle was officially still married, and his old enemy Frank West were killed in a duel in a saloon - the two shot each other.

Shortly after Sam Starr's death, the now 40-year-old Belle married the 26-year-old Cherokee Indian and bandit Jim July Starr (1862–1890), an adopted son of Tom Starr. The family fell apart because Belle's son Eddie also got on the wrong track and her daughter Pearl worked as a prostitute after an unwanted pregnancy .

Two days before her 41st birthday, on February 3, 1889, while riding from Fort Smith to her lair “Younger's Bend”, Belle Starr was shot off his horse by an unknown person with two shots from a shotgun. She succumbed to her serious injuries at the scene of the crime. Their killer was never caught. Belle Starr found her final resting place on February 6, 1889 near her hut on Indian territory. Her grave is on the edge of Eufaula Lake.

An episode of the TV series 'Stories of the Century' was about Belle Starr, played by Marie Windsor . In Germany, the 1954 episode entitled 'Beauty does not protect against punishment' of the series 'Railway Detective Matt Clark' was broadcast on ZDF in 1968.

Also in the series Dr. Quinn - a passionate doctor , the life of Belle Starr is thematized: In season 3, episode 21 ( Escape from the Law ), she goes on a raid through Colorado Springs with Jim and Cole Younger.