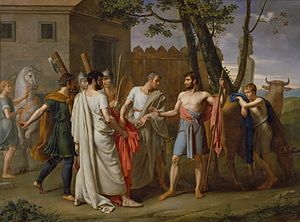 Cincinnatus leaves the plow for dictatorship over the Romans  - Juan Antonio Ribera , c. 1806

The historical course of Cincinnatus' life cannot be determined with certainty, since what is passed down about him is difficult to distinguish from legends . It is said that he led a secluded life as a farmer .

The reason for this seclusion was as follows: Cincinnatus' son Kaeso Quinctius was falsely accused of murder but was allowed to go free on bail. After Kaeso had fled to Etruria and was sentenced to death in absentia, Cincinnatus had to pay a large sum as a fine and was then forced to farm his fields while living in simple circumstances.

As Livius reports, he began his first term as dictator when Rome was threatened in its existence by the tribes of the Aequer , Sabine and Volscians . It was the Senate itself that asked him to assume the post of sole ruler in order to save the city. In his absence, his field would remain uncultivated, which would have life-threatening consequences for his family. Nevertheless, he is said not to have hesitated to fulfill his duty to the state. Within 16 days he is said to have defeated the peoples who were hostile to Rome. The citizens' fear that he might hold onto power after the war was unfounded: he immediately gave power back to the elected representatives and continued to work in his fields. Nor did he demand any payment for his services. This made him a symbol of the good leader.

To suppress a plebeian revolt , Cincinnatus, who was a stubborn opponent of the plebeians, was appointed in 439 BC. Used again as dictator. Here, too, he stayed in office no longer than necessary and returned to field work. Less than a decade later, Cincinnatus died of old age. For many Romans, especially Cato the Elder , he was considered a prime example of republican virtues.

Cincinnatus was considered by the Romans, especially the noble patricians, as a hero of ancient Rome and a symbol of simplicity and virtue. George Washington also took it as a model and officers of the American Revolutionary War founded the Society of the Cincinnati shortly before the end of the war in order to preserve the ideals of the independence movement . The city of Cincinnati , Ohio, is named after the brotherhood . After Cincinnatus also is Cincinnato in Italy named.