Harriet Beecher Stowe (born Harriet Elizabeth Beecher ; born June 14, 1811 in Litchfield , Connecticut , † July 1, 1896 in Hartford , Connecticut) was an American writer and declared opponent of slavery . Her book Onkel Toms Hütte from 1852, a novel against slavery, and the play of the same name reached an audience of millions.

Stowe was born to Presbyterian theologian Lyman Beecher , the youngest daughter and the seventh of 13 children . Her mother Roxana died when the girl was five years old. One of her brothers was the liberal preacher Henry Ward Beecher , and one of her sisters was the writer Catherine Esther Beecher .

She completed a classically male education and entered the girls' school founded by her sister Catherine in Boston at an early age . At the age of 21, she moved to Cincinnati with her father in 1832 and joined the Semi-Colon Club, a club for talented writers. At the club she met the theologian Calvin Ellis Stowe , widower and professor, whom she married on January 6, 1836. Calvin, himself an opponent of slavery, fathered seven children with Beecher, including twin sisters. In 1850 he was called to the theological seminary in Andover , Massachusetts .

In leisure hours, Harriet Beecher Stowe occupied herself with fiction works and in 1843 published her first book containing short sketches and stories under the title The Mayflower (new edition 1868).

She had already dealt with the slave question at her previous residence; She made even more in-depth studies and observations when she and her husband repeatedly toured the south and saw the plantations of Louisiana , Tennessee , Georgia , North and South Carolina , the slave farms of Virginia , the "Negro markets" of New Orleans, and more. When the Fugitive Slave Law was passed in Congress in 1850 , Beecher Stowe felt the time had come to write about the hard lot of slaves. 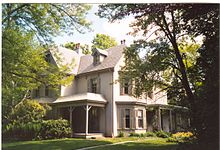 Received at the new place of residence and to travel impressions they processed in her famous, the plight of the enslaved black Africans in the North American slave states performing novel Uncle Tom's Cabin ( German  Uncle Tom's Cabin ). The text appeared from June 1851 to April 1852 in sequels in the abolitionist newspaper National Era and in 1852 as a book in Boston.

The novel influenced the political opinion in the United States on this issue much and became an important pamphlet in the civil war of the Northern states against the southern states ( American Civil War ). 300,000 copies were sold in the first year of publication; numerous new editions and translations into other languages ​​followed. Abraham Lincoln is said to have said when meeting Harriet Beecher Stowe: "So you are the little woman whose book caused this great war."

The book was dramatized on the London Volksbühnen and Beecher Stowe himself edited the material as a drama under the title The Christian Slave . Edits were extremely successful in various versions for several decades. It is estimated that around one hundred ensembles were on tour with the piece in the 1890s alone.

In order to weaken the great impression of Uncle Tom's Cabin , which the work made on promoting ideas of emancipation, Mary Eastman , who had provided skilful pictures of Indian life up until then, appeared with the counter-novel Aunt Phillis's Cabin , which, however, remained as good as ineffective .

On the other hand, Beecher Stowe published a key to Uncle Tom's Cabin in 1853 , in which she tried to historically prove the facts told in her novel. The autobiography of Josiah Henson, the role model of Uncle Tom , was published in Boston in 1879. The author toured Europe in 1853 and was showered with honors everywhere. The work Sunny Memories of Foreign Lands (Boston 1854, 2 volumes) appeared as the fruit of this journey . 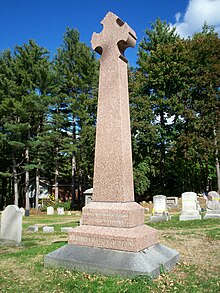 In the following years she was also very productive literarily and published a large number of works. Among them was a second novel against slavery in 1856, Dred, A Tale of the Great Dismal Swamp , the title character of which is one of the Great Dismal Swamp Maroons . As indicated in these rudiments, Beecher Stowe is among other things part of the regional literature of New England . Her poems, which fill several volumes, are mostly of a religious nature.

She lost much of her fame through the book True Story of Lady Byron's Life (1869), in which she accused the poet George Gordon Byron (Lord Byron) of being incestuous with Augusta Leigh , his half-sister, and caused a storm of indignation which she tried in vain to appease with the brochure Lady Byron Vindicated (1870).

Together with her other siblings, especially the influential Henry Ward Beecher, she tried unsuccessfully in 1871 to dissuade her sister Isabella Beecher Hooker from supporting Victoria Woodhull in her candidacy for the 1872 presidential election. In her novel My Wife and I , published in 1871, Woodhull was the model for the obnoxious character of Audacia Dangereyes, who also aspired to the presidency and used methods as immoral as men. In the 1870s, Henry Ward Beecher was charged with adultery. The process turned into a national scandal. Harriet Beecher Stowe couldn't stand the allegations about her brother and fled to Florida. Even so, she remained loyal to her brother and believed in his innocence.

In 1880 she took a stand against the polygamy practiced by the Mormons at the time :

“Every happy wife and mother reading these lines should contribute their compassion, prayers, and efforts to free their sisters from this degrading bondage. All women in the land should stand up for them, united. In a united enlightened attitude lies a power before which any form of injustice and cruelty must ultimately perish. "

Harriet Beecher Stowe died in 1896 at the age of 85 and was buried on the Phillips Academy campus in Andover, Massachusetts.