The lima bean ( Phaseolus lunatus ), also moon bean called, is a plant of the genus Phaseolus in the subfamily of Schmetterlingsblütler (Faboideae). This crop is closely related to a number of other crops called " beans ". There is a large and a small-seeded subspecies, which are sometimes differentiated as Lima bean (large) and moon bean (small).

It needs sufficient heat and can therefore only be cultivated economically to a limited extent in Central Europe.

The Lima bean is an annual, bushy or trailing herbaceous plant with a stem that can reach lengths of 2 to 4 meters. The petals are usually light green, sometimes purple. 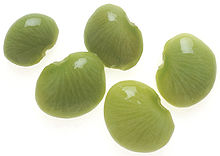