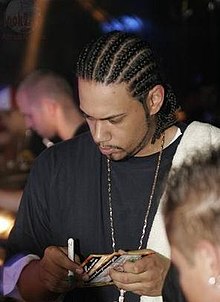 After the Hamburg label Eimsbush had to file for bankruptcy in 2003 , Dynamite Deluxe member Samy Deluxe founded a new record label that same year. It was then a sub-label of Capitol Records, which belongs to the EMI Group. With Deluxe Records, Samy Deluxe fulfilled their dream of having their own label. The label's first artists were Samy Deluxe himself, the rap crew Headliners and the rapper Illo . To make them known, Samy Deluxe founded Hamburgs Finest , a subdivision of Deluxe Records for the marketing of mixtapes and fan articles, initially only on the Internet, but since Mixtape Vol. 4 also in retail. In addition, the compilation album Deluxe Records - Let's Go! on the market, with which Samy Deluxe presented its crew to an even larger audience in combination with the Let's Go tour .

The Internet show Deluxe Zoom premiered on February 12, 2007 . Live performances and backstage videos by the label's artists were shown there. The episodes appeared at irregular intervals. Meanwhile, Deluxe Zoom no longer produced.

In July 2007 Deluxe Records separated from Capitol Records / EMI Group and has since worked as an independent label with distribution via Groove Attack . Only the albums by Samy Deluxe continued to be released via Capital Records / EMI Group. In December 2007, TUA, which previously belonged to the squad of the Royal Bunker label , moved to Deluxe Records. In March 2008, Snaga & Pillath separated from Deluxe Records due to business differences. Also Manuellsen soon left the label. In the course of 2008 Illo ended his rap career and Blade left the label. So at the end only Ali As and Tua were under contract next to label owner Samy Deluxe . In December 2008 the three rappers released the second label sampler called Liebling, I have shrunk the label . In 2009 the solo albums by Tua and Samy Deluxe were released. Samy Deluxe closed Deluxe Records in late 2009 after his mixtape The Last Dance for economic reasons.

Press photo with Samy Deluxe, Ali A $ and Tua 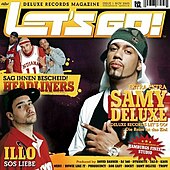