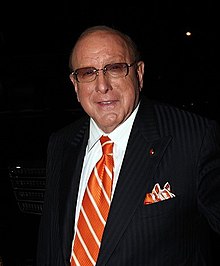 Clive Jay Davis (born April 4, 1932 in Brooklyn / New York City ) is the founder of Arista Records and current CEO of J Records . He has been a member of the Rock and Roll Hall of Fame in the Non-Performer category since 2000 . Davis is responsible for over 300 # 1 titles. He is the discoverer of numerous musicians, including Pink Floyd , Bruce Springsteen , Whitney Houston , Patti Smith , Alicia Keys , Janis Joplin and Aerosmith .

Davis was born in Brooklyn, New York, to his Jewish parents, Herman and Florence Davis. He graduated from New York University and Harvard Law School . He was then hired by Columbia Records . In 1967 he became the company's president. He discovered Janis Joplin in 1967 at the Monterey Pop Festival , where he brought her to Columbia Records together with Laura Nyro and The Electric Flag . These were his first record deals , followed in the same year by contracts with Blood, Sweat & Tears and The Chambers Brothers .

After bringing Santana to Columbia the following year and Billy Joel and Aerosmith in 1973, he was fired in 1973. He founded Arista Records in 1974 . Patti Smith was under contract there from 1975 , as was the Grateful Dead (since 1977).

He signed Whitney Houston in 1983 and served as executive producer on her 1985 debut album . The album has long been the most successful debut album by an artist in the USA.

In 1989 the two music producers L.A. Reid and Babyface signed a contract with Davis that led to the establishment of Arista's partner LaFace Records . In the same year Sarah McLachlan's debut album was released on Arista.

Sean Combs ' label Bad Boy Entertainment also partnered with Arista in 1994. In 1999 Davis worked with Prince and released the album Rave Un2 the Joy Fantastic on Arista . However, the cooperation between the two was not harmonious.