The Padjelanta National Park is located in the far north of Sweden on the Norwegian border, far from all roads. Padjelanta ("Badjelánnda" in the Lule Sami language means "the higher land"). With its 1984 km² it is the largest national park in Sweden and one of the largest in Europe. It was established in 1962 and has been part of the Laponia UNESCO World Heritage Site since 1996 . In the west it borders on Norway , where the Norwegian Rago National Park joins. For the most part, Padjelanta consists of an extensive, mountainous plateau averaging 800-1000  m above sea level. The two large lakes Vastenjaure and Virihaure are located within the national park. In the east, the Sarek and Stora Sjöfallet national parks border .

There are no permanent settlements in the national park. However, the area is used as the primary summer grazing area by the Sámi reindeer herding communities Tuorpon, Jåhkågasska and Sirgas, which can be found here during the summer months. a. inhabit the two villages of Staloluokta and Arasluokta. Here are some of the traditional Sami peat and tent coals .

The flora of the park is mainly part of the habitat of the low mountain tundra (Swedish: Lågfjäll) with alpine meadows and arctic dwarf shrub heaths . It includes many species that are unique to Sweden, such as the lower sandwort (Arenaria humifusa), the shaggy cinquefoil (Potentilla crantzii) and some endemic sedge species.

Notable animals in the park include a. Golden eagle , snowy owl , lemming , wolverine and arctic fox . The last two species mentioned have the main focus of their total population in Sweden in the Padjelanta National Park.

The Padjelantaleden hiking trail leads into the park from Ritsem in the north and Kvikkjokk in the south . Ritsem is accessible from Gällivare and Kvikkjokk from Jokkmokk by road by bus or car. You can also hike from Sulitjelma from Norway via the Sorjus Hut of the Norwegian Mountain Hiking Association DNT (locked, keys to borrow in Sulitjelma) to the east into the Padjelanta. In summer there are also regular flight connections by helicopter between Ritsem or Kvikkjokk and Staloluokta.

The Padjelantaleden , a 140 km long hiking trail, runs through the park , along the course of which there are some overnight huts, which are open during the summer months and are partly managed. The seeds from Staloluokta and Arasluokta offer various attractions for tourists. You can watch the calves being marked or get an insight into the traditional life of reindeer herders in various ways. 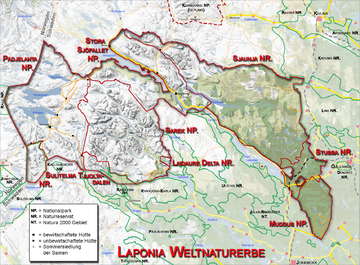