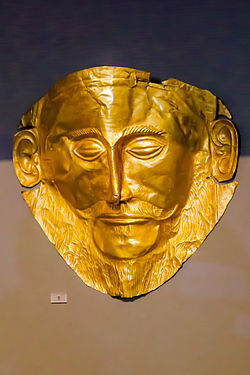 Mask of Agamemnon in the Athens National Museum

The gold mask of Agamemnon was discovered in 1876 by the German archaeologist Heinrich Schliemann during excavations in Mycenae , Greece . According to Schliemann, it should represent the legendary King Agamemnon , a hero of the Trojan War .

During excavations near the “Lion Gate” of Mycenae, Schliemann came across a grave within cave A that contained three unusually large skeletons , one of which had apparently been robbed. The other two wore gold masks and also a gold breastplate. Due to the special gold mask and the size of the skeleton, which was the southernmost part of the grave, and the other rich furnishings, Schliemann assumed that it must be Agamemnon. However, this view was not shared by other scholars. Professor Ernst Curtius , who excavated the historic Olympia , visited the find. In his opinion, the gold of the mask was far too thin to endow such a powerful ruler with it. He concluded that the skeletons must have come from the Byzantine era .

Schliemann replied that all the gold finds in the graves were much too thin to be carried by living rulers or warriors. The pieces of jewelry were specially made for the funeral. Another critic, the captain and private scholar Ernst Bötticher, even claimed that Schliemann had the jewelry made himself in order to secretly bury it. Because of his avarice, he no longer wanted to use gold. It was also pointed out that the mask had some resemblance to Schliemann. However, this must be seen as a mere polemic .

According to today's knowledge, the grave and the finds it contains are dated to the middle of the 16th century BC. And can therefore hardly be assigned to the Atrids and King Agamemnon. It is generally assumed that the legends about the Trojan War and thus also the mythical figure of Agamemnon were made much later than the 16th century BC. Reflect. Therefore it is assumed today that the mask belonged to the grave of a Mycenaean prince of a previous dynasty.

The mask is made of yellow-reddish, strong gold sheet and has a height of about 26 cm and a width of 26.5 cm. The face of a man with a beard, mustache and eyebrows is carved into the tin. Next to the earlobes there is a hole that was probably used for attachment.