Christinehamn towards the end of the 17th century

The core of the city was the port and the market square. The city was founded in 1582 under the name Bro and finally received city rights when it was renamed Kristinehamn in 1642.

The city's history is strongly linked to a Dutch type of ship, the Boeier , from the 16th century. These ships were used to bring the raw metals from the Bergslagen region to Kristinehamn. For this reason, a Boeier is also shown in the city arms.

Since none of the historical ships was preserved, it was decided in 1997 to build a replica. After the maiden voyage on June 18, 2005, the Christine af Bro became an attraction for local and foreign tourists. The ship mainly makes tours on Lake Vänern, but larger companies can also book it for longer trips.

In the 1960s and 1970s sailing yachts of the types Albin Accent and Albin Vega were built in the Albin Marin AB shipyard.

The main routes are the European route 18 , which runs from Stockholm to Oslo , and the Riksväg 26.

The city has a train station on Värmlandsbana Laxå - Eda . The inland railway has its starting point here, but today large parts from Nykroppa to Mora are closed. 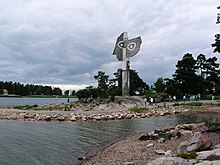 Picasso statue on the banks of the Vänern

Kristinehamn has a larger exhibition of Pablo Picasso's sculptures . The most famous of these is the monumental sculpture on the Strandudden headland . It is 15 m high and was built in 1965. Picasso drew the first sketches for it in the 1950s. The first plan was to erect the statue in the Norwegian hometown of the artist Carl Nesjar , who had worked with Picasso for around 17 years. The municipal decision-makers, however, were not pleased with the designs.

In France, Carl Nesjar later met the Swedish painter Bengt Olson from Kristinehamn. When the artists were talking about the "statue without a home", Olson suggested trying it in Kristinehamn. Picasso also agreed on the condition that Nesjar erect the statue and that the chosen location proved to be suitable. Kristinehamn Municipality was not only willing to accept the statue, they also paid for it to be erected.

Places in the municipality of Kristinehamn