Ellen Marsvin as a young woman

Ellen Marsvin (* 1. February 1572 on Landskrona Slot ( Landskrona ); † 11. November 1649 at Schloss Ellensborg (now Holckenhavn ) at Nyborg ) was a Danish nobleman who because of their wealth and influence than in-law at the court of Christian IV. Won .

Ellen Marsvin was one of ten children of the Imperial Council Jørgen Marsvin (ca. 1527-81) and his wife Karen Gyldenstierne (ca. 1542-1589). Her father came from the Danish aristocratic family Marsvin, whose heraldic animal is the porpoise (Danish: Marsvin). As a young man he served at the Danish royal court. He appears in the sources in 1548 under the entourage of Princess Anna to her wedding in Saxony and in 1551 as courtier of the deposed King Christian II. In the three-crown war he proved himself and in 1564 received the liege of the strategically important Helsingborg Castle . In 1567/68 he supported Daniel Rantzau's winter campaign and in the same year became a feudal lord of Landkrona. In 1570 he was admitted to the Imperial Council and in 1576 he was enfeoffed with Odensegård on Fyn , where he had the Hollufgård manor built near Odense in 1577 .

The coat of arms of the Marsvin family

Nothing is known about Ellen Marsvin's youth. As a 17-year-old orphan, she married the 52-year-old liege of Trøndelag Ludvig Munk , who had previously been governor of all of Norway . He also owned several estates on Funen and in Himmerland (North Jutland). With him she had the daughter Kirsten Munk . After his death on April 8, 1602, she married Knud Rud (born March 11, 1556) in 1607, who was a successor to her father as a feudal man on Odensegård. He owned the Sandholt estate on Fyn. He died on July 22nd, 1611. With her strong business acumen, which she had inherited from her father and husbands, she increased her inherited wealth and became the richest landowner in Denmark. In 1625 she owned 7600 hectares on Fyn alone. 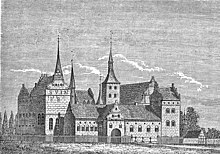 Ellensborg Castle, today's Holckenhavn, on Funen on a contemporary depiction - the name MARSVIN is still clearly visible on the left tower

In 1615 the widowed king became aware of her 17-year-old daughter Kirsten. As a member of the lower nobility, Kirsten Munk was not an equal marriage with the king, but Ellen Marsvin prevented her daughter from becoming just another mistress of Christian IV. She negotiated a marriage contract that made Kirsten the wife of the king with secure income and entitlements. The superstitious king also had his court astrologer calculate the date for the letter in which he declared Kirsten his wife. She herself benefited from the close relationship with the court both economically and as an advisor to the king. She bought up the property of indebted nobles and among other things the agricultural goods Boller near Vejle and Rosenvold near Randers , with whose products the Danish fleet was equipped. She built several mansions, such as Ellensborg Castle, which she bought from Chancellor Jacob Ulfeldt in 1616 , expanded it extensively and furnished it exquisitely. Also Tåsinge , where the Christian IV. Valdemar for his son Waldemar Christian was built, they had sold him. She was also active in the area of ​​the church and in 1616 gave her house chaplain and Kirsten's tutor Hans Mikkelsen the diocese of Funen . In 1620 she even became administrator of Dalum monastery near Odense , a fief that normally belonged to the chancellor. She lived there for most of the time before losing the fiefdom in 1639.

When her daughter's relationship with the king fell apart in 1628, Ellen Marsvin sought to bring about a reconciliation. But when their failure was foreseeable, as early as 1629, before the divorce was pronounced at the beginning of 1630, she arranged the relationship between the king and Vibeke Kruse , a maid who she had taken over in her own service when Kirsten Munk was exiled from the court. On April 7, 1630 Vibeke gave birth to their son Ulrik Christian. She remained Christian's mistress until his death in 1648, while Kirsten Munk was under house arrest on her mother's property. Ellen Marsvin's persistent attempts to have her youngest granddaughter, born after the separation, recognized as legitimate, meant that she lost her political influence in the years that followed. The upbringing of her grandchildren, who, according to the tradition of the time, grew up with her maternal grandmother, was withdrawn from her. The youngest granddaughter Dorothea Elisabeth, who had not recognized King Christian, was also taken from her in 1636. The seven-year-old was sent to a monastery in Cologne . After Ellen Marsvin was replaced as administrator of Dalum Monastery in 1639 by her grandson Waldemar Christian, she retired to her Ellensborg Castle, where she died in 1649. She is buried in Thurø Church, which was built at her instigation in 1639 and where she had relocated the coffins of her husbands from Nørre Broby Church . Her property fell to her daughter and later to her granddaughters before the family was expropriated in 1663 because of the betrayal of the husband of the granddaughter Leonore Christine , Corfitz Ulfeldt .