The title of this article is ambiguous. Further meanings are listed under Daniel Rantzau (disambiguation) . 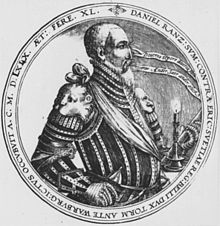 Daniel Rantzau , Lord of Deutsch-Nienhof ( Rendsburg district ), of Woldenhorn ( Ahrensburg near Stormarn) and Troiburg near Tondern, visited the University of Wittenberg together with his cousin Heinrich Rantzau when he was young (1544) , where he studied with Martin Luther . In 1547 he accompanied Duke Adolf von Schleswig-Holstein-Gottorf to the court of Emperor Charles V , under whose banner he took part in the campaigns in Italy for five years.

Returned to Schleswig-Holstein around 1556, Duke Adolf appointed him bailiff of the pledged Hildesheim office of Peine , where he recruited mercenaries to campaign against Dithmarschen . In Peine in 1559 he donated the bronze baptismal font of the then newly built St. Jakobi Church , which was cast in 1561 in the workshop of Hans Pelkinck from Hildesheim. When Meldorf was stormed on June 3, 1559 in the so-called Last Feud , he carried a main flag and was badly wounded.

He gained his greatest fame as captain of the Danish King Frederick II in the seven-year so-called three - crown war against Sweden (1563-1570), which was waged in the then still Danish provinces across the Sound and in the neighboring Swedish regions. In the battle on the Falkenberger Haide on the Svarteraae river ( Hallands län ) on October 20, 1565, with 4,000 men, he defeated a vast majority of allegedly 24,000 Swedes. The Swedish King Erik XIV was taken prisoner. In the winter of 1567–68, Rantzau led his army to Östergötland , where he had to pass dangerous bottlenecks when marching in and out.

In 1566 he became feudal lord of Trøjborg . In 1567 he received the villages of Woldenhorn (today's Ahrensburg ), Ahrensfelde, Meilsdorf and Bünningstedt, which belong to the secularized Reinfeld Monastery , along with the ruined Arnesvelde Castle .

During the siege of the fortress Warberg , which was occupied by the Swedes , he was shot in the head on November 11, 1569. A memorial was erected to him at the place of his death (Rantzauklippan). Josias von Toren succeeded in taking the fortress a little later .

Daniel Rantzau was unmarried; his bride Katharina von Damme married his brother Peter Rantzau , with whose son Daniel this line expired in 1590.

Daniel Rantzau was buried in the family crypt in the Catharinenkirche in Westensee . His brothers Peter and Tonnies erected a monumental tomb for him in the Renaissance style, which was newfangled in Schleswig-Holstein . It consisted of an epitaph and a free-standing cenotaph made of Weser sandstone with a larger than life figure of the deceased in full armor, covered by a wooden canopy with richly carved work. Daniel's cousin Heinrich Rantzau wrote the Latin obituary on the epitaph , the German probably comes from his brothers. The entire monument was originally colored, the gisant painted with imitation alabaster and gilded.

The cenotaph with the reclining figure was damaged by Swedish soldiers during the Thirty Years War . The free-standing grave monument was dismantled around 1770 because it took up too much space in the nave due to its size and thus hindered the service. The reclining figure and two writing tablets were brought to the family crypt and have been preserved. In 1918 the remains of the cenotaph were recovered and put together in front of the epitaph to give it the current shape. When the church was being renovated, the graft was reopened in 1977. One of the skulls found there had a gunshot wound in the left eye socket and is most likely to be identified as Daniel Rantzau.

On the south wall next to the epitaph are the grave slabs of his grandparents Tonnies († 1533) and Drude Rantzau († 1540), who were the patrons of the church as the owner of Gut Bossee, as well as his parents Godske and Margaretha Rantzau (both † 1564) from (German) Nienhof.