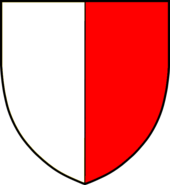 Family coat of arms of those of Rantzau

Variant of the family coat of arms of those of Rantzau

Rantzau (also Ranzow ) is the name of a noble family based in Schleswig-Holstein with the parent company Rantzau near Plön . It first appeared in a document in 1226 with the knight Johann Ranzow .

By the end of the Middle Ages she became one of the most powerful families in the Schleswig-Holstein knighthood . The older Breitenburg branch was temporarily (from 1650 to 1734) with the office of Barmstedt as the County of Rantzau, and was included under the imperial estates .

The family still exists today in the lines of the Counts of Rantzau and the Lords of Rantzau and is still based on some estates in Schleswig-Holstein, Lower Saxony (Vrestorf) and Denmark. 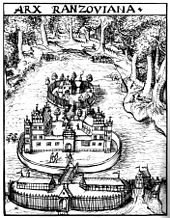 The eponymous ancestral seat of the family, Rantzau Castle near Plön, (illustration from the end of the 16th century)

The name Rantzau - or Rantzow or also Ranzow or Latinized Ranzovia - indicates a Wendish origin, it originally only referred to the headquarters near Plön. The Rantzau family itself is not of Wendish origin, but the first knights who settled here took the name of their property, as was customary at the time. The lineage of the family begins with the knight Johann Ranzow , mentioned in a document in 1226 , who settled at Rantzau Castle near Plön . He served as a squire in the service of Adolf IV and was knighted around 1235. Johann von Rantzau was the founder of the various Rantzau lines that shaped the history of Schleswig-Holstein in the centuries that followed.

The Rantzau are counted among the Equites Originarii , the primeval noble families of Schleswig-Holstein, and by the end of the Middle Ages they became one of the most powerful families of the Schleswig-Holstein knighthood . With the beginning of the modern era and the accompanying structural change from manorial to manor , they temporarily owned up to 71 estates in the duchies, which were in great economic prosperity. In particular, under Heinrich Rantzau , culture was also promoted, so that this epoch is occasionally called the Golden Rantzau Age . Many of the country's mansions that still exist today, such as Ahrensburg (around 1585), Breitenburg (in parts from 1565, the main building at the end of the 19th century), Nütschau (from 1577) or Panker (around 1650), go to Rantzau ' cal construction work back. The Rantzaus were also politically important, they provided numerous governors of the Danish king and were thus directly involved in the government of the duchies.

A branch was established in Mecklenburg. The head stable master Franz Friedrich Melchior von Rantzau (1756-1831) on Neese received in 1789 the Mecklenburg indigenous population .

In the battle of Hemmingstedt on February 17, 1500 against the Dithmarsch farmers, five Rantzaus were killed alongside numerous other Holstein knights, as Theodor Fontane sang in his ballad.

The Imperial Count of Rantzau

The imperial line was founded by Christian zu Rantzau , who came from the Breitenburg branch of the family, which provided several royal Danish governors of Schleswig-Holstein . At the end of the Thirty Years War, Christian Rantzau himself was entrusted with this position in 1648. In 1649 he was able to convince Duke Friedrich III of Gottorf . move to a sale of the Danish office of Barmstedt (in southern Schleswig-Holstein , around today's city of Barmstedt ), which was only a few kilometers south of its headquarters in Breitenburg. As part of the County of Holstein-Pinneberg, which was dissolved in 1640, Barmstedt had the status of a Danish office; it was not a traditional period of rule. The purchase price was 101,000 Reichstaler, and the Rantzau family estate along with some smaller properties was exchanged.

Christian Rantzau made the old moated castle on the Barmstedt Castle Island the new residence. In the same year he traveled with a large entourage to Vienna to the imperial court, where he appeared as the ambassador of the Danish kingdom. There he was soon appointed Imperial Chamberlain and was able to - with generous subsidies - in the autumn of 1650 with Emperor Ferdinand III. obtain his appointment as Count (with the award of the Small Palatinate ). The Barmstedt office was declared to be imperial direct ("free") territory in the diploma, although it had not previously been a rule, but only a Danish office. The county was later included in the Lower Saxon Empire in 1662 when the newly appointed Count zu Rantzau had been made de facto Imperial Count in 1653.

Christian Rantzau, who was often on the road because of his numerous offices, rarely stayed in Barmstedt. In 1655 he was able to buy back the Rantzau family estate near Plön.

He was followed in the imperial county by his son Detlef 1663-1697, also governor in the royal part of Schleswig-Holstein, and then his sons Christian Detlef 1697-1721 and Wilhelm Adolf, who was arrested on suspicion of fratricide in 1722, convicted by a Danish court in 1726 and died childless in the Norwegian fortress Akershus in 1734 . His possessions were confiscated from the Danish Crown. Above all, in 1726 the territory, which had in the meantime acquired imperial estate rights, was regarded as repudiated and illegally confiscated like an ordinary Danish fief according to secret inheritance contracts with the Danish crown "in the absence of male heirs" . From this it was already clear that Wilhelm Adolf was in no way wanted to be pardoned. After a costly process, his only sister only received the rule of Breitenburg , which two generations later passed on to another line of the Rantzau family. A lawsuit that the Rantzausch Cognaten brought to the Reichskammergericht was never decided.

To compensate for the liquidation of the imperial county in 1726 by the Danish crown, however, the emperor granted some Rantzau of other branches the title of count in 1728 , without imperial status . 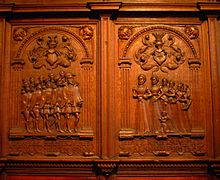 Ancestors of the older Breitenburg line

Other family members and descendants

Elements and colors from the coat of arms of the Rantzau family still appear today in some of Schleswig-Holstein's municipal coats of arms.

The numerous estates, mansions and castles that were at least temporarily in the possession of the widely ramified Rantzaus included:

50 of the mansions are shown on the edge of the so-called Rantzau panel , which was made around 1587 by Daniel Freese for Heinrich Rantzau.

The eponymous headquarters of Rantzau near Plön developed from a small fortified castle to a mansion built by Heinrich Rantzau from 1590 onwards. It remained in the hands of different branches of the family for more than 500 years until 1728.

The family owns Gut Rastorf (since the 14th century), Schloss Breitenburg (since 1526), Gut Rohlstorf (from 1846 with interruption), Gut Pronstorf (since 1875) and the Danish castle Krengerup (since 1770). . About Erica von Rantzau, geb. von Müller (1878–1958), the wife of Cuno von Rantzau , came into the family's possession of Gut Vrestorf (district of Bardowick ).

Liselotte von Rantzau-Essberger (1918–1993) brought shares in the German Africa Lines (John T. Essberger Group) to the family, as did the Austrian Oberthal Castle . In addition, Eberhard von Rantzau, co-owner of the shipping company, has so far acquired around 2,250 hectares of the Sachsenwald from Prince Bismarck from Friedrichsruh .

The Museum of the County of Rantzau is located on the Barmstedt Castle Island in the Rantzauer See in Barmstedt . In Bad Segeberg , the Rantzau Chapel and the so-called Rantzau Obelisk commemorate Heinrich Rantzau and his friendship with the Danish King Friedrich II , as well as the Temple of Nordoe near Itzehoe .

In the Copenhagen district of Nørrebro , Rantzausgade is named after the gender.

Epitaph of the Royal Danish Rittmeister Christian von Rantzow (1686–1704) in the Church of St. Georg in Nördlingen