Christian Reichsgraf von Pentz (* around 1600 on Gut Neudorf northeast of Lütjenburg ; † September 1651 in Flensburg ) was a member of Kirsten Munk's influential sons-in-law party, governor of Glückstadt and diplomat in the service of King Christian IV of Denmark. 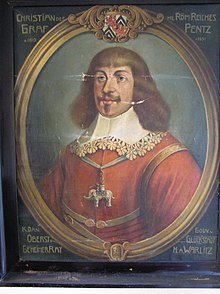 Pentz was the son of Markwart von Pentz and came from the von Pentz family, originally from Mecklenburg , who had also settled in Holstein around 1500. From 1619 he studied law at the universities of Rostock, Leipzig, Orléans and Padua. In 1627 he entered the service of King Christian IV.

During the Thirty Years War , Pentz became the fortress commander in the newly founded Glückstadt in 1630 . Pentz had already successfully defended the city from Wallenstein's troops in 1627/28 . He was thus in the favor of King Christian IV, who married the Count in 1634 with one of his daughters from the marriage on the left hand with Kirsten Munk , the very fun-loving Countess Sophie Elisabeth of Schleswig-Holstein (1619-1657).

The palace he had previously built, now called Brockdorff-Palais and used as a museum, served the count as a befitting town house in the then flourishing Glückstadt. On November 9, 1635 Pentz became (secular) canon at Lübeck Cathedral . In 1639 he "exchanged" his possessions around Lütjenburg with the Danish crown for the Wandsbek estate and received an additional 40,000 guilders in cash. In the same year, Pentz was also appointed bailiff of the Steinburg district . Already in the 18th century it was assumed that Christian IV. Included a generous dowry for his daughter in this business. In addition to his position as governor of Glückstadt Fortress, Pentz also worked as an envoy for King Christian and traveled to the imperial court of Emperor Ferdinand III on his behalf . in Vienna . One of the goals he pursued in accordance with his mandate was a new Elbzoll , which was intended to promote the further development of Glückstadt in competition with the Hanseatic city of Hamburg . Due to his proximity to Christian IV, Christian von Pentz was not only a very influential politician of his time in the duchies. However, in 1644 he did not succeed in preventing Glückstadt from being captured by the Swedes. Due to his drunkenness, which increased with age, he fell out of favor with King Christian IV. In 1648, when King Friedrich III took office. dismissed from all offices as a member of the up to then influential sons-in-law party Kirsten Munks. He died imprisoned and slept at the age of 51. After the death of her father, his wife Sophie Elisabeth supported her sister Leonora Christina Ulfeldt in the dispute with King Friedrich III.

Pentz was a member of the Fruitful Society called the Handsome .

In 1631, a good two years before his appointment as canon in the Lübeck cathedral chapter as well as before his elevation to the rank of imperial count (1636), he thought about the renovation of an epitaph of his ancestor, who had died in 1566, the squire Jasper Pentz of Nütschau . In the same year 1631 Christian von Pentz had sold the Mecklenburg property of his family for 60,000 guilders. The epitaph in the cathedral, which is preserved except for the crest, shows the coat of arms, a crowned red lion sown in a white shield with an inverted heart, on the stech helmet a (now lost) white double cross with black ends (symbolizing peacock feathers) representing the crest of the Pentz coat of arms. , above a simple tablet. Christian von Pentz added a pedigree of six generations of Pentz with the coats of arms of the wives belonging to them as a vividly designed family tree. In an additional cartridge under the epitaph and the pedigree, which is framed by baroque cartilage , a Latin inscription indicates the generous innovator. The head of the cathedral parish recorded a donation of 120 Lübische Marks in the cathedral's weekly book for the installation of the representative extension . Christian von Pentz was not buried in Lübeck Cathedral. His burial place is still unknown today.

Christian von Pentz had been a Knight of the Elephant Order since October 4, 1634 . In addition, he became a member of the Fruit-Bringing Society in 1644 and the pseudonym "the respectable" (see also web link in the German National Library)