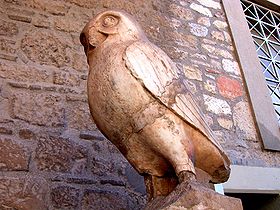 Owl on the Acropolis in Athens

Owl on a tetradrachm

The saying “ carry owls to Athens” (γλαῦκας εἰς Ἀθήνας κομίζειν or γλαῦκ᾿ Ἀθήναζε ἄγειν or ἡγεῖσθαι) stands for a superfluous activity. It goes back to the ancient Greek poet Aristophanes , who used the saying in his satirical comedy The Birds around 400 BC. BC coined. There, in verse 301, an owl flying by is commented on with the following words:

At that time there were very many owls as a symbol of the goddess Athena , the patron goddess of the city (cf. Minerva's Owl ), so that they did not have to be brought to Athens, as they can fly there much better and faster. The owl symbolized wisdom , mainly because it can see in the dark. As the Athenian illustrations show, it is a specific species of owl, the little owl ( Athene noctua ). From this, Wolfgang Hildesheimer developed the ironic story “I carry an owl to Athens”, which actually deals with a little owl.

So it is possible to interpret the sentence as a reference to the nonsensical activity of bringing wisdom into the city. It is more likely, however, that he was referring to the coins of Athens on which the animal was emblazoned. Aristophanes said it was superfluous to send silver coins (with the owl) to rich Athens. In verse 1106 he writes about this: "There will never be a lack of owls."

Until the changeover to the euro at the beginning of the 21st century, an owl was embossed in the Greek drachma . The illustration of an Attic silver four drachma coin struck by hand between 490 and 220 BC was chosen for the reverse of the Greek 1 euro coin.

Roman historiography adopted the proverb as ululas Athenas (ferre) . Over time, many more proverbs have been formed based on this saying. The phrases “bring fish to the Hellespont” ( pisces ad Hellespontum ferre ) or “bring crocodiles to Egypt” ( crocodilia ad Aegyptum ferre ) were already known in ancient Greece . More modern variants are for example "bring beer to Munich", "carry coal to Newcastle (alternatively Birmingham)" (English: bring / take / carry coals to Newcastle ), "give sandwiches to the baker's children" or " take your own samovar to Tula " (Russian proverb; the tea makers called samovars are made in the city of Tula ). Similar is the Latin ligna in silvam (ferre) "to carry wood into the forest" (Horace, Satiren I, 10,34).