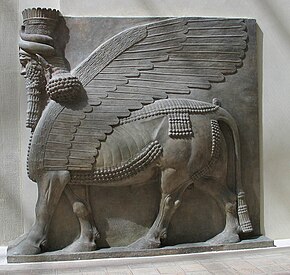 A colossal statue is a fully three-dimensional statue ( sculpture or plastic ) of several to many times life size, mostly of a human person or an animal (less often an object) made of stone, also made of bronze , copper or precious materials such as gold , ivory on iron with wood as a support frame. Colossal statues are also known as monumental statues .

Colossal statues, such as winged bulls and lions in Mesopotamia, were a common representation practice in advanced civilizations . The main purpose is the symbolic representation of God and ruler as a statue or seat, less often as an equestrian statue. People believed that a statue of a god had to be large to be beautiful, significant, and appropriate to the deity.

The custom of making giant statues disappeared after the fall of the Roman Empire in the Mediterranean and was only revived at the beginning of the Renaissance . In the Far East, however, colossal Buddha statues continued to be made, such as B. the Shwethalyaung Buddha (built in 994).

Etymologically , the word "colossus" comes from Asia Minor (probably from Phrygian , see the place name Kolossai ), around 1000 BC. In ancient Greek - Doric imported word (κολοσσός, Latin colossus), which initially only meant a statue without any reference to size. After it was used on the Helios of Rhodes , it became a synonym for a huge, huge statue, later generally for everything oversized. 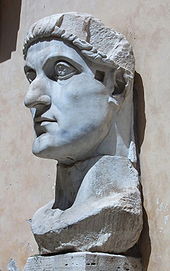 Head of the colossal statue of Emperor Constantine I.

The Zeus statue of Phidias and the Colossus of Rhodes are among the wonders of the world .