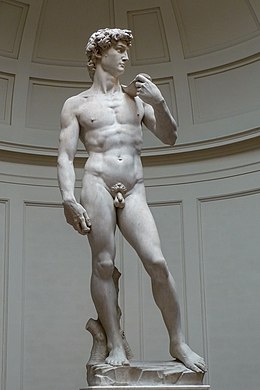 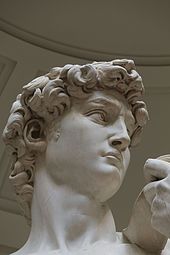 The David of Michelangelo (1475-1564), from 1501 to 1504 in Florence emerged is the first monumental statue of the High Renaissance and is considered the most famous sculpture in art history. The original, carved from a single block of marble , has been in the Galleria dell'Accademia in Florence since 1873 . The 5.17 meter tall figure is estimated to weigh almost six tons.

The sculpture depicts the biblical David at the moment when he takes up the fight against the giant Goliath with the slingshot already on his shoulder ( 1 Sam 17  EU ). David's body appears in a relaxed contraposto position, he carelessly carries the sling over his left shoulder. The tension ready for battle can be seen in the protruding veins of the right hand that surrounds the projectile, but above all in the neck and face area: in the taut neck tendons, the tense lips and nostrils, the wrinkled forehead. David's gaze is focused on a point in the distance.

Michelangelo's depiction differs from earlier versions from the Florentine Renaissance in that it shows David before the fight against the giant. The sculptors Donatello and Verrocchio and the painter Andrea del Castagno portray the youthful hero with the severed head of Goliath. Michelangelo, on the other hand, no longer directs the viewer's attention to the battle that has ended, but to the imminent victory.

In 1501 Michelangelo received an order for a colossal David statue from the influential Arte Della Lana , the wool weavers' guild, in Florence. He had a huge Carrara marble block , more precisely a statue block , at his disposal, which had been stored in the cathedral garden since 1468 after an extensive two-year journey. This block was over five meters long, weighed about twelve tons, but also had small holes and veins. As early as 1464 Agostino di Duccio was commissioned to create a David figure from the block, as was Antonio Rossellino in 1476 ; both sculptors had given up the work and left the massive block in a roughly hewn condition. Michelangelo was now to complete the plan drawn up almost forty years earlier by the Domopera to add a David to the program of figures on the outer buttresses of Santa Maria del Fiore . The proportions of the figure, which at first glance appear deficient, were adapted to the strong underside of the intended location at a great height outside the cathedral choir .

In the spring of 1504, a commission appointed by the city's Signoria , which included the artists Piero di Cosimo , Sandro Botticelli and Leonardo da Vinci , decided, however, for a different location for the almost completed David . Although opinions differed regarding its installation, the majority of the commission chose the place in front of the Palazzo Vecchio , the seat of the Signoria . The sculpture was ceremoniously unveiled there on September 8th. On the way from the cathedral to the Piazza della Signoria , it is reported that the structure of the figure was pelted with stones by young people and the Signoria had put up a guard to protect her.

Reception of the original statue 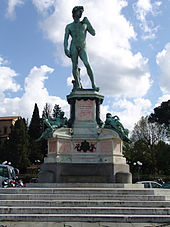 The David was for a short time to landmark the free citizens of the city of Florence. In 1512 the Medici , who had been banished from the city in 1494 , forced their return to Florence, during which there were serious disputes. A bench flew out of a window in Palazzo Vecchio and smashed the statue's left arm. The young Giorgio Vasari picked up the fragments and kept them. After the rule of the Medici was finally secured, he handed it over to Cosimo I in 1543 , who had the figure restored.

In the 19th century, the surface of the marble sculpture showed such significant damage as a result of the weather and the centuries-old infestation of bird excrement that it was now wanted to give it a closed place. After long negotiations - we are talking about thirty years - in 1873 she was given a domed room in the Florentine Accademia , the Tribuna designed by the Italian architect Emilio de Fabris , where it has become a tourist attraction, cleared of all traces of its history .

In 1991, the statue was damaged by a person who was able to knock some pieces of marble out of the toes of his left foot with a hammer before being overpowered by security forces.

In 2010, the Italian Minister of Culture, Sandro Bondi , claimed ownership of the figure by the Italian state. The state has so far failed to protect the five-meter-high sculpture from earthquakes and to place it on an earthquake-proof base in order to reduce the risk of it falling and being destroyed.

Copies of the statue

In 1910 a marble copy was placed in the original place of the David statue in front of the Palazzo Vecchio . A bronze cast forms the focal point of an ensemble on the Piazzale Michelangelo , built around 1900 , which is flanked by other Florentine sculptures by Michelangelo - also cast in bronze.

There are now copies of the "David" worldwide. After stops in Cologne and Düsseldorf, since 2010 Hans-Peter Feldmann's "David" has found its final place in Kant-Park in front of the Lehmbruck Museum in Duisburg .

With a size of 1 mm and 0.1 mm, a copy made of copper, which was made using a special 3D printing process , is probably the smallest statue of David in the world.