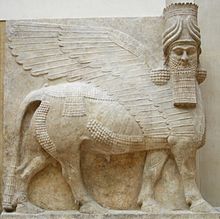 Lamassu from Dur Sharrukin in Assyria 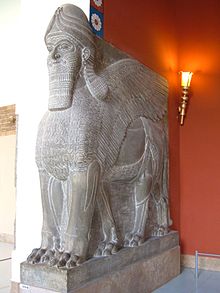 Schedu in the Pergamon Museum

Lamassu (also šedu , Schedu) is the name for an Assyrian protective demon with a bull's body, wings and human head.

The Sumerian word lama , Akkadian lamassu , denotes a protective deity who is usually female. She is often depicted as a standing figure who leads guests to a higher god. So she is actually a servant. Her male counterpart is alad or Akkadian Sedu called. These monumental statues are known as aladlammû ("guardian spirit ") or lamassu , which means that the originally feminine word has now been used to denote a demon with superior masculinity . In a modern interpretation, they combine the strength of a bull, the freedom of an eagle and the intelligence of a human. Female Lamassus are called apsasû . 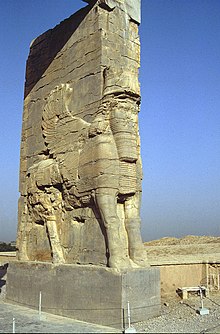 Lamassu at the Gate of All Lands, Persepolis

In the New Assyrian Empire (approx. 883-612) large bull monuments, often with wings and always with human heads, were erected as gatekeepers at the entrances to royal palaces such as Khorsabad and Nineveh . They had a malevolent function. In one text there is the magic formula "May the good šêdu walk on my left and the good Lamassu on my right " (elsewhere šêdu precedes and Lamassu behind the person to be protected) Usually they had 5 legs. Lamassus is also known from the palaces of the Persian kings. There are no more in Pasargadae , but in Persepolis they are still at the “Gate of All Nations”. So their hooves can still be seen in the "unfinished gate". In the building, which could be identified as either a council hall or "triple gate", lamassu served as the capitals of the columns.

There are Greek coins that depict Lamassu, e.g. B. from the Sicilian city Panormus, today's Palermo , which as a Phoenician colony possibly had artistic connections to the east. Guardian deities with lion bodies are also known and are commonly called sphinxes .

The stone statue Lamassu, which has guarded the Nerval Gate in Nivine since 700 BC, was destroyed with a hammer drill by a member of the terrorist militia IS in 2015 . In 2018, the American artist Michael Rakowitz recreated a protective demon made of date cans on the monument base in Trafalgar Square , which resembles the Babylonian mythological figure Lamassu, to remind of what no longer exists.