The Trafalgar Square is a great place in the center of London , as its real center, he is considered by many. Trafalgar Square is the largest public square and has been a central meeting place since the Middle Ages. Here run from Westminster Coming street Whitehall , from Buckingham Palace the street The Mall , and St James's Palace , the Pall Mall together. The Strand road leads to the City of London . Leicester Square is in the immediate north .

In the course of urban redesigns under Prince Regent Georg , the square was planned by John Nash in 1820 . It received its current form from 1840 to 1845 by Sir Charles Barry . In 1939, Sir Edwin Lutyens' two old fountains were replaced by new ones with large stone basins and stronger pumps. Construction on the south side of the square in the late 1950s revealed debris from the last warm period 125,000 years ago, and bones of cave lions, rhinos, forest elephants and hippos were found. The last major redesign took place in 2003 when the street in front of the National Gallery was converted into a square, to which a newly laid wide staircase leads.

In the middle of the square is a memorial that the London Admiral Nelson placed in thanks for the victory of the English over the French and Spaniards who had allied themselves in the Battle of Trafalgar . Admiral Lord Nelson was fatally wounded in this famous battle (1805) and was finally brought back to London and buried there in St Paul's Cathedral . The Nelson column ( English Nelson's Column ) with the Admiral on the top is 51 meters as high as Nelson's flagship HMS Victory built from the keel to the mast top and was. 1842 At the foot of the column are four bronze lion sculptures created by Sir Edwin Landseer .

To the north of the Nelson's Column are the fountains created by Sir Edwin Lutyens. These two fountains are a replacement for two old fountains that are now in the Canadian cities of Ottawa and Regina . The western well is a memorial to Admiral Jellicoe , the eastern well to Admiral Beatty .

On the southern corners of the square are the statues of Generals Napier and Havelock . There is an equestrian statue of George IV in the northeast corner and an empty plinth in the northwest corner (see the fourth plinth ). There is also a bronze bust of Admiral Cunningham at the foot of the stairs that lead to the terrace in front of the National Gallery .

At the north end of Trafalgar Square is the National Gallery, a major art museum. The church of St Martin-in-the-Fields is to the northeast of the square. Concerts are often held here, including a. from the Academy of St Martin in the Fields . The Canada House , built in 1827 , on the west side of the square, houses the consular and cultural department of the Canadian embassy . On the east side is the South Africa House , built in the 1930s , in front of which many anti- apartheid demonstrations took place in the 1980s , as the South African embassy is located in it .

A strictly enforced feeding ban on pigeons has been in effect on the square and around the adjacent buildings since 2000 . I.a. caused pollution and damage to buildings from a large population of birds in this area. 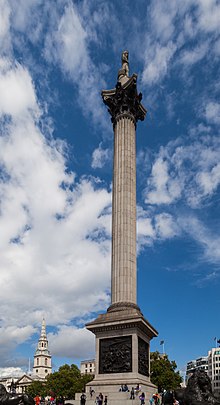 View from the National Gallery

From the entrance of the National Gallery, the viewer gets an impression of width, through the size of the square, and depth, through the south-facing Whitehall, with the Parliament and clock tower at the end. Nash and Barry had probably deliberately planned and implemented it that way. The central Nelson's Column then draws your gaze upwards. The overall impression is overwhelming and gives a sense of the greatness that the British Empire had at the time. This impression is reinforced by the statues of war heroes and monarchs of bygone eras on the square . The Westminster – Trafalgar Square axis is bordered by the Department of Defense and Downing Street .

With the installation of the first wells with their large outdoor pools in 1845, it was a. the purpose of preventing rioting with the following excesses. Due to its central location, Trafalgar Square has been the site of expressions of joy and political demonstrations throughout its history. So on May 8, 1945 people gathered here and in the confluent Whitehall to hear Winston Churchill's address on the victory over Germany . On March 31, 1990, Trafalgar Square was one of the main scenes of the "Poll Tax Riots" in connection with the planned introduction of a poll tax .

There are often festivals of various kinds in Trafalgar Square. Examples are the London Film Festival, art or comedy festivals.

The Sir Charles Barry designed, built 1841 fourth base (Engl. Plinth ) in the northwest corner was originally an equestrian statue of William IV. Wear, but remained empty due to lack of funds. Later it was not possible to agree which monarch or military hero should be placed there. In 1999 the Royal Society of Arts initiated the Fourth Plinth Project, which temporarily used the plinth for the works of three contemporary artists, Mark Wallinger (1999), Bill Woodrow (2000) and Rachel Whiteread (2001). The base was then unused again, with the exception of a few, partially unapproved advertising gimmicks by companies. In the debates about its further use, the proposal for a Nelson Mandela monument received a lot of attention. A government-appointed committee on the future use of the plinth evaluated the public reaction to the Royal Society of Arts project and unanimously recommended that the fourth plinth should continue to be used for series of contemporary works of art commissioned by leading national and international artists become.

The new Greater London Authority then took over responsibility for the base and began a series of changing exhibitions. In September 2005 she started with the marble sculpture Alison Lapper pregnant by Marc Quinn , a 3.6 m high and 15 ton heavy statue of the naked and heavily pregnant Alison Lapper , and in November 2007 she moved to the temporary exhibition of the sculpture made of colored glass plates Model for a Hotel 2007 by the German artist Thomas Schütte .

From July 6, 2009 to October 14, 2009, the plinth was the subject of the Living Art project One & Other by the English sculptor Antony Gormley . A total of 2,400 selected visitors to the square were invited to represent themselves on the plinth for an hour each.

From 24 May 2010 to January 30, 2012 presented the Nigerian-British artist Yinka Shonibare with Nelson's Ship in a Bottle an oversized Buddelschiff on the fourth plinth made. It was subsequently bought by the National Maritime Museum in Greenwich and is now on display there.

In July 2010, six applicants were shortlisted for the change of the sculptures on the plinth planned for spring 2012. These were the British artist Brian Griffiths with a replica of a Battenberg cake , Mariele Neudecker with a replica of Britain as a mountain landscape, the American-Cuban artist couple Allora & Calzadilla with a replica of an organ as an ATM, Hew Locke with an equestrian statue that was hung with amulets as an idol , Katharina Fritsch with a blue tap made of glass fiber reinforced plastic and finally Elmgreen and Dragset , who created a rocking horse with a boy sitting on it called Powerless Structures. Fig. 101 created. The decision was made in favor of the bronze sculpture by Elmgreen and Dragset, which has graced the fourth plinth since February 23, 2012 and was replaced by Katharina Fritsch's blue cock on July 25, 2013.

From March 5, 2015 to September 5, 2016, Hans Haackes Gift Horse was on view: The depicted skeleton of a horse made reference to a work by George Stubbs in the neighboring National Gallery; a “gift ribbon” was draped around a fore leg that made a live ticker with the share prices of the FTSE 100 .

Until March 2018, David Shrigley's Really Good was presented, a monumental "thumbs up" gesture, whose raised, oversized thumb refers to the Nelson column. For the period from 2018 to 2020, the contribution The Invisible Enemy Should Not Exist by Michael Rakowitz was selected, a reinterpretation of a Lamassu that deals with the destruction of Iraqi cultural assets as a result of the Iraq war and by IS . In 2020, the installation The End by British artist Heather Phillipson , which deals with video surveillance of public spaces, will follow .