Under a poll tax means a tax in which each taxpayer pays the same absolute amount of tax - without consideration of personal circumstances such as income , assets , marital status , performance , etc.

One of the greatest advantages of the poll tax, in addition to the simplicity of the calculation (and thus the low bureaucratic effort), is its economic efficiency . Proponents of such a tax are of the opinion that it would benefit the economy, since only a fixed amount of tax would not penalize economic activity. In addition, they claim that it is also fair because - analogous to a membership fee in associations - each person only pays as much as they receive back on average in government benefits.

At the municipal level, the poll tax avoids inequalities between municipalities; it prevents municipalities generate less affluent population, even with a higher tax rate less revenue per capita and thus less public general interest can provide, or vice versa. This fact was decisive for the introduction of the Poll Tax by Margaret Thatcher in Great Britain, which came even from a less affluent place. If the communal finances are independent of the income level of the residents, in the opinion of the proponents also communal decisions are avoided that favor the settlement of wealthy citizens and thus this population group, e.g. B. a preference for middle class -typical single-family house structures in development planning.

Poll tax does not allow taxation based on productivity, which is why it is criticized as socially unjust . In a tax system based on the poll tax , low- and middle-income earners would have a higher tax burden relative to their income than high-income earners.

The larger proportion of small and middle incomes in the total number of taxpayers would mean that the main burden of tax revenue would be borne by these classes. For this reason, the poll tax in democracies is hardly enforceable and is hardly used in modern tax systems.

It is important to mention that the term “justice” in this context is primarily aimed at distributive aspects (distribution of income). From an allocative point of view, under special assumptions (see the following paragraph), the poll tax is the only tax that economic entities cannot respond to. Therefore, the impact on the allocative efficiency of this tax is lowest, namely zero. This means that this tax has no influence whatsoever on individual preferences with regard to the purchase decision between different goods . Temporal preferences also remain - consumption today vs. Consumption tomorrow - as well as aspects relating to the division of free time and work aside. In a world in which individuals are homogeneous, work the same amount and earn the same amount, poll tax would be the most efficient and fairest form of taxation.

The claim that the poll tax is economically efficient and even first-rate is based on the assumption of complete information from the state (with regard to the work-leisure decisions of individuals) or the use of a weakly separable utility function . In the latter case, the individual's work-leisure decision is not influenced by the consumption decision - therefore goods prices should remain undistorted. This is exactly what analytically equivalent cap and flat taxes do to uniform taxes on goods. Under more realistic assumptions, however, the economic efficiency is questionable, since the decisions about the labor supply depend on the interrelationships between leisure and consumer goods ( substitute , complement ). According to Stefan Homburg , goods, flat-rate or poll taxes that are optimally distorted, but not distortion-free, are actually efficient and second best .

However, certain indirect taxes have an economic effect similar to a poll tax (e.g. taxes on indispensable goods such as salt , of which wealthy citizens do not consume significantly more than less wealthy citizens). Fixed levies related to household level, such as the German broadcasting license fees, have a similar effect to poll taxes .

From the Brockhaus Konversationslexikon from 1908:

“Poll tax, the crudest and most imperfect type of personal tax, which hits individuals equally without distinction and regardless of their greater or lesser productivity. It was imposed by name on subordinate peoples and is generally closely related to bondage. "

A poll tax in early modern France ( Ancien Régime ) was called capitation . The capitation was issued on January 18, 1695 by Louis XIV ("Sun King") and was intended to end the previous economic crisis in France and to finance the War of the Palatinate Succession . The capitation was mostly a reaction to the decreased revenue from the waistline . The effectiveness of this poll tax, which originated in the Middle Ages, had fallen sharply by the end of the 17th century due to numerous exceptions. Accordingly, only a few exceptions were allowed for the capitation: the clergy was not recorded, but had to make a compensation payment of 4 million livres per year. Even the poorest sections of the population, who paid less than 40 sous-waist, were exempt from capitation. The entire French population was divided into 22 tax brackets. In the highest class, 2,000  livres per year had to be paid, in the lowest class 1 livre.

The tax was originally only intended as a war tax and was initially lifted after the Peace of Rijswijk . Capitation for the War of the Spanish Succession was reintroduced as early as 1702 , but organized differently. Instead of central registration, the municipalities collected the tax from their residents. This meant that the nobility and some high-ranking bourgeoisie largely evaded their payment obligations. However, the wealthy high nobility at the court of Versailles may not have succeeded in this as far as possible, as they were within the immediate reach of the royal administration. After the end of the Spanish War of Succession in 1714, the capitation remained. In 1705 and 1747 it was increased by 2 sous per livre paid and doubled in 1760 for those who were not subject to the waistline. Nevertheless, the proportional burden for the waist payers was significantly higher than for the French who were freed from the waist. In 1789, those subject to the waistline paid an average capitation of one eleventh of their income, those who were waist-exempt paid one ninetieth. In total, a capitation of more than 41 million livres was levied that year.

The English King Richard II levied a poll tax in 1380 to finance the Hundred Years War against France. This led to the Peasants' Revolt , in the course of which several nobles were killed. 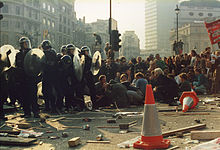 Riots in Trafalgar Square on March 31, 1990 over the Poll Tax

The government of the British Prime Minister Margaret Thatcher introduced the poll tax community charge (better known as poll tax ) in Great Britain at the end of the 1980s , but this provided a reduction for particularly low-income citizens. However, 18 million Britons refused to pay the tax. The protests culminated on March 31, 1990 in a demonstration with around 70,000 participants in London , which also resulted in violent riots. Ultimately, the community charge was decisive for the crisis and the resignation of the Thatcher government. Der Spiegel wrote in March 1991:

“In order to please the house and landowners who are close to her, Ms. Thatcher reformed the local tax with her own radicalism. Real estate ownership was no longer the basis for calculation, but the number of residents. Suddenly the wealthy single resident of a villa paid just as much tax as every single adult in a rented apartment that was occupied several times.

The people react with persistent bitterness to the blatant social injustice. Around 7.5 million Brits currently no longer pay their poll tax, the town hall coffers are emptying. The explosive power of this tax was shown drastically last week: Major conservatives lost one of their ten safest constituencies, Ribble Valley , to the Liberal Democrats in a by-election .

The premier's intention to cancel the levy and return to real estate tax was met with furious opposition from Thatcher's friends in the party; In the middle of last week, government members even threatened to resign. You don't want to burden 18 million home and landowners with a property-based tax - and they are mainly Tory voters. "

The community charge was eventually abolished under the new Prime Minister John Major.

In some Swiss cantons , the municipalities levy poll taxes known as “personal tax”. In the canton of Zurich z. B. Personnel tax is 24  Swiss Francs (Section 200 of the Zurich Tax Act). In the canton of Friborg , the corresponding Article 14 of the law on municipal tax was repealed on January 1, 2009.

In traditional Islamic law , the jizya is a poll tax that non-Muslim subjects ( dhimmis ) have to pay. In the Syrian capital Damascus, the Christian population in the Middle Ages had to pay a jizya around 650 (see also the legal status of dhimmis in the Sharia ).

The Constitution of the United States of America prohibits the collection of direct taxes by the federal government. In response to the 15th Amendment to the Constitution of 1870, which guaranteed all citizens regardless of their skin color, the right to vote, numerous southern states made the payment of a poll tax a prerequisite for participation in the election. Exceptions were all those whose ancestors had already chosen. In this way, most of the non-whites continued to be excluded from voting. It was not until 1964 that this practice was prohibited by the 24th amendment to the constitution .