In economics is assets ( english assets ) in money expressed value of all tangible and intangible assets , in the ownership of a business entity are.

The definition of the concept of wealth depends on the considerations of expediency of the person who wishes to examine wealth for a particular goal . For economic purposes it is in any case necessary that an economic value can be ascribed to the object according to objective standards and that the economic entity may freely dispose of its assets , whereby it is not necessary that the assets also generate income . Moreover, does not matter whether and how quickly it usable is. If the business entity has transferred parts of its assets to security buyers as collateral , it may not dispose of them (only use them ); Nevertheless, a motor vehicle assigned by way of security belongs to the assets of the security seller , who may even account for the vehicle as fixed assets ( Section 246 (1) HGB ). Gold or land you use yourself do not generate any income, but are still part of your assets. Although there are inalienable administrative assets within state assets ( Latin res extra commercium ) - which directly serve the fulfillment of public tasks and public purposes - they belong to state assets. Assets do not include anything that is not owned by the asset holder, i.e. all things that are merely in his possession ( loaned , rented , leased , leased , stolen or found things).

Depending on which business entity over the assets as the owner or right holder has, it can be between private assets ( households ), operating assets / operating assets ( companies ), church property ( church ) or Treasury ( State and its subdivisions as public administration , state enterprises or public utility companies differ) . They all form part of the national wealth aggregate as the sum of all net wealth within an economy . " Federal assets are basically all tangible and monetary assets owned by the federal government, including rights and claims ...". The shares of individual economic units in total assets are called personal asset distribution . In addition to purely material goods (e.g. cash in hand , real estate , machines , investments ) , business assets also include the equivalent of intellectual property (e.g. patents , licenses or brand names ). The private assets of private households are made up of residential real estate , household effects , motor vehicles , cash , investments , jewelry or collections .

The assets generally forms a legally impersonal entity because it is made of different assets composed, by a common economic purpose are interconnected and can develop its commercial value only as a unit. Wealth is a quantity and is reduced through sale , theft , depreciation or expenditure that reduces wealth and increases through purchase , donation , inheritance , increase in value or income that increases wealth .

The concept of economic wealth initially emerged as a legal concept . Fortune ( Latin bona , patrimonium ) played a central role in Roman law . Within the legal capacity one knew the capacity to have one's own property. Children were legally but not financially capable. Since things ( Latin res ) represent the most essential means for people (for food or for consumption or use), the Romans created rules about the acquisition of such things for the purpose of property ( Latin dominium ). All of this property was called property (after deduction of debts).

For a long time in the Middle Ages, the noun “property” did not exist, only the verb “be able” in the sense of “able, able”. From an Upper Austrian wisdom from the year 1539 the substantive use emerges for the first time that "ain every burger ... his fortune ... aines should pay tax every year at sworn aid". This is also the first indication of a wealth tax. In the Middle Ages, wealth was accumulated as wealth with princes , emperors or kings ; it was called Kammergut at the time . The state domain , on the other hand, refers to the property belonging to the state. In the 15th century, big business appeared outside of the sovereigns among merchants in German ( Fugger ) and Italian cities ( Medici ). The fortunes of the Fugger are said to have increased approximately tenfold from the start of Jakob Fugger's self-employed activity (from around 1487 to 1511). In 1723 Anna Maria Luisa de 'Medici was the last of the branch to inherit the vast fortunes accumulated by the family in earlier centuries: palaces and villas, estates and jewels, precious stones and the world's largest art collection. The patricians and some Lombards were also considered wealthy .

Since 1608 the noun use as "money, goods of monetary value" has been common. In 1610, Switzerland decreed that anyone who wanted to become a citizen here had to own 1000 guilders of pure property. In 1733, equity was considered to be the merchant's assets: “Capital is called ... the assets of a tradesman”. The General Prussian Land Law (APL) of June 1794 knew "baares assets" (I 2, § 11 APL) or "movable assets" (I 2, § 10 APL). For Carl von Savigny in 1840 “the debts were to be regarded as part of the property”, who then defined the property as “the sum of rights that remain for the owner after deduction of the debts”. Since then, the legal definition of assets has taken into account assets and liabilities , while the so-called “natural definition of assets” only includes assets.

In 1957 Milton Friedman added labor capital ( English human capital ) as a wealth in the form of human knowledge and qualifications . Work capacity thus represents the ( discounted ) in cash valued skills a worker represents income to achieve.

According to § 1085 BGB , usufruct is also possible on the property, but only on the individual objects belonging to the property.

A distinction must be made between the business and economic perspectives.

Assets in the business sense

The gross wealth also includes the debts , whereas the net wealth includes the debts ( net worth ). The difference between accounts receivable and accounts payable is often referred to in economics as monetary wealth. For creditors ( creditors , creditors ), the net assets form the most important credit basis ( creditworthiness ) and are the prerequisite for the possible provision of credit collateral . Many business (such as asset intensity , asset coverage , capital commitment ) and economic indicators (such as money supply , financial assets ) deal with wealth . The return on assets ( English return on capital employed , and return on investment ) is calculated by dividing the assets income by the fixed capital ( English capital employed ):

It shows the return on a certain asset. These key figures are used by the asset holder, their creditors, financial analysts or the interested public to assess the economic situation of a business entity.

Larger assets are to be viewed as a portfolio , the composition of which is subject to risk diversification through portfolio management or asset management . On the asset itself can in fact market , interest rate or exchange rate risks affect and impairment or loss of value result of the assets. In this way, the unsystematic risk of the assets can be diversified, whereas the systematic risk can only be countered by hedging .

The assets that in some countries the subject of substance control , as the wealth tax is no longer assessed since January 1997 in Germany. If this tax is not earned through the return on assets, there is a loss of wealth. The levying of a wealth tax can lead to domestic assets being transferred abroad and then called foreign assets .

Wealth in the economic sense

The national accounts (VGR) define national wealth in the context of the balance sheet as the sum of all net wealth within an economy . The inventory of material goods , receivables and liabilities are recorded as part of the asset accounting .

The European System of National Accounts (ESA) compares assets, assets ( assets and receivables ) with liabilities and liabilities in the preparation of balance sheets . The balance is the net worth . For the economy as a whole, this is referred to as national wealth .

The assets consist of the produced and non-produced assets. 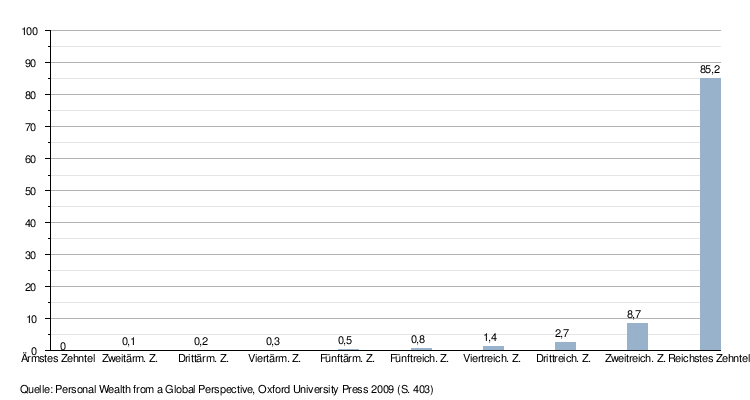 The distribution of wealth compares the wealth of different parts or groups in a society.

Above all, poverty and wealth can be measured through the availability of material resources in the form of income and wealth. Wealth based solely on income is only possible if you are gainfully employed , so that wealth disappears when you are not in gainful employment. Wealth can also “dwindle”, but is usually more permanent than income. The interdependence of income and wealth arises from the fact that income can lead to wealth ( saving ) and wealth in turn can generate income from income from wealth.