They are aquatic and marsh plants that can develop dense stands in wetlands . A special feature of the bulrush is the striking two-part inflorescence made up of a purely female-flowered and a purely male- flowered cobs above .

Illustration: Broad-leaved (outside left and right) and narrow-leaved cattails (center)

The seeds are carried away with the wind.

Cattail species are deciduous, perennial herbaceous plants . They are aquatic and marsh plants ( hydrophytes , helophytes ) with strong rhizomes that creep underground . They are able to develop dense stands ( polycormons ).

The leaves are alternate and strictly two-lined ( distich ) on the stems, which are always hairless . The sessile, simple leaves grow stiffly upright, can reach a length of up to 4 meters, are linear, grass-like and consist of a spongy, compressible floating tissue. The parallel- veined leaf blades are arched outwards and flat on the inside, so that the cross-section is a semicircle - in contrast to the hedgehog's cob with a triangular leaf cross-section. The leaf sheaths are always open. At the vaginal orifices in the transition to the blade, there are no ligules .

Cattail species are single sexed ( monoecious ). The total inflorescence (inflorescence) of the bulrush consists of a thicker, purely female-flowered and a thinner, purely male-flowered partial inflorescence, separated by a species-specific long stem section. These are designed as cylindrical or spherical pistons in which the individual flowers are densely packed. The inflorescence is never of bracts interspersed (bracts) - in contrast to the types of Hedgehog piston plants . The unisexual, threefold single flowers are huskless. The female flower consists of the flower envelope (a) ( perigone ), which is reduced to a dense wreath of hair and a stalked ovary (c) with a spatulate stigma (d). The two to five stamens (b) of the individual male flowers sitting on a stem are surrounded by a few covering bristles (a). The flowering period of the bulrush extends from May to August.

The distribution unit ( diaspore ) is formed from the achenes , a single-seeded nut fruit with a permanent style and the perigone hairs on the tail (ovary stalk). 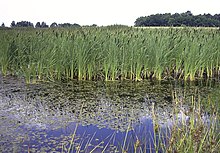 The Typha species are pollinated by the wind ( anemogamy ).

The diaspores spread through the wind ( anemochory ) and water ( hydrochory ). The fine perigone hairs serve as flight or swimming organs. In most species, the seeds leave the fruit shell after prolonged contact with the water, sink and germinate under water ( anaerobically ). In some species they remain in the fruit shell and germinate in the air under aerobic conditions.

The vegetative spread occurs via rhizomes. The Typha TYPES can at suitable locations dense species-poor stocks, so-called reedbeds develop. The Typha species are adapted to damp to wet, sometimes brackish and temporarily flooded habitats. They colonize waterfronts, swamps and moors .

Typha species are common worldwide from the temperate zones to the tropics ( cosmopolitan ) and common. The Typha species are distributed differently. The broad -leaved cattail ( Typha latifolia ) , for example, is widespread . It occurs in the temperate zones of the northern hemisphere as far as South America and parts of Africa . Other Typha species only colonize a limited area . T. capensis is restricted to an area from Uganda to South Africa or Typha davidiana only to China .

The generic name Typha is derived from the Greek word týphos for smoke. It is referred to the brown, smoke-like color of the fruit cobs.

The exact placement of the genus within the order Poales has long been controversial. For example, some authors included the hedgehog genus in the cattail family due to their morphological similarity, while others preferred to keep separate, monogeneric families (Typhaceae and Sparganiaceae). According to the strictly phylogenetically oriented APG III , however, the hedgehog cobs are part of the cattail family.

The genus Typha includes 16 to 40 species , depending on the author :

There are also hybrids:

Humans have been using cattails to produce fire since the Paleolithic , as nitrated cattail is highly flammable.

All parts of the plant are edible. The starch- rich rhizomes in particular can be cooked like vegetables. Long before other types of grain were made usable by humans, the starchy rhizomes were apparently processed into flour 30,000 years ago. Up to 8 tons of flour can be obtained from the yields of one hectare of marshland.

Bulrushes are used to purify wastewater in sewage treatment plants and to detoxify soils and sludge. These near-natural processes are summarized under the technical term " phytoremediation ", in which the complex abilities of plants and the microorganisms associated with them in the root area are used. Cattails qualified for cultivation because of their high primary production . They are gaining in importance as a renewable raw material, for example for insulating material, as a peat substitute or building and heating material.

Cattail species are used as decorative planting of ponds in parks and gardens. The dried inflorescences are used in floristry . In this context, the lower, female, thick part of the inflorescence, which is later found and dark brown and looks as if its surface velvety , cattails called.

The bast fibers of some types can be processed into staple fibers.

From the straw, wickerwork can be used for. B. Straw hats are made.

In the 2000s, the architect Werner Theuerkorn developed an insulating material from Typha angustifolia by gluing strips of the leaves with magnesite to form panels and initially using them for the renovation of a historic half-timbered house in Nuremberg. In the meantime, several other buildings have been insulated with the 2 to 12 centimeters thick, diffusion-open , capillary-active , sound-absorbing and mold-resistant panels, which are made in a small factory in Schönau (Rottal) in Bavaria, due to the tannins they contain . The Fraunhofer Institute for Building Physics built a hut at its test branch in Holzkirchen (Upper Bavaria) for a long-term test .