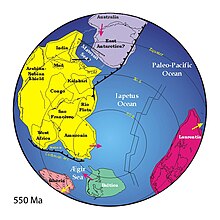 Possible situation around 550  mya with the Japetus in the center of the picture. Rodinia is already broken.

The Iapetus (also Japetus , often also in the combination Iapetus-Ocean or Japetus-Ocean ) was an ocean in the late Neoproterozoic and early Paleozoic Era (about 700 to 400  mya ). This ocean opened up between the geological continents Laurentia , Baltica and Gondwana .

The Iapetus was named after the titan Iapetos of Greek mythology. The name was proposed by W. Brian Harland and Rodney A. Gayer in 1972 (as Iapetus Ocean or just Iapetus ).

Schematic representation of the paleogeographical development of Avalonia , Baltica and Laurentia from the Ordovician to the Devonian with the closure of the Iapetus

By 1000 mya all land masses on earth were united to the supercontinent Rodinia . The only ocean that existed then was Mirovia . Around 800 mya, Rodinia began to break up into several continents. The newly created oceans between these drifting continents have their own names. The ocean, bounded by the large southern continent of Gondwana and the small continent of Baltica on the one hand and Laurentia on the other, and newly formed in the outgoing Neoproterozoic, is called Iapetus. It lay in the southern hemisphere and stretched from the vicinity of the south pole to the equator.

The rift phase of the Iapetus lasted until around 500 mya, i.e. until the Upper Cambrian . The Tornquist Ocean opened up between Baltica and Gondwana in the Cambrian . A subduction zone had already formed off the west coast of Laurentia in the Lower Ordovician ; the beginning of the closure of the Iapetus. At the same time, the small continent Avalonia broke off from the northern edge of Gondwana and drifted quickly northwards towards Laurentia and Baltica. The Iapetus was now also subducted under Avalonia. A new ocean opened up between Avalonia and Gondwana, the Rhine Ocean . In the Upper Ordovician, Avalonia collided with Baltica, closing the Tornquist Ocean. After this collision, Baltica and Avalonia drifted together against Laurentia. Baltica / Avalonia and Laurentia collided in the Lower Silurian in the Caledonian Orogeny . The Iapetus had been completely subducted and ceased to exist. A new major continent, Laurussia , had emerged.

Some traces of the collision, such as the suture of the closure of the Iapetus, have survived to this day despite the overprinting of more recent mountain formations in the Appalachians on the North American east coast and in the Caledonian consolidated mountains of north-western Europe.