Quartzite plates from the St. Niklaus-Embd region with a view of the cleavage surfaces

Open pit of the roof panels above Lerchji, in the background Grächen .

In the entire Mattertal as far as Zermatt , the platy-splitting variety of quartzite was important as a material for roofing . Today, the quarrying of natural stone for roofing is largely a thing of the past in the entire Valais. The commercial quarrying of quartzite for this purpose, which took place in the area of ​​the municipalities of St. Niklaus and Embd , was able to last for a relatively long time until operations were closed in 2005. Names factor for the Kalpetranquarzit is the station of Kalpetran the Matter Valley, where the quartzite loaded or where the wagons were handled with elsewhere verladenem quartzite.

In the lower part of the western flank of the Mattertal , from St. Niklaus to Embd, quartzites with a thickness of 4 to 10 meters extend more or less parallel to the slope. They are part of a series of metasediments, the protoliths of which are from the Carboniferous to Triassic ages. The quartzite protolith was deposited in the late Permian or early Triassic, the metamorphosis took place in the course of the formation of the Alps . Tectonically, the sequence is in the Bernhard Nappe, which is assigned to the Middle Penninic .

As is typical for quartzites in general, the rock consists mainly of quartz . It contains feldspar and the light mica variety phengite in smaller proportions . There are also black, needle-shaped tourmaline crystals . The most striking feature of quartzite is its light green color as a result of the admixture of mica, which gives it a certain resemblance to glacial ice. Only in a very specific interval of the quartzite layer is the mica content just so high that, on the one hand, the rock can be split into relatively thin plates and, on the other hand, it still has a sufficiently high strength to be used as stone.

One of the several entrances to the tunnels of the Lochmatter quartzite quarries for underground mining. The narrow-gauge rails are also visible. 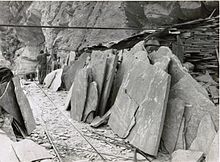 Columns of the quartzite blocks in plates in front of the tunnel entrances to the quartzite plate quarries Lochmatter. The narrow-gauge rails are visible again.

Stone slabs have been used for roofing buildings in Valais since ancient times. Johannes Stumpf noted in his travel report, published in 1544, that the "... roofs of the Gebeuwen are commonly covered with split stones and slabs".

The commercial mining of quartzites in Mattertal did not begin until 1929 by the St. Niklaus mountain guides Adolf Pollinger (1898–1980) and Franz Josef Biner (1893–1967). At the same time they established the commercial mining in the area of ​​the municipality of St. Niklaus. On December 2, 1934, the municipality issued a mining license for the first time. It was acquired at the time by the Geneva-based construction company Dumarest Eckert , whereupon a cooperation between this company and the Pollingers mining company came about.

On April 23, 1944, the St. Niklaus mountain guides and building contractors Erwin Lochmatter (1911–1987) and Ulrich Imboden (1911–1988) acquired the new concession from the community of St. Niklaus. Lochmatter took over the St. Niklaus quarries and managed their operations, while Imboden concentrated on managing the construction company. On October 24, 1954, the municipality of St. Niklaus extended the mining concession of Lochmatter and Imboden, with Imboden ceding his concession rights to Lochmatter on November 11 of the same year and the mining operation and construction company were now completely separate from each other. On March 16, 2005, a serious accident occurred in the quartzite slab quarries of the Lochmatter company in the area of ​​the municipality of St. Niklaus, in which the quarry owner Walter Lochmatter (1940-2005), a son of the company's founder Erwin, and his foreman were killed in an accident. Since then, quartzite mining has been suspended both in St. Niklaus and in the entire Mattertal, as these were the only still active quarries in the valley.

In 1945, when Erwin Lochmatter acquired the mining license, the story of commercial quartzite mining began in the area of ​​the municipality of Embd, which borders the municipality of St. Niklaus down the valley. In 1955 the concession and quarries in the Nigguflüe-Milacher-Embdbach area were transferred to the Biner family. The St. Niklaus mountain guide Anton Biner (1926–1996), a son of Franz Josef Biner, who had separated from his companion Pollinger before the concession for the St. Niklauser quarries at Lochmatter and Imboden was transferred, was the last operator of the Embder Fractions. Quartzite mining has stopped there since 1993.

In the first generation, more than 60 employees were employed in the quartzite plate quarries of the Lochmatter company. In the second generation, the number fell to around 20 employees in the course of increasing mechanization of the mining operations. Although no more quartzite is currently being mined in the Mattertal, quartzite slabs from the region are potentially still needed to preserve the appearance of the village in many of the historic village centers of Valais.

Location of the quartzite fractures

The quartzite quarries of St. Niklaus ("Quarzitplattenbrüche Lochmatter") are located in the north of the municipality of the same name on the lower left slope of the valley at about 1300  m above sea level. M. above Kipfen ("Chipfe") between the Bergegga ("Bärgegga"), a terrain notch that runs up the lower left valley flank around 2.5 km north of the village of St. Niklaus, and the valley of the Embdbach, which forms the border between the municipalities of St. Niklaus and Embd marked ( 46 ° 12 ′ 23 ″ N 7 ° 49 ′ 12 ″ E ). These are not typical quarries because the quartzite was extracted underground . The strata of rock dip there at around 40 degrees to the west. The approximately two to three meter thick interval with platy fissile quartzite was traced from the outcrop on the slope into the mountain, so that up to 600 meters long, west sloping tunnels were created. Due to their steep slope, the St. Niklaus quartzite quarries have no direct road access, which is very rare among European quarries. The quarry workers were therefore from Kipfen with a cable car from the lowest part of the slope on the right side of the valley, where at around 1000  m above sea level. M. the valley road runs to the quarries on the left slope of the valley at 1300  m above sea level. M. brought. The quartzite slabs were transported via several cable cars to their own loading station, Kipfen (loading platform I7II) , on the Brig-Visp-Zermatt railway , which is located below the road at around 920  m above sea level. M. on the right bank of the Vispa, southwest of the Kalpetran train station. 46.206388888889 7.82

The second area in which the quartzite of the Mattertal was commercially mined is located downstream of St. Niklaus in the area of ​​the municipality of Embd, northeast of the Embdbach. The quarries are located on the Wäng, around 700 m southeast of the village of Embd, on the southwestern edge of the municipality directly on the eastern flank of the Emdbach valley at around 1200  m above sea level. M. ( 46 ° 12 ′ 37 ″ N 7 ° 49 ′ 19 ″ E ). They can be reached via an access road from Embd. In contrast to the St. Niklauser quarries, here the quartzite was also mined over days. However, only the rock mined underground was comparable in appearance and quality to that from the St. Niklauser quarries. The quartzite from the Embder quarries was loaded at Kalpetran station ( 896.7  m above sea level ). 46.210277777778 7.8219444444444

The two loading tracks above ("Quarzitplattebrüche Lochmatter") and below the Kipfen Bridge were set up in 1961 and 1963, respectively. The upper loading track was in operation until the end of dismantling in 2005.

Facade of the La Poste culture and congress center in the district capital of Visp , clad with the green quartzite from St. Niklaus-Embd

More than 1,500 tons of quartzite stone were extracted annually in the area of ​​the municipality of St. Niklaus. The sales of the material were structured as follows:

The most frequent foreign deliveries went to Germany , but many also went to Belgium or the Netherlands .

Quartzite blocks were blasted out of the rock from the tunnels, which were up to 600 meters long. These heavy stone blocks were loaded onto special rolling wagons and pulled into the light of day on narrow-gauge rails, where they were split into layers with a hammer and chisel. The plates were sorted according to size and quality. The panels with a regularly greenish and even surface were processed into terrace panels, steps, window sills, etc., with the edges being milled to a certain extent or using a template. The surface of the plates remained split and was not processed further.

In modern times, this stone was also used in the interior as a sophisticated alternative to other slab-like, cracked rocks in the Alpine region. The high proportion of manual labor during its dismantling was a strengthening factor for the jobs at the dismantling site. In Switzerland it was a sought-after material that was only available in limited quantities.

The quartzite from the St. Niklaus-Embd region first achieved regional fame because it had been used for roof coverings in the surrounding villages for a long time. For this purpose, 1–4 cm thick panels were used, which the roofer fastened to roof trusses in heavy construction using a special technique. Its striking green color gives the village roof landscape in the Mattertal a special note, whereby after a long time an orange-red lichen colonizes these quartzite coverings.

Roofing with natural stone occurs only in a few European regions. Their execution includes manual skills and knowledge that have become very rare. Furthermore, the respective roof structure must meet special static requirements. Natural stone slabs with a total mass of 20 to 30 tons can be placed on the roof of a medium-sized house in Valais. For this reason, such roof coverings are a remarkable and rather untypical detail of settlement architecture. In addition, the light green tone of the quartzite from the Mattertal gives a village roof landscape an unusual appearance.

In Valais, the traditional use of natural stone as a roofing material is found to be part of the architectural heritage from the point of view of monument preservation. Many Swiss municipalities are paying attention to the preservation of old roofs of this type. A similar development can also be seen in neighboring Italy.

Quartzite was also mined in other places in the region. At Saas Fee it was obtained as a house stone, at Bramois a light gray to light green and coarse bank for the production of kerbstones, wall blocks and steps. Light green and thin-plate quartzite was also quarried in Graubünden near Avers . In the Fex Valley there was extraction work on the Silseralp in thin-plate, greenish-gray to blue-gray quartz phyllites for roofing.

Roofing with natural stone slabs is not uncommon in the Valais Alps and neighboring areas. Long ago the population used the regionally available rocks for this purpose, for example gneiss (in Ticino , two- mica gneisses near Eisten ), silica slate (near Sembrancher ), silica limestone slate (near Leytron ), clay slate (near Salvan , Ried-Brig ), green slate / Prasinite (in the regions of Wallis , Valtellina , Aosta Valley ) and Phyllite (near Nendaz , Brig , Orsières , Termen , Mörel ) if they are suitable from a technical and technical point of view. Application examples can also be found in the Swiss cantons of Graubünden and Uri .