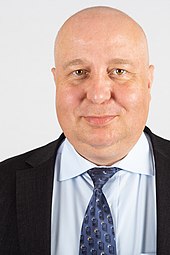 Andreas Schmidt received his doctorate in 2002 from the University of Halle with a thesis on the forced unification of the SPD and KPD in the province of Saxony. From 2003 to 2007 he was the managing director of the board of trustees "1200 Years Halle an der Saale". He then took on tasks for the SPD parliamentary group in the city council of Halle , initially as an employee until 2009, then as managing director until 2015. Subsequently, he headed the ministerial office in the Ministry of Education and Culture of Saxony-Anhalt.

Schmidt served as Juso chairman in Halle from 1995 to 2003 and held various party offices in the SPD in the following years. He was a member of the Halle city council from 1999 to 2009.

Schmidt received a mandate on his party's state list in the state elections in Saxony-Anhalt in 2016 . On January 24, 2020, he was elected chairman of the SPD state association of Saxony-Anhalt alongside Juliane Kleemann .

State chairwoman of the SPD Saxony-Anhalt