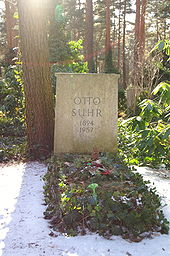 Otto Suhr's grave of honor at the Zehlendorf forest cemetery

At the age of nine he moved with his family to Osnabrück , four years later to Leipzig . In 1914 he began his studies in economics , history and newspaper studies , which he had to interrupt for five years due to participation in the First World War . In 1922, at the age of 28, he was a workers' secretary at the General German Trade Union Federation . The doctorate took place the following year (1923) in Leipzig on "The professional constitutional movement in Germany up to the revolution of 1848 ". He was active as a journalist and was a lecturer on economic and social policy topics at several adult education centers in North Hesse and Thuringia .

In November 1925, Suhr moved to Berlin as head of the economic policy department at the headquarters of the General Free Employees' Association (AfA) , and examined the economic and socio-political situation of employees in the Weimar Republic . In the Berliner Volkszeitung at the end of 1932, he predicted that the Nazi regime that was threatening at the time would last twelve years.

From 1933 to 1935 Otto Suhr worked as an editor for the Berlin weekly magazine Blick in die Zeit as well as a freelance business journalist, u. a. for the Frankfurter Zeitung and the magazine Deutscher Volkswirt . In 1936 he hired Andreas Gayk as his freelance researcher. At that time, Suhr lived at Kreuznacher Strasse 28 in Wilmersdorf .

After the seizure of power by the National Socialists Suhr belonged to the union underground and the resistance circle around Adolf Grimme on. Before the war began, the Reichsschrifttumskammer asked him several times to separate from his wife Susanne, who came from a Jewish family. Otto Suhr categorically refused and, thanks to the intervention of the Frankfurter Zeitung , was able to continue working as a journalist. Nevertheless, the Gestapo wanted him several times, but was able to go into hiding at times. Around 1944 Suhr was to be drafted into the Todt Organization, and his wife Susanne was threatened with deportation. When he was threatened with arrest towards the end of the war, he managed to escape at the last moment. He and his Jewish wife found accommodation with the Berlin journalist Herta Zerna , who protected several Jewish citizens from access by the Gestapo.

At the end of May 1945 Otto Suhr headed an economic policy department in the magistrate, was involved in the reconstruction of the SPD and the trade unions in the four-sector city of Berlin, and vehemently opposed the merging of the SPD and KPD to form the SED ; for the newly formed SPD in the western sectors of Berlin, he became its first general secretary and organized the SPD's first election campaign in 1946, which the Social Democrats won with 48.7 percent of the vote. As head of the city council, he gave up the office of general secretary. In the newly founded Free German Trade Union Federation FDGB, there was a dispute between communists and social democrats, which led to the establishment of the Independent Trade Union Organization (UGO) in the western sectors in 1948 , of which Otto Suhr was one of the main founders.

Otto Suhr was married to Susanne Suhr (1893–1989), née Pawel, and last lived at Dahlemer Hüninger Strasse 4. He died of leukemia on August 30, 1957 in Berlin and was buried in the Zehlendorf forest cemetery in Berlin-Nikolassee . The grave site in Dept. IX-W-374/375 is one of the honor graves of the State of Berlin .

Wife Susanne Suhr resumed her journalistic work in 1945 and was an SPD member of the Berlin House of Representatives from 1957 to 1963.

In 1948, as a non-voting representative of Berlin, he was a participant in the Constitutional Convention on Herrenchiemsee , which was supposed to work out a draft constitution that was to serve as a basis for the Parliamentary Council. The work of the Convention thus formed the basis for the Basic Law . He was a member of the German Bundestag from 1949 to 1952. A particular concern for Suhr was the direct election of Berlin members to the German Bundestag, but his efforts in the Bundestag as well as against the Western allies were unsuccessful and only became a reality after reunification in 1990.

From 1948 to 1955, Suhr was director of the German University of Politics , which was incorporated into the Otto Suhr Institute for Political Science at the Free University of Berlin , founded in 1959 . From 1951 to 1953 Suhr was a member of the board of directors of the student loan association  . V.

In the elections to the Berlin House of Representatives in December 1954 , Suhr was the top candidate of the SPD , which won a narrow absolute majority of the seats. Despite this, Suhr formed a coalition with the CDU and was elected mayor of Berlin in January 1955 . On July 21, 1957, he was regularly elected President of the Federal Council , but died before taking office, so that Willy Brandt also took over this office as his successor in the office of Governing Mayor.

In 1954 Suhr received the Grand Cross of the Federal Cross of Merit .

In Berlin, in addition to the Otto Suhr Institute since 1957 Otto-Suhr-Allee and the 1958 Berlin West in the Wedding district opened Otto Suhr library named in the Schönwalder street after him, which was closed 1997th

From 1946 to 1950, Otto Suhr, together with Louise Schroeder, was the publisher of the bi-monthly publication The Socialist Century, published in Berlin (print run: 20,000, 10,000 during the blockade).

President of the Berlin House of Representatives