Bremen mayors are persons who held or hold the office of mayor in the state of the Free Hanseatic City of Bremen and in the city of Bremen . 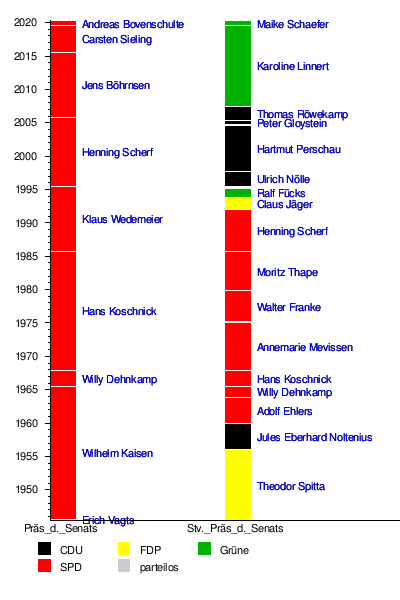 The President of the Senate and another Senator to be elected by the Senate are mayors (due to Hanseatic tradition).

The current mayor and president of the Senate is the SPD politician Andreas Bovenschulte , who leads a red-red-green coalition . Andreas Bovenschulte's deputy is Mayor and Senator for Climate Protection, Environment, Mobility, Urban Development and Housing Construction Maike Schaefer from Bündnis 90 / Die Grünen .

Mayor as representative of the President

In the state constitution it was stipulated: The President of the Senate is first represented by the other Mayor and, if necessary, by another member of the Senate appointed by him (Art. 115 Para. 1 LV). The term Second Mayor does not apply in Bremen. The mayors are also senators.

A large number of the mayors of the city of Bremen from 1344 to the present day are listed in a list of Bremen's mayors .

Since 1344, the mayor has been at the head of the ruling third of the council in the Bremen town council of the Imperial Freyen imperial and Hanseatic city .

From 1398 to 1426 and again from 1433 to 1852/53 four mayors ruled simultaneously (there were two mayors in between) and 20 councilors, five each from each of the four districts (parishes). When a mayor resigned, a new mayor was always elected. It was therefore divided into four lines until 1852/53 . The four lines resulted from the fact that the four parishes - Liebfrauen , Ansgarii , Martini and Stephani  - each had a mayor. The mayors' reigns overlapped. The mayors of the Hanseatic city were appointed by the council (since 1822 Senate).

During the French period in Bremen from 1811 to 1813, a Maire (mayor) and the Munizipalrat (municipal council) were appointed by the French prefect of the Weser estuary department .

After 1813 the council again consisted of four mayors and 24 councilors, most of whom were called senators. Since 1822 the "Hochedlen Hochweise Rath" became the Senate of the Free Hanseatic City of Bremen . Most of the mayors remained in office until their deaths.

In 1849 the council constitution provided for in the old Bremen city law was replaced. In 1852, after the revolution , a new Senate Election Act determined that the citizens and the Senate each appointed five electors. These 10 electors chose three candidates from five candidate proposals from the city council, from which the Senate then elected the new Senator. The Senate selected the two mayors from among their ranks. When a mayor resigned, a new mayor was always elected. Most of the mayors in the 19th century were lawyers.

Between 1882 and 1918, two mayors were elected from the Senate for four years each. The Senate appointed one of them President of the Senate for a calendar year. In those 36 years there were eleven (or twelve) presidents, most of whom served multiple terms; Alfred Dominicus Pauli had seven terms in office alone.

After the Bremen Council Republic in January 1919, citizenship elections were held again. Since then, the President of the Senate, as head of state of the Free Hanseatic City of Bremen, has also been mayor and mayor of the city of Bremen. For traditional, Hanseatic reasons, there was and still is in Bremen, in contrast to most major German cities, only the title of mayor and not mayor. The Vice President of the Senate and Mayor also has the title of Mayor and Senator.

President of the Senate and mayor at the same time

Representative of the president

Since 1945 there have been the following mayors as representatives of the President of the Senate: