The election for the 8th state parliament of Mecklenburg-Western Pomerania took place on September 26, 2021.

On the same day, the federal election , the election to the Berlin state parliament and runoff elections for the local elections in Lower Saxony were held.

The state parliament of Mecklenburg-Western Pomerania is elected by personalized proportional representation, similar to the federal election. The state parliament basically consists of 71 seats, which are distributed to the parties in proportion to the second votes according to the Hare-Niemeyer procedure . 36 mandates go to direct candidates elected with a relative majority of the first votes . As far as possible, the direct mandates are offset against the parties' right to a seat; further mandates are awarded via closed state lists .

There is a five percent hurdle and there is no basic mandate clause . The term of office is five years.

Schwerin Castle , seat of the state parliament of Mecklenburg-Western Pomerania

Nominations for election are only to be submitted after the announcement of the regional returning officer. This announcement was published in the official gazette for Mecklenburg-Western Pomerania on March 29, 2021. District election proposals must be submitted in writing to the responsible district or city electoral committee and state lists to the regional election committee no later than July 13, 2021 (75th day before the election) by 4 p.m.

Parties that on the day of the call for nominations have not been represented in the state parliament or in the German Bundestag since its last election with at least one representative elected for them in Mecklenburg-Western Pomerania without interruption can only submit nominations if they are the State Returning Officer have announced their participation in the election in writing by June 10, 2021 (108th day before the election) by 6 p.m. and have notified the state election committee of their party status no later than June 24, 2021 (94th day before the election) for participation in the State election has been established.

Parties that have been represented in the Landtag or in the German Bundestag since the last election on the basis of their own election proposals with at least one member elected for them in Mecklenburg-Western Pomerania do not need to provide support signatures. All other parties must also submit valid supporting signatures in the number required by law when submitting their nomination.

The responsible electoral committee had to decide on the admission of the submitted nominations by August 5, 2021 (52nd day before the election) at the latest. Its meeting took place on August 3, 2021; the 24 lists announced on July 14 were confirmed.

The SPD has been the strongest force in Mecklenburg-Western Pomerania since 1998 and has provided the Prime Minister, initially in a red-red coalition and since 2006 in a red-black coalition, with Erwin Sellering succeeding Harald Ringstorff in the Prime Minister's office in 2008.

In the state elections in September 2016 , the SPD was again the strongest party with just over 30 percent ahead of the AfD and CDU , but suffered losses like the CDU, the Left and the Greens . When it first took part, the AfD immediately became the second strongest force with just over 20 percent; The Greens and FDP , on the other hand, missed their entry into parliament.

After explorations with leftists and the CDU, Erwin Sellering again formed a red-black state government. On November 1, 2016, he was re-elected Prime Minister with 41 out of 71 votes and then appointed his cabinet.

On May 30, 2017, Prime Minister Sellering resigned for health reasons. Manuela Schwesig was then elected the first female Prime Minister of Mecklenburg-Western Pomerania on July 4, 2017. She took over all of Sellering's ministers in her cabinet. In May 2019, however, the cabinet was restructured after Finance Minister Mathias Brodkorb (SPD) resigned due to conflicts with Manuela Schwesig and Education Minister Birgit Hesse succeeded the late President of the State Parliament, Sylvia Bretschneider .

According to the polls, the six largest parties are running with the following top candidates:

In addition to the six parties represented in the state parliament or from Mecklenburg-Western Pomerania in the Bundestag, 19 other associations had reported their participation in the election to the state electoral authority, of which 18 party status was determined; the "German Justice Party" (DEGP) was not recognized as a party. All 24 parties had submitted state lists by July 13, 2021. With the exception of the parties represented in the Landtag or Bundestag (SPD, AfD, CDU, Linke, Greens, FDP), the parties had to provide evidence of 30 support signatures. 341 applicants are running on the 24 approved state lists. 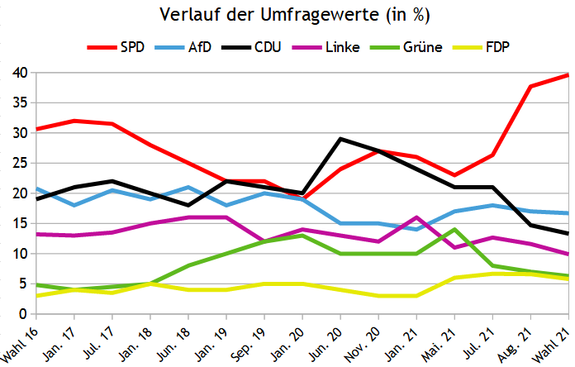 Survey values ​​averaged over monthly survey results, from the 2016 election to September 9, 2021