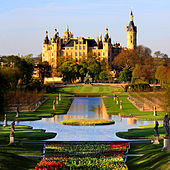 Schwerin Castle , seat of the state parliament of Mecklenburg-Western Pomerania

The election for the 7th state parliament of Mecklenburg-Western Pomerania took place on September 4, 2016. At the same time, mayoral elections were held in several cities in the state, including the state capital Schwerin . The SPD and CDU signed another coalition agreement and continued the red-black coalition (→ Sellering III cabinet ).

The state election is a personalized proportional representation similar to the federal election. The state parliament basically consists of 71 seats, which are distributed to the parties in proportion to the second votes according to the Hare-Niemeyer procedure . 36 mandates go to direct candidates elected with a relative majority of the first votes . The direct mandates - as far as possible - are credited to the parties' right to a seat, further mandates are awarded via closed state lists . If a party wins more mandates in the constituencies than it is entitled to according to the second vote ratio, these remain with the party ( overhang mandates ), the other parties receive compensatory mandates . However, the number of compensation mandates is at most twice the number of overhang mandates. There is a five percent hurdle and there is no basic mandate clause . The term of office is five years.

The ruling SPD was again the strongest force in the 2011 state elections with a share of 35.6 percent of the vote. Thanks to strong gains of 5.4 percentage points, it was also able to significantly expand its distance from the CDU . The CDU lost 5.8 percentage points and gained 23.0 percent of the vote. It was the historically worst state election result for the CDU in Mecklenburg-Western Pomerania. The left was able to increase slightly to 18.4 percent. Bündnis 90 / Die Grünen were able to more than double their value in the area code with a vote share of 8.7 percent. It is the best result so far in an eastern German state (excluding Berlin). The NPD came to six percent and, despite slight losses, made it into the state parliament for the second time in a row. The FDP reached 2.8 percent and thus lost more than two thirds of its share of the vote. After an election period in the Schwerin state parliament, the party clearly missed the re-entry.

A grand coalition of the SPD and CDU was formed under Prime Minister Erwin Sellering.

Election results in Mecklenburg-Western Pomerania since 2006

The following table shows the results of the last Bundestag, European and Landtag elections in Mecklenburg-Western Pomerania.

Political parties and - in the constituencies - individual applicants can stand for election. Parties that are not represented in the state parliament or the Bundestag had to report their participation to the state returning officer by May 19, 2016 and to submit the supporting signatures of 100 eligible voters for the state list by June 21, 2016 . State lists were approved by the following parties (sorted in the order on the ballot paper):

Candidates from the parties and individual applicants by age group

Parties represented in the state parliament

Prime Minister Erwin Sellering was again chosen as the top candidate of the SPD at the state party conference on April 30, 2016 . He received 87 of 94 valid votes (92.6%). The President of the State Parliament, Sylvia Bretschneider, followed in second place . The campaign slogan was “Together on course”. The SPD demanded, among other things, the full right to vote at 16 and parents to relieve daycare fees. People who earn their money with art and culture should be supported and immigration should be seen as enrichment. The goal of the election was "to become the strongest force and thus also to provide the Prime Minister again".

As in 2011, the CDU's top candidate was the Interior Minister of Mecklenburg-Western Pomerania, Lorenz Caffier . The campaign slogan was "Home in focus". Internal security was the main focus of the CDU. Among other things, she called for more police stations, but also in the judiciary and in the protection of the constitution. A State Secretary for so-called “structurally weak regions” should be created in order to strengthen structurally weak regions. In refugee policy, the CDU advocated a hard line and the idea of ​​a “German guiding culture”. The election campaign goal was "to provide the strongest force and the prime minister".

As in 2011, the Left elected former Labor Minister Helmut Holter as the top candidate. The campaign slogan was “For the love of MV”. The left wanted to score with social issues. She called for free daycare places and more staff in the care sector. Disadvantaged regions should be strengthened through a 50 million development program in order to create comparable living conditions in all parts of the country.

The Greens' top candidate was Silke Gajek . The campaign slogan was “For the country and the people”. In their election manifesto, the Greens opposed factory farming and demanded that the municipalities share in the profits in the energy transition. The protection of the constitution should be reformed and better controlled by parliament. Transparency should be improved (e.g. public meetings of the Committee on Budgets). The election goal was "Repeat the 2011 election result with 8.7%".

Parties not represented in the Landtag

The top candidate of the FDP was the 33-year-old French born Cécile Bonnet-Weidhofer . The goal of the election was to return to the state parliament with the main topics of education, infrastructure and economy.

The state association of the Human Environment and Animal Protection Party (Tierschutzpartei) was founded in 2014 and ran for the first time in the state election. The guiding principles of the party were consistent nonviolence, comprehensive empathy with the rest of the world and a voice for everyone who had no voice themselves. In particular, she advocated animal rights, animal welfare, environmental protection and human rights. She called for an end to factory farming, the subsidization of conventional agricultural industries and the environmental damage and health risks that would result from conventional animal husbandry and agriculture. She saw the agony of animals in the agricultural industry as systemic and wanted to achieve a change primarily on the political, administrative and legal level, in addition to sensitizing consumers to organic vegan agriculture based on solidarity. The state election program comprised 30 pages, which included all policy areas; The focus was also on social justice and educational policy. The top candidate was Robert Gabel from Greifswald.

The Pirate Party called for more democracy (simplification of referendums) and transparency. Internet should be a basic right for everyone.

The top candidate for the family party was 33-year-old Dirk Martin from Rostock. MEP Arne Gericke ran for fourth place on the list . The family party called for the introduction of a state parental allowance to make living space MV more attractive and to relieve families financially. In addition, family voting rights should be introduced. Obstetrics was an important focus of the party. Maternity wards should be available everywhere and midwives should be supported. Learning materials and school transport should be free of charge. Debt shouldn't be placed on the back of the next generation.

The free voters in Mecklenburg-Western Pomerania focused on social issues. Free public transport, the abolition of Hartz IV and the payment of old connection fees were their goals.

The top candidate of the AfD was the 46-year-old former radio presenter Leif-Erik Holm . The campaign slogan was “For our country and our children”. The AfD wanted women to have more children again (e.g. through family loans) and advocated school uniforms. She rejected immigration and security guards were supposed to ensure more order.

The Mindful Democrats consisted mainly of previously independent local politicians and former CDU members and had a few mayors in their ranks. They were running for the first time in a state election and wanted to strengthen the municipalities in particular and save money on administration and politics.

The top candidate of the DKP was 29-year-old Robert Kühne from Schwerin. The main focus of the DKP was the fight against social cuts. This should be prevented, among other things, through higher wages and free passenger transport. Right-wing agitation should be fought and the protection of the constitution should be dissolved.

The top candidate for Alliance C - Christians for Germany was Christian Hauser from Boizenburg. The party, which was formed in 2015 through the merger of AUF and PBC , was against abortion and wanted to support families with a parenting salary. Christian values ​​are the foundation for the liberal and ethical constitutional state and should therefore be strengthened.

The Free Horizon party was only founded in 2016 and was therefore running for the first time. She particularly campaigned against the further expansion of wind power in Mecklenburg-Western Pomerania and for more direct democracy .

For the Sunday question, opinion polls have given the following values ​​since the state elections in 2011; Election results for comparison.

When asked who the citizens would directly elect to be prime minister, the polling institutes gave the following values: 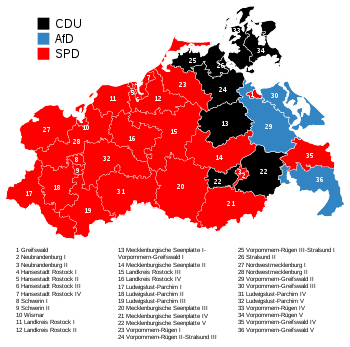 The AfD achieved almost 21 percent of the second votes and moved into the ninth state parliament in Germany; it was just as successful as in the state elections in Saxony-Anhalt in March 2016 . All parties represented in parliament to date have suffered significant losses. The SPD remained the strongest force with around 30 percent, but lost five percentage points. The CDU sank from 23 to 19, Die Linke from 18.4 to 13 percent and the Greens slipped from 8.7 percent of the vote below the five percent hurdle to 4.8 percent. For the first time since 2011, the Greens are no longer represented in all state parliaments. The NPD also failed to re-enter the state parliament, which means that it is no longer represented in any German parliament. The FDP increased slightly compared to the last state election, but again failed to make it into the state parliament.

Of the small parties, only the Animal Welfare Party succeeded in overcoming the 1% hurdle, which is relevant for party funding , with 1.2% . Unlike in 2011, pirates, family parties and free voters no longer achieved this proportion.

Of the 36 constituencies, the SPD won 26, two more than in 2011, the CDU only seven compared to twelve and the AfD was able to prevail in three constituencies.

Taking into account the inter-party rejections, only the continuation of the incumbent red-black coalition and a red-red coalition were mathematically possible.

For the elected MPs, see the list of members of the Mecklenburg-Western Pomerania State Parliament (7th electoral term) .

After brief exploratory talks with the CDU and the left, the SPD decided on September 16 to begin coalition negotiations with the CDU. On October 12th Erwin Sellering and Lorenz Caffier announced the conclusion of the coalition negotiations. It was already leaked relatively early that Birgit Hesse would switch from the Ministry of Social Affairs to the Ministry of Education. There were also shifts in competencies. The Ministry of Social Affairs had to hand over the areas of work and health to the Ministry of Economic Affairs, which in turn handed over the construction area to the Ministry of Infrastructure. At the urging of the CDU, the post of Parliamentary State Secretary for Western Pomerania was created, but this went to Patrick Dahlemann from the SPD. The nomination of the Stralsund public prosecutor Sascha Ott as minister of justice met with criticism, since the new cabinet should only include two women. On October 22nd, the CDU withdrew Otts' nomination because he “ liked ” the Facebook page of the AfD district association of Northwest Mecklenburg and comments critical of Islam . Katy Hoffmeister, Head of Personnel at Rostock University Hospital, became the new Minister of Justice . On the same day, both parties agreed to the coalition agreement at their party congresses in Stralsund (SPD) and Wittenburg (CDU). On November 1, Erwin Sellering was re-elected Prime Minister with 41 out of 71 votes and the cabinet was sworn in.

Elections to state parliaments in Germany in 2016