The state election in Mecklenburg-Western Pomerania in 2002 was the fourth election of the state parliament since the re-establishment of the state of Mecklenburg-Western Pomerania . It took place on September 22, 2002 , at the same time as the federal election. The SPD was again the strongest party with clear gains. The PDS , which had ruled in the nationwide first red-red coalition since 1998 , lost heavily. The SPD-PDS government under Harald Ringstorff was continued ( Cabinet Ringstorff II ). The CDU could only achieve slight profits. All other parties failed again at the five percent hurdle .

The fourth state election in Mecklenburg-Western Pomerania was carried out on the basis of the constitution of May 23, 1993 and the state election law for the state of Mecklenburg-Western Pomerania of December 14, 1993. The electoral process provided for a first and a second vote ; the distribution of the 71 mandates was decided solely on the proportion of the second votes; it was calculated using the Hare-Niemeyer method . The five percent hurdle and a basic mandate clause applied to three direct mandates won. The legislative period was four years.

The red-red coalition stood for election under the Social Democratic Prime Minister Harald Ringstorff. This first government with the participation of the SED successor party PDS in Germany had provoked heated discussions nationwide. Critics spoke of a “taboo break” or a “fall from man”, others of a “normalization” in dealing with a democratically elected party that received almost a quarter of the votes. When Ringstorff was elected Prime Minister, eight MPs from his own camp refused to vote, which was taken as a clear indication of the reluctance in parts of their own party to cooperate with the post-communist PDS.

Mecklenburg-Western Pomerania made no economic progress during the third legislative period. The unemployment rate was still 20%, the gross domestic product had been falling continuously since 1999 and various attempts at major industrial projects such as the establishment of Airbus in Rostock had failed.

Since the state elections in 1994 , only three parties were represented in the Schwerin state parliament, the CDU had been the only opposition party since 1998 - previously the PDS from 1994 to 1998. Both the FDP and Bündnis 90 / Die Grünen as well as the right-wing extremist parties failed because of the threshold clause in the last election.

The top candidates for the 2002 state election were Prime Minister Harald Ringstorff for the SPD and the two parliamentary group leaders in the Schwerin state parliament, Eckhardt Rehberg for the CDU and Angelika Gramkow for the PDS.

As in 1994 and 1998, the 2002 state elections were heavily influenced by the federal elections that took place on the same day. As in the polls for the Bundestag election, the CDU was still, in some cases significantly, ahead of the SPD in polls at state level up to a few weeks before the election. In the federal and state levels, however, shortly before the election, the mood turned in favor of the SPD. Federal political issues that basically had nothing to do with state politics led to a surge in popularity for the federal government under Gerhard Schröder . The fight against the Elbe flood or the rejection of Bundeswehr missions in Iraq partially overshadowed the state election campaign. 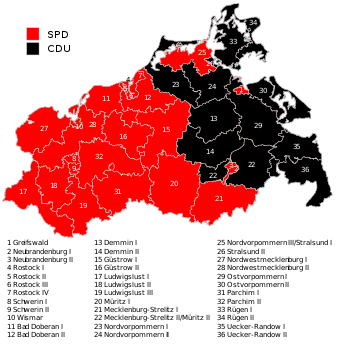 Ringstorff's strategy of wanting to “disenchant” the PDS in the day-to-day business of governing worked, the PDS lost eight percentage points and was the clear loser of the election. The CDU, which had determined the political landscape of Mecklenburg-Western Pomerania in the early years after the fall of the Wall and was the Prime Minister from 1990 to 1998, was only able to gain slightly. The FDP was able to almost triple its poor result of 1998, but failed with 4.7 percent but just under the five percent hurdle and remained outside parliament for the third time in a row. Bündnis 90 / Die Grünen, which gained 1.9 percentage points nationwide, could not benefit from the federal trend in the state elections. The state result for the federal election was 3.5 percent above that of 1998, but for the state parliament they received only 2.6 percent, which was even slightly below the result of 1998. The right-wing extremist parties played no role ( NPD 0.8 percent, Republicans 0.3 percent), but the right-wing populist Schill party achieved a respectable 1.7 percent.

The 2002 election thus consolidated the three-party system in Mecklenburg-Western Pomerania, which had existed since 1994, with the SPD now undisputedly the leading political force. The SPD won 33 seats (an increase of six seats), the CDU 25 (+1) and the PDS 13 (-7).

The turnout fell from 79.4 percent to 70.6 percent, but thanks to the amalgamation of the Bundestag and Landtag elections, it remained at a relatively high level.

The SPD continued the red-red coalition with the PDS. Regardless of the shifts in power, the PDS retained its three ministerial posts (environment, labor / construction and social affairs); there were only a few personnel changes.