Constitution of the state of Mecklenburg-Western Pomerania

It was drawn up by a constitutional commission between January 31, 1991 and April 30, 1993; the draft was submitted to the first state parliament and approved by it without changes on May 14, 1993 with a two-thirds majority. On May 23, 1993 the constitution came into force provisionally. On June 12, 1994, the referendum required by Art. 80 Constitution MV to confirm the constitution was carried out. It was accepted with 60.1% of the valid votes cast. The constitution has been amended four times so far, most recently in June 2011.

The constitution of the state of Mecklenburg-Western Pomerania is divided into four sections: basic principles, state organization, state functions and final provisions. 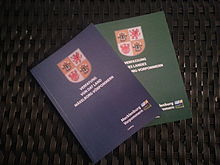 The section on the basics contains the form of government, fundamental rights and the goals of the state . Mecklenburg-Vorpommern is followed by a republican , democratic , social and obligated party the protection of natural resources law . Article 5 (3) of the MVD dynamically integrates the basic rights and civil rights of the Basic Law for the Federal Republic of Germany by declaring them to be directly applicable law across the board. In the following articles, certain basic rights, which are already part of the reference to the Basic Law, are emphasized again. This applies to data protection and information rights, freedom of art and science, equal opportunities in education, churches and religious communities and the right to petition. The national goals are u. a. formulates efforts to protect the environment and the protection of minorities.

The section on the functions of the state begins with provisions on law-making and constitutional amendments. Legislative initiatives can be introduced by the state government, from the center of the state parliament and by the people. Artt. 59 and 60 Verf MV enable popular initiatives , referendums and referendums . However, budget, tax and salary laws constitute inadmissible items for popular initiatives, requests and decisions. Then follow in Art. 61 to 68 Verf MV provisions on the budget and auditing, followed by provisions on state and self-administration . The self-administration of the municipalities already guaranteed by Article 28, Paragraph 2 of the Basic Law is specified in more detail therein. In addition, it is permitted to set up landscape associations with the right to self-administration to maintain and promote, in particular, historical, cultural and scenic features of the regions of Mecklenburg and Western Pomerania. Finally, the following two articles regulate jurisdiction: It is exercised in the name of the people and is independent.

The section on the final provisions includes a. Provisions for the delivery of the constitutional text of the constitution for the state of Mecklenburg-Western Pomerania and the Basic Law for the Federal Republic of Germany to pupils when they are discharged from school and linguistic equality of official and functional titles.

Laws to amend the constitution require a two-thirds majority of the members of the state parliament. It is protected by Art. 56, Paragraph 3 of the MV from changes that contradict human dignity or the principles laid down in Article 2 of the MV (republican, democratic, social and constitutional state that is obliged to protect the natural foundations of life). It is also possible to change the constitution through a referendum. At least two thirds of the voters must agree, which must represent at least half of the eligible voters.

So far the constitution has been amended four times:

State constitutions in the Federal Republic of Germany