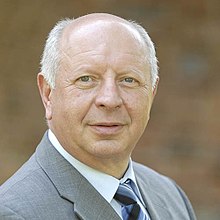 From 1990 to 2005 he was chairman of the CDU parliamentary group and from 2001 to 2005 regional chairman of the CDU in Mecklenburg-Western Pomerania and has been a member of the German Bundestag since 2005 . Eckhardt Rehberg is budget policy spokesman for the CDU parliamentary group in the German Bundestag. Since 2018 he has also been a member of the Supervisory Board of Deutsche Bahn AG. From March 2020, following the resignation of Vincent Kokert , until the election of Michael Sack on August 7, 2020, he temporarily took over the state chairmanship of the CDU Mecklenburg-Western Pomerania .

After completing his vocational training with a high school diploma as a skilled worker for data processing in 1973, Rehberg did his military service in the National People's Army and then worked in data processing from 1975 to 1989. In addition to the professional activities he graduated from 1977 to 1983, a university - distance learning in Berlin and Dresden, which he ended as "graduate engineer in information processing," which the West German "Dipl.-Ing. ( FH ) ”. In 1984, at the suggestion of the local CDU (GDR block party), he was appointed district judge at the Ribnitz-Damgarten labor court.

After the fall of the Wall , he took over the management of the Ostsee-Schmuck company in 1990 .

Rehberg is Catholic, married and has two sons.

Rehberg joined what was then the GDR CDU in 1984 and was a member of the GDR CDU's executive committee between 1989 and 1990. Rehberg was from 1990 to 1993 chairman of the CDU district association Ribnitz-Damgarten and from 1991 also belonged to the CDU state executive committee of the CDU Mecklenburg-Western Pomerania , initially as deputy chairman. From 2001 to 2005 he was its state chairman (predecessor: Steffie Schnoor , successor: Jürgen Seidel ).

For the state elections in 2002 , Rehberg was nominated on November 3, 2001 as the top candidate of the CDU for the office of Prime Minister of Mecklenburg-Western Pomerania. The CDU received significantly fewer votes than the SPD (31.4 to 40.6 percent) - incumbent Harald Ringstorff (SPD) ran again - and remained in the opposition.

On April 8, 2017, he was elected one of three deputies of the new chairman Vincent Kokert at the state party conference of the CDU Mecklenburg-Western Pomerania .

He is also a member of the trust committee for the secret budget of the federal intelligence services .

Rehberg was CEO of Hansa Rostock from 1997 to 2001 . After almost 20 years, he resigned from the Ostseeklub in autumn 2015. Close links between the club's management and the ultra scene were decisive for this.